Home » Which Countries Pay the Most and Least for Spotify Premium? 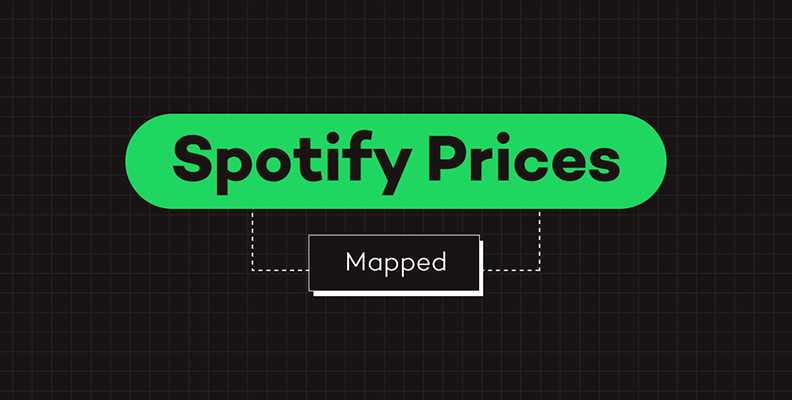 Which Countries Pay the Most and Least for Spotify Premium?

Spotify is the music streaming platform of choice for 130 million paying subscribers. The service’s 45 million-song catalog, high-quality playback, and “laid-back” playlists make it a no-brainer for the burnout generation. In a couple of clicks, Spotify takes your ears to a better place.

But while Spotify is an affordable way to listen to music, not everybody gets a good deal. The price of a monthly Spotify Premium subscription differs around the world, and the value you get also depends on what you earn.

CashNetUSA found the monthly subscription fee for each of the 78 countries where Spotify is available. Then we used World Bank data to compare the local cost with the average national wage in each country. Finally, we used our research to create this new series of maps showing which Spotify territories get the best and worst value for money.

Where in the World Do You Get More Spotify for Your Salary?

The proportion of your monthly wage that you need to spend to get a Premium subscription depends on how much you earn and how much Spotify costs in your area. Our first map reveals which countries get the best value Spotify deal by comparing the national average salary to the local Spotify price. The color range goes from green (cheapest) to red (most expensive). 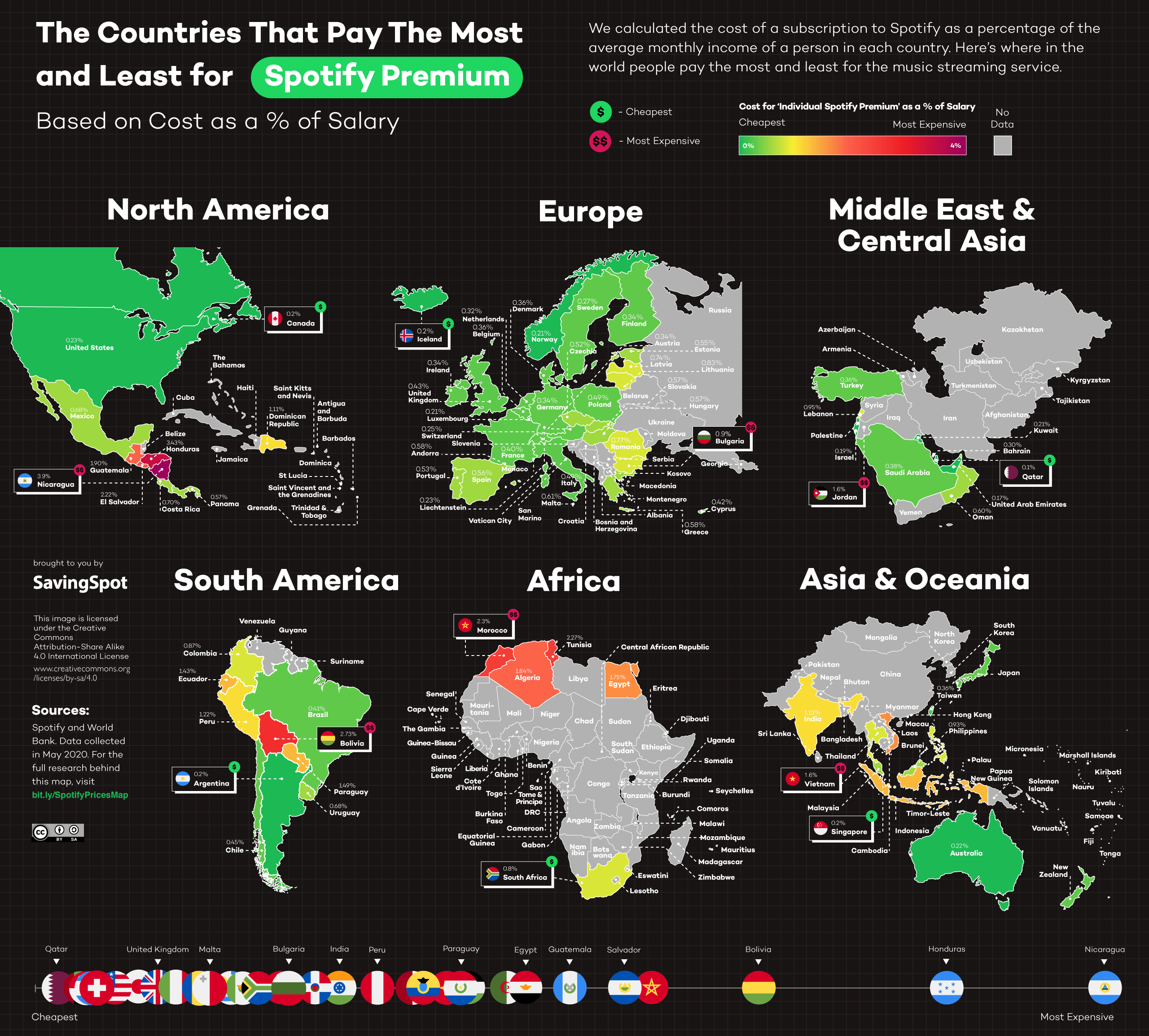 There aren’t many places in the Middle East where you can get Spotify, but Qatar is one of them, and it has the best value in the world. That’s because the average monthly wage in Qatar is $3,994.42. Spotify costs just five bucks, or 0.12% of the average paycheck. The worst value is in Nicaragua (3.92%). Here, Spotify costs a full dollar more than in Qatar despite an average monthly take-home of $152.70.

The Cost of a Monthly Spotify Premium Subscription in Every Country

Our second map shows the international price of Spotify in absolute terms, from lowest price (green) to highest (red). The most expensive country is Denmark, where the price is 99 crowns – the same as in neighboring Sweden, the home of Spotify. However, 99 Danish kroner converts to $14.39, while 99 Swedish kronor is the equivalent of $10.14.

Spotify Premium is generally cheaper in Asia, Africa, and South America. Cheapest of all is India, where Spotify launched in 2019. Spotify is keeping Premium at 119 rupees ($1.58) while the company attempts to conquer the market. This is more than 80% cheaper than Spotify Premium in the States – a considerable difference compared to Netflix, for which a top tier subscription in India is just 50% cheaper than in the States. 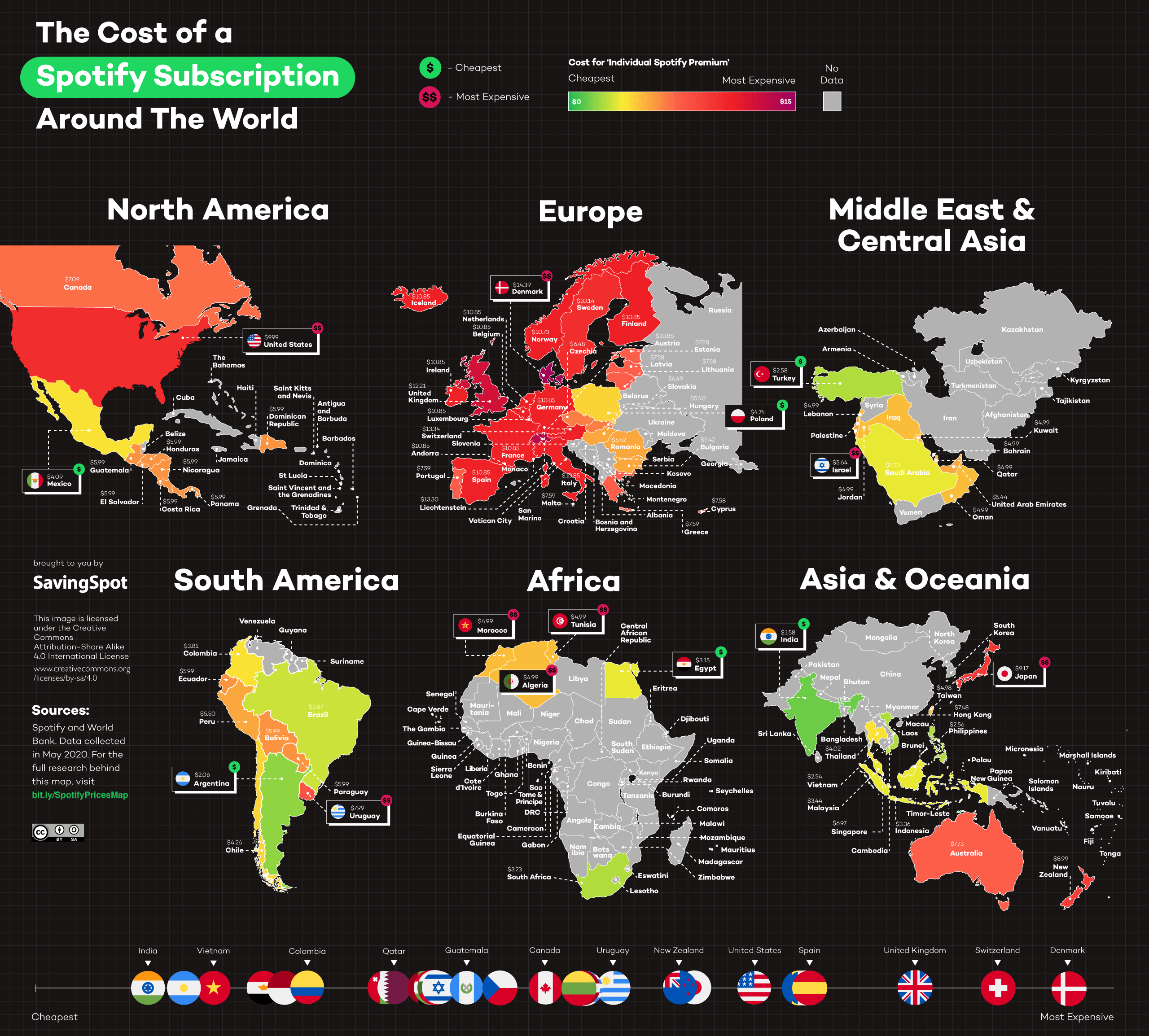 Canada and the US come out on top of North America for good value Spotify. In both cases, you’d need to spend 0.23% of the national average paycheck to get Premium for a month. Spotify costs ten local bucks in both territories, but Can$9.99 works out at just US$7.09. Canada’s lower average wage evens things out.

Central America is one of the most expensive sub-regions for Spotify. Central American countries all pay just $5.99 for Spotify, but most workers take home less than $1,000 on average. Hondurans and Nicaraguans who earn the average national wage need to spend more than $3 out of every $100 they earn to get a subscription. 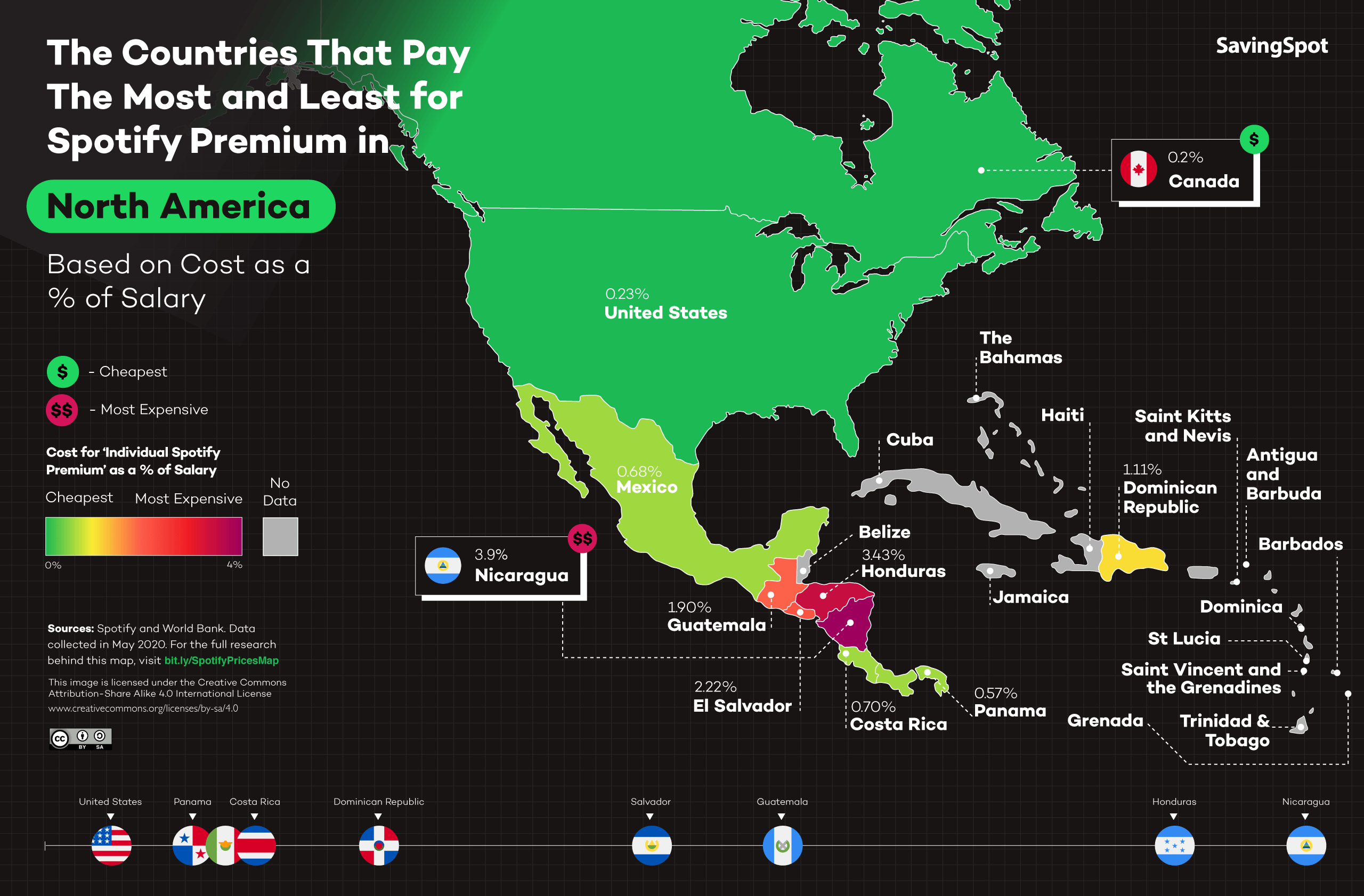 Europeans get good value for their Spotify deal, with no average earner spending more than 1% of their monthly wage for the service. Things are toughest to the east, where Latvia, Romania, Lithuania, and Bulgaria all have an average paycheck of around $1000 or less, but still pay a mid-range subscription fee.

Spotify was born in Scandinavia, but the locals don’t get any special treatment. The service costs more than $10 in Sweden, Norway, and Finland. In Denmark, it’s $14.39 – the most expensive Spotify in the world. However, with average national wages ranging from $3,150 to $5,155, most Scandinavians won’t notice their monthly Spotify payment. 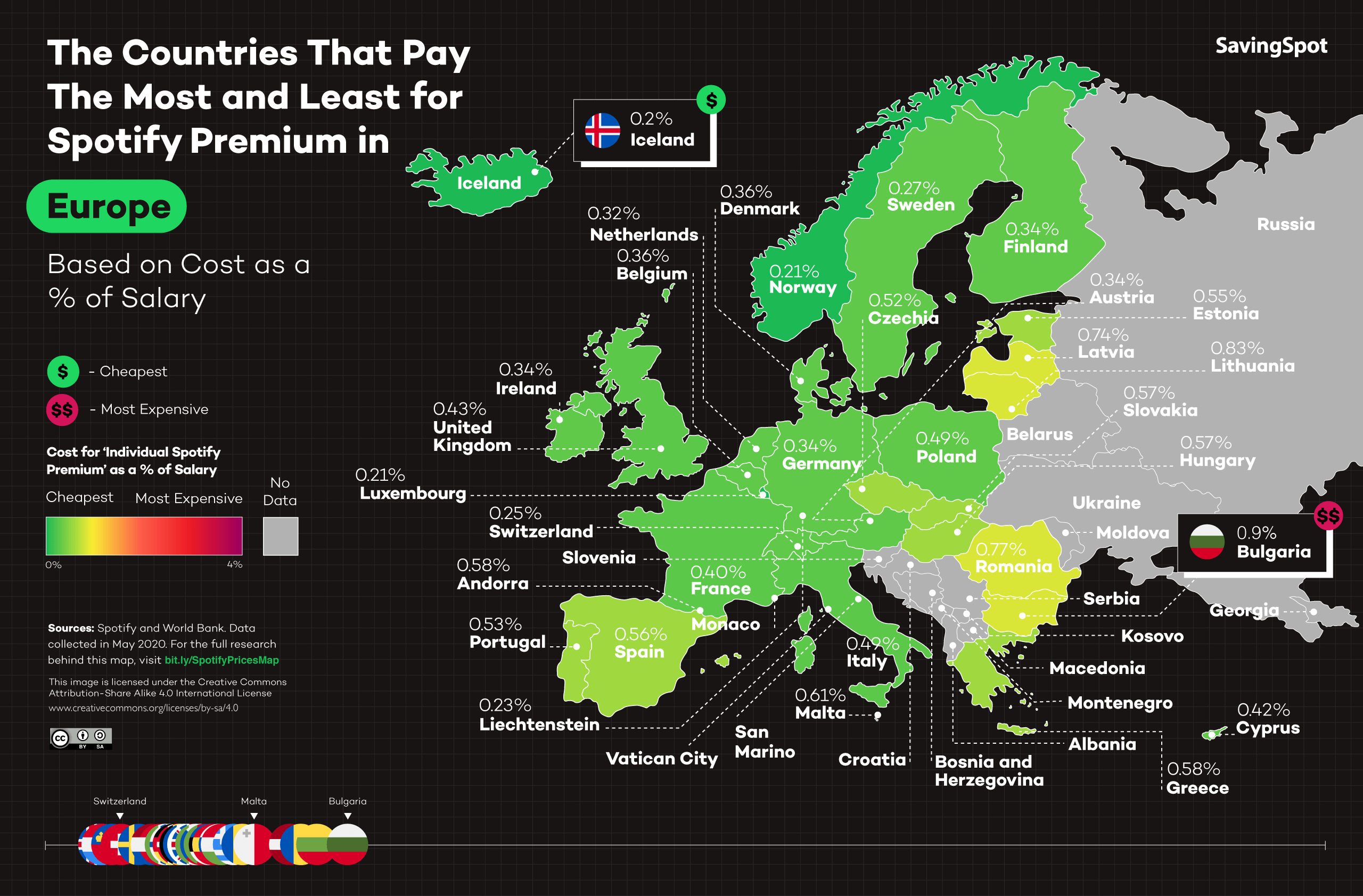 Argentines have the second-highest national average wage in South America ($1,030.49/month). Thanks to their super-cheap $2.06 Premium price-tag, they also get the continent’s best value Spotify: 0.2% of the monthly salary.

Bolivia is the South American Spotify region with the lowest national average wage ($219.21). Despite this, the country has a mid-range $5.99 subscription deal. The average Bolivian must spend 2.73% of their monthly paycheck to get Spotify Premium, which works out to be the worst value in South America. 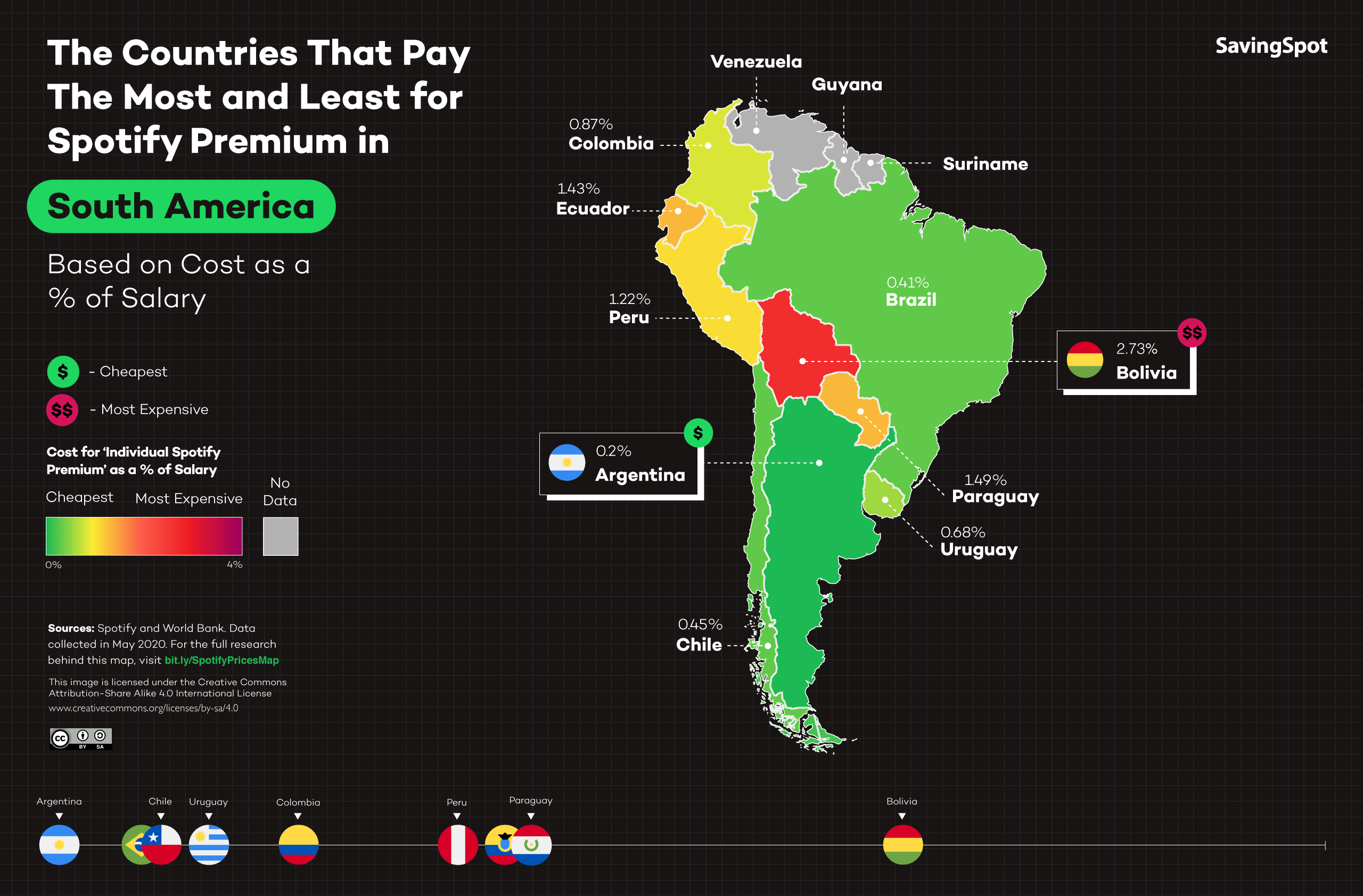 Our study found that every country in this region has a mid-range subscription cost, from $4.99 to $5.64. The exception is Turkey, where an average paycheck of $721 justifies the super-cheap $2.58 Spotify subscription.

Qatar has the best value Spotify deal in the world, relative to income. The average monthly wage is $3,994.42, but the monthly Spotify payment is just $4.99, or 0.12% of a Qatari’s paycheck. UAE and Israel aren’t far behind, each with a c.$3,000 paycheck and five-buck Spotify deal. 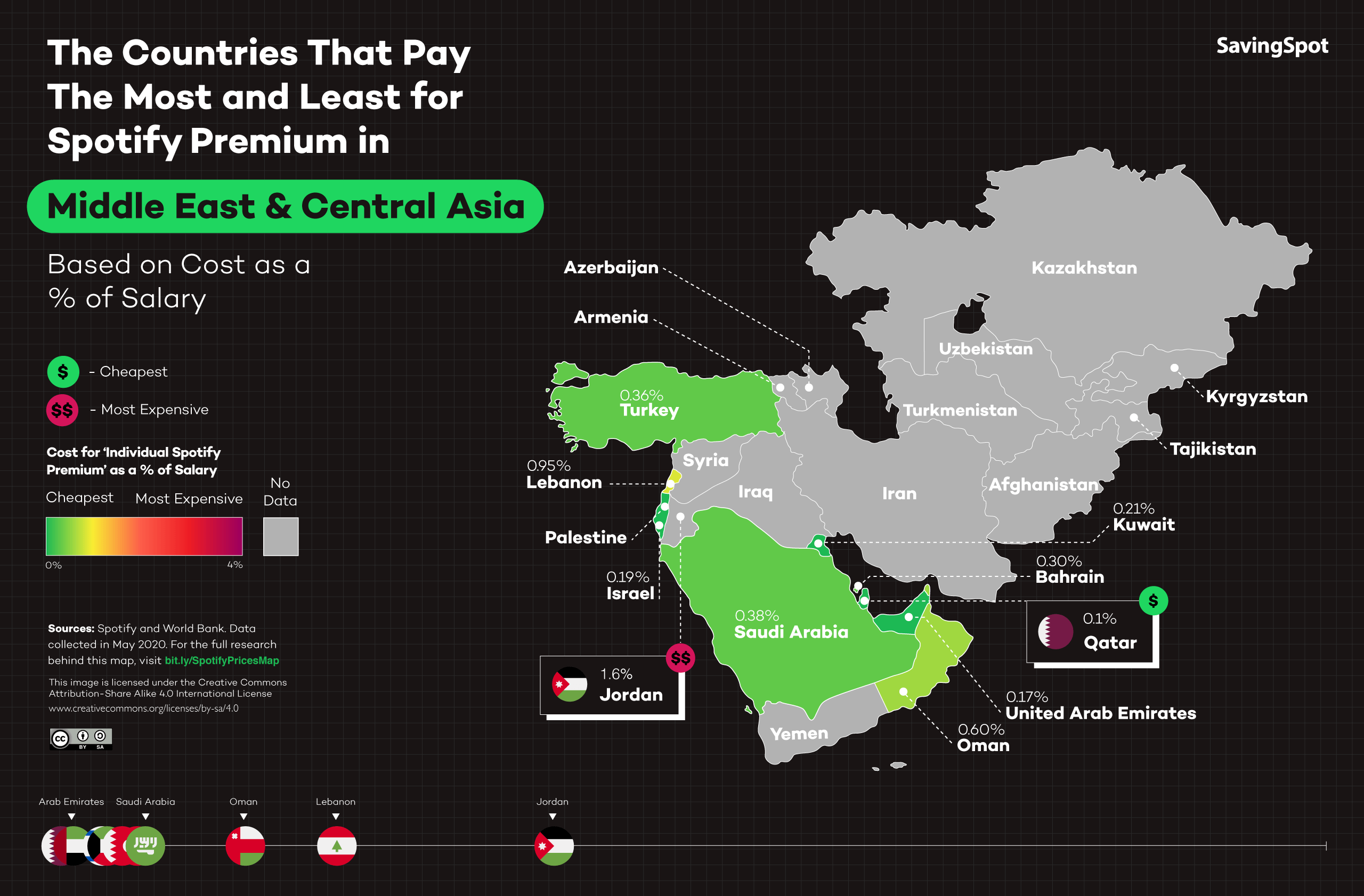 The Rest of Asia & Oceania

With the average monthly paycheck touching $4k and a decently-priced $6.97 subscription fee, Singapore has the best Spotify deal in this region. Australia and New Zealand don’t do badly either. New Zealanders earn less than Australians ($2,914 vs. $3,457) and pay more ($8.99 vs. $7.73). Still, as a percentage of their paycheck, New Zealanders pay just 0.31% for Spotify.

Vietnam has the worst deal in the region. Locals earn $162.39/month on average, and Spotify costs $2.54 (1.56% of a Vietnamese paycheck). The average Indian earns less but gets a better deal on streaming thanks to the lowest Spotify rates in the world. 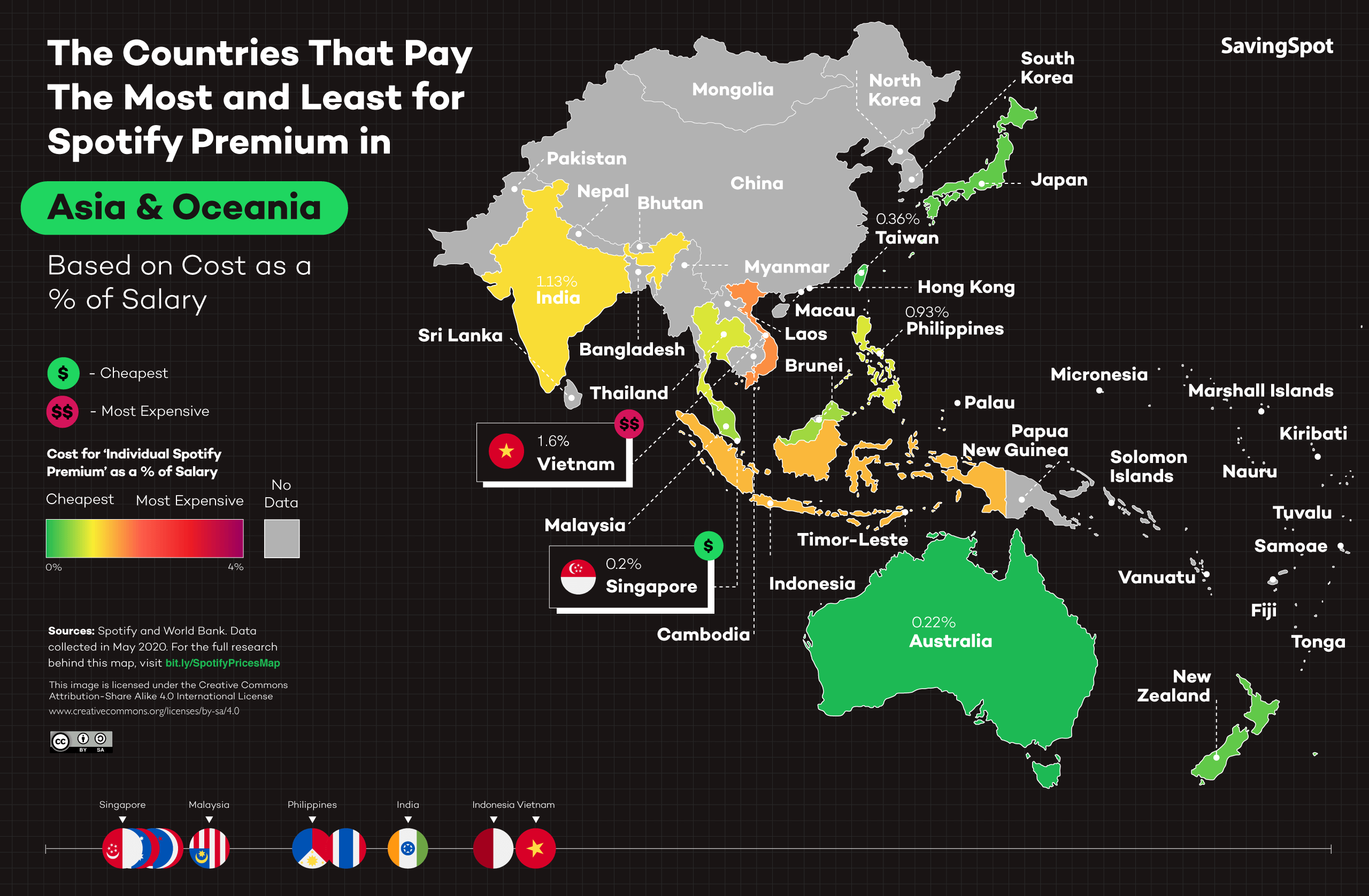 Spotify is available in only five African countries, and a Chinese-owned service called Boomplay has overtaken it to become known as the “African Spotify.” Boomplay has over 64 million users across most of the continent. Local platforms such as Musictime, WAW Muzik, and Playfre offer a significant alternative music streaming service to the big players.

African wages are among the lowest in the world, but Tunisia and Morocco still have mid-range Spotify fees of $4.99. This means the average worker must pay more than two bucks out of every hundred earned to use the Premium service. South Africa gets the best deal, with a wage of $412 against a $3.23 Spotify subscription (0.78% of the average paycheck.) 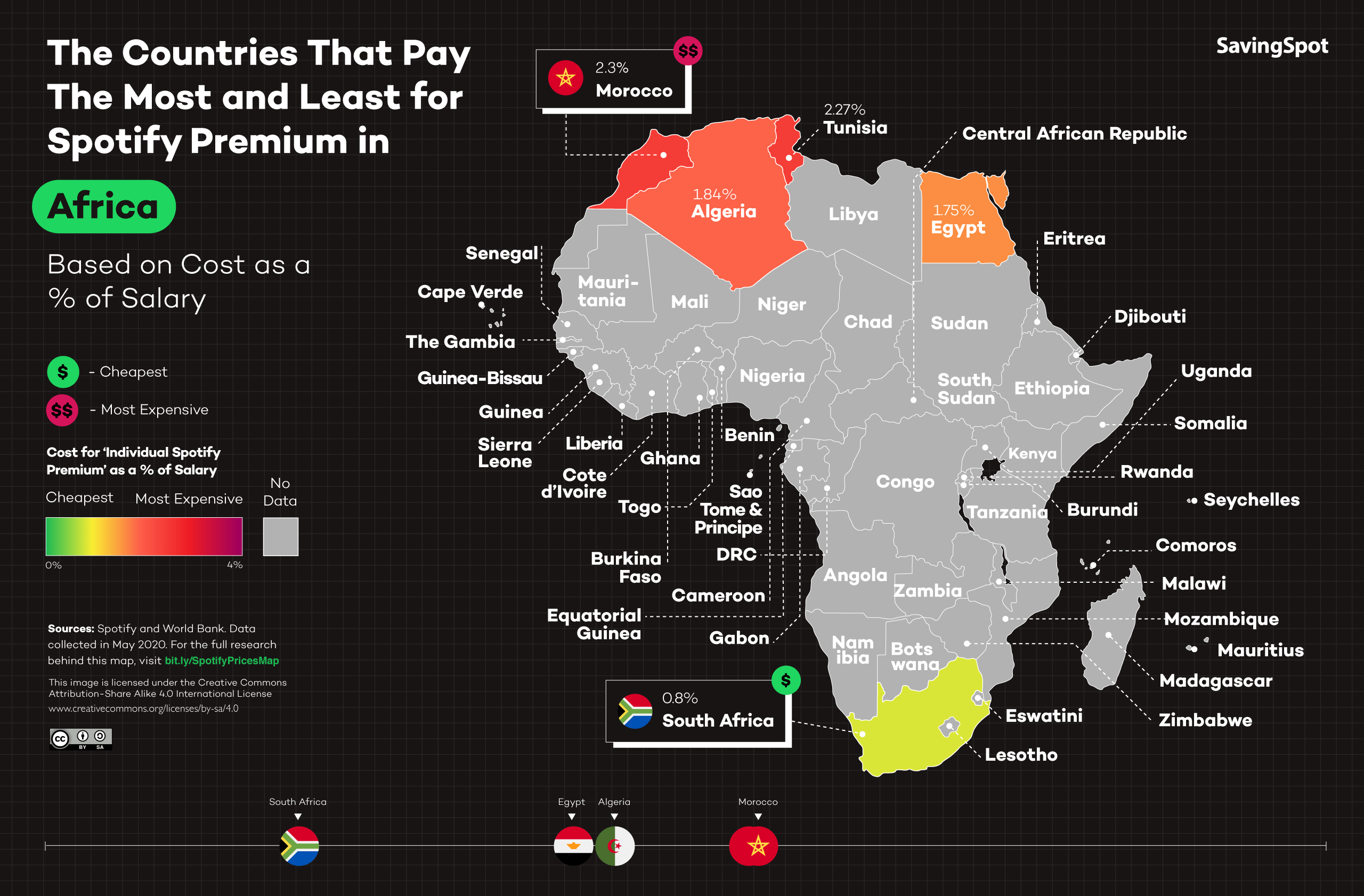 The price of Spotify around the world relative to wages differs greatly. In poorer countries with higher subscription costs, you’d need to spend the same on Spotify as you do on clothing. In richer countries, the annual Spotify bill is the same as the average spend on pastries.

But your choice of streaming service isn’t just about cost. Do you want to support the artists? Would you prefer better audio quality or a stronger range of classical music? When you think of music streaming, you may think of Spotify – but just like expanding your music taste, sometimes you’ll get the best value when you dig a bit deeper.

To make these visualizations, we used World Bank’s “Adjusted net national income per capita” data series, which indicates the typical average income of a person resident in a given country. We divided these by 12 to estimate the average monthly income. Next, we used Spotify’s Country pages to identify which countries have access to a Spotify subscription. We recorded the prices for Individual, Family, Duo, and Student subscriptions where each was available. Prices were recorded in May 2020.

All prices and wages have been converted to the equivalent in US dollars unless otherwise stated. Prices were converted using the exchange rate available through xe.com’s Currency Converter. For the full research behind this map, visit bit.ly/SpotifyPricesMap.