Home » The Top-Rated Fast-Food Chains in Every U.S. State and City 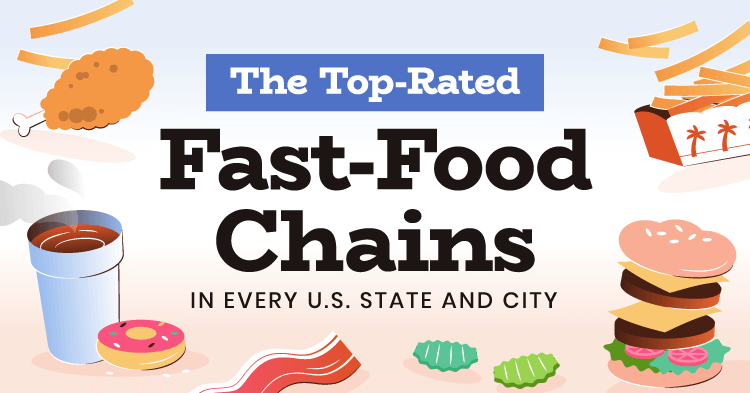 The Top-Rated Fast-Food Chains in Every U.S. State and City

Fast food is America’s national dish. Around 37% of U.S. adults eat fast food on any given day. Cheap, swift and tasty, with no cooking or dishes, fast food is a near-perfect fit for a culture of productivity, quick fixes and economic challenges.

Indeed, one USDA study found that Americans buy fast food because (wait for it…) they’re short on time. Americans are encouraged to work all hours, and the more adult members of your family are employed, the more likely you are to eat fast food. It’s a solution that also works for cash- and time-strapped parents who buy fast food for their kids because it strikes the perfect sweet spot of convenience and affordability.

Of course, parents also give kids fast food because kids find it delicious. And let’s face it, so do grown-ups. Whether it’s a perfectly honed formula for a quick, healthy meal or a guilty pleasure with inverse nutritional value, fast food feels good.

However, if fast food is an American phenomenon, preferences vary from city to city and state to state. CashNetUSA was curious how tastes differ around the country, so we headed to Google Maps to see how customers are reviewing them.

We identified the best-known fast-food chains for burgers, pizza, doughnuts, chicken and Mexican food. Then we located the branches of these in every state and the 50 most populous cities and analyzed the ratings they have on Google Maps. We created a weighted averaging system to calculate the top- and bottom-rated fast-food chains in each region.

Chick-fil-A has the top average rating in 34 American states, more than any other fast-food chain. The chicken joint regularly claims first place on the American Customer Satisfaction Index (ACSI®) Restaurant Study, thanks to the quality of its meat and famous sauce. Although it could be the rush of oxytocin customers get when their thank-yous are greeted with a heartfelt, “my pleasure.” 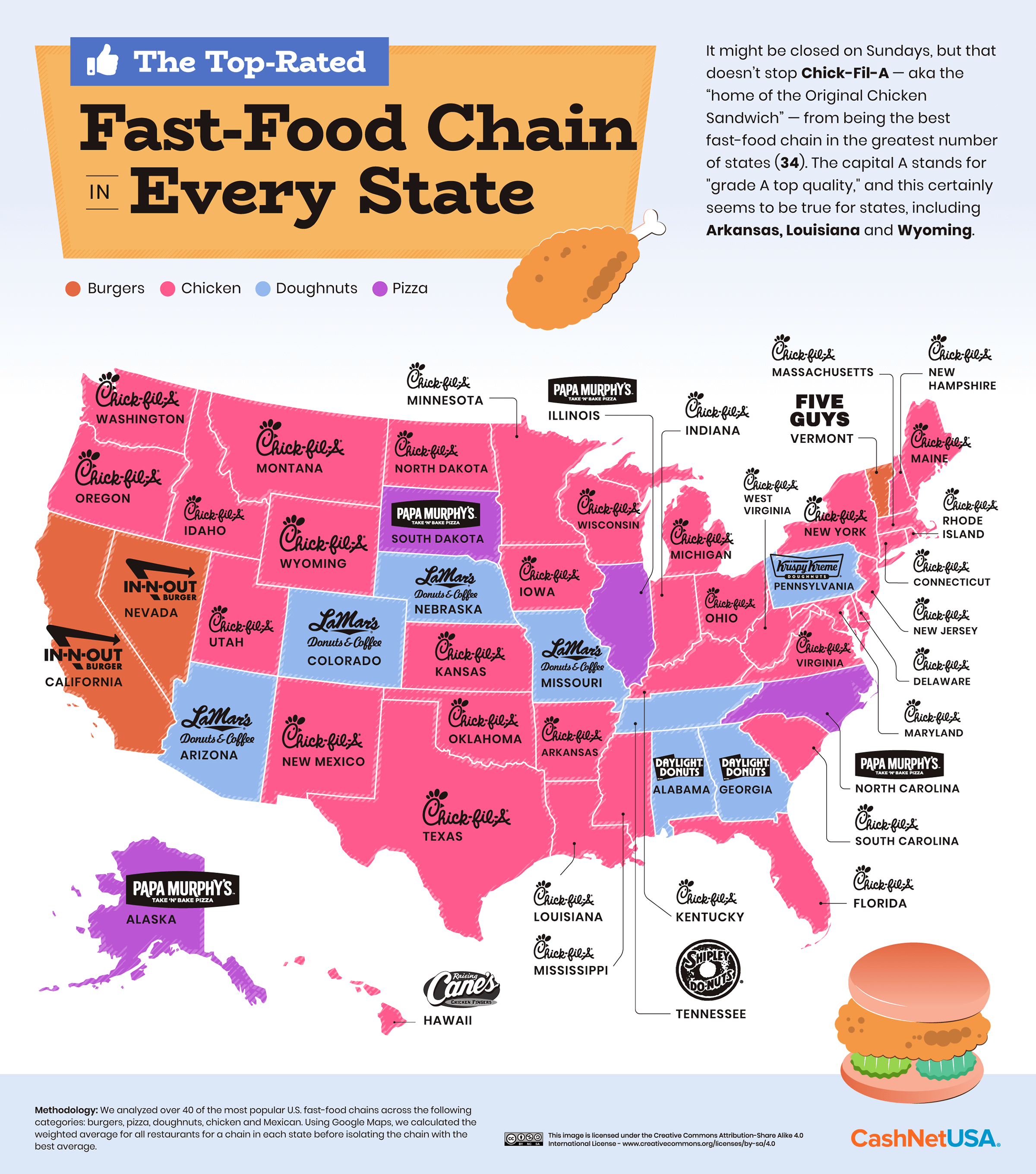 LaMar’s Donuts and Coffee and Papa Murphy’s deserve special mentions for topping four states each — particularly since LaMar’s is only operational in five states. Perhaps when it expands, LaMar’s will become America’s favorite doughnut joint. At the moment, that honor goes to Krispy Kreme, which is the top-rated doughnut joint in 17 states — as revealed in the category-by-category breakdown in the interactive below.

These maps reveal that Five Guys is the top-rated burger chain in the U.S. Five Guys dominates its category in 29 states, a feat only beaten by Chick-fil-A, which is the top chicken joint in 46 states. McDonald’s and Burger King may have more stores and more history, but Five Guys — founded in 1986 — has a quarter of a million possible burger customizations, giving customers a good shot of getting exactly what they need.

America’s pizza restaurants have a problem. The worst-rated fast-food brand in 35 states is a pizza joint, with the spoils shared between Papa John’s (16), Domino’s (14), Pizza Hut (4) and Little Caesars (1). The latter is known for its cheapness, but customers are unlikely to give a high rating for low cost if their taste buds are left wanting for better ingredients. And Papa John’s? Folks feel disinclined to cut the chain’s outdated customer service any slack since Papa John said some awful stuff. 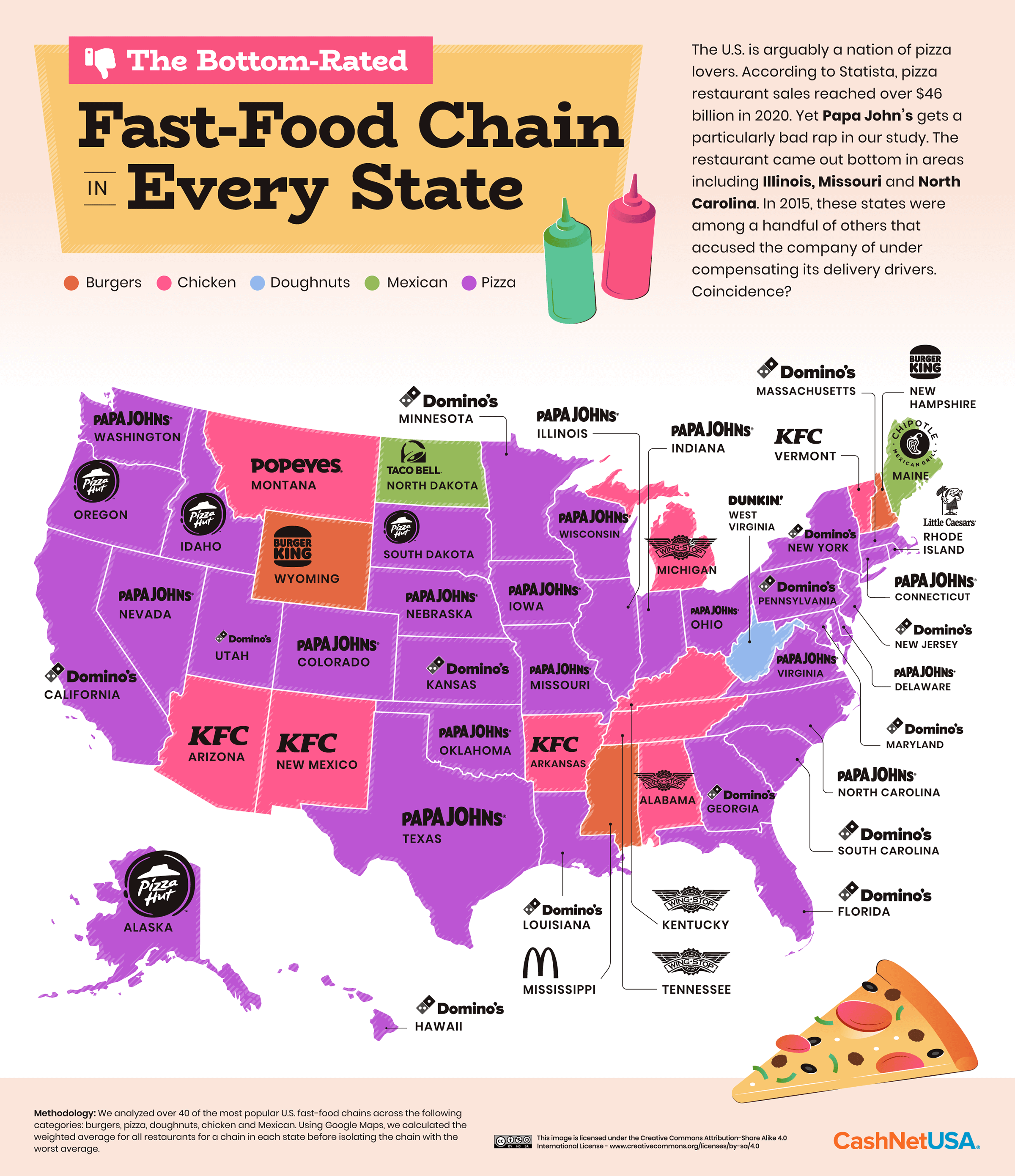 Burger King is the lowest-rated fast-food brand in two states and McDonald’s in another one. The pair are each considered the worst burger chain in 24 states, as revealed in our category-by-category maps below.

Dunkin’ Donuts takes the cake as the lowest-rated doughnut joint in 31 states, which is more than any other brand in its own category. Dunkin’, which flopped in India having failed to notice that Indians don’t eat doughnuts for breakfast, has offered unparalleled innovation in the doughnut form in the U.S. — but has failed to leave behind the stigma of artificial and unhealthy ingredients as American tastes have evolved.

KFC Losing Out to Giants and Minnows in Chicken Wars

Chick-fil-A is the top dog in 27 of America’s 50 most populated cities, echoing the results at the state level. In-N-Out Burger takes second place with 12 cities. Nine of these cities are in the brand’s home state of California. Indeed, In-N-Out Burger only operates in seven states and does not yet offer franchising out of concern for impacting quality. 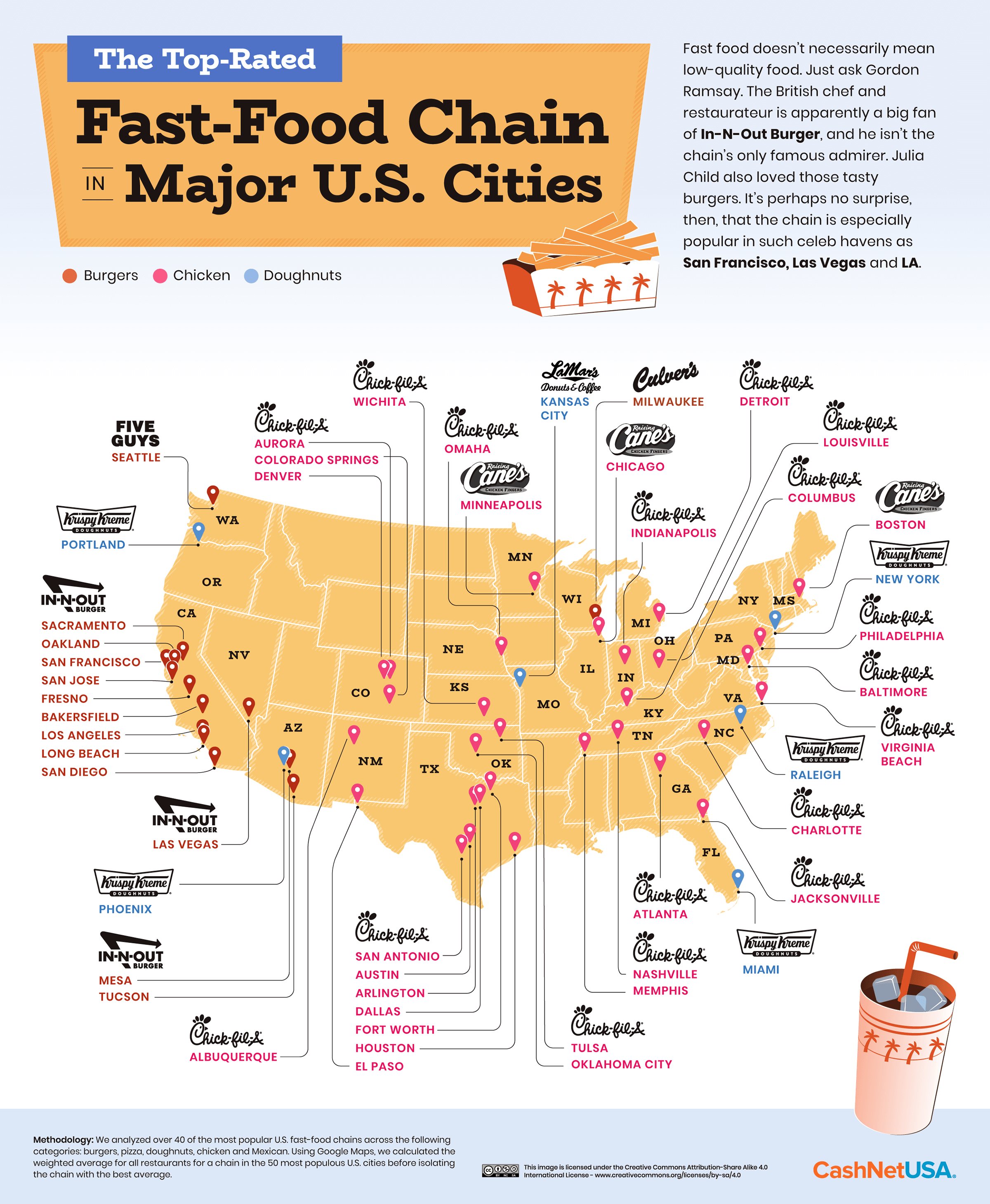 Chicken joint Raising Cane’s is giving Chick-fil-A a run for its money, out-ranking the champ in Boston, Chicago and Minneapolis. KFC does not fare so well: as demonstrated in the map below, it is the lowest-rated fast-food chain in five cities. From fake rumors of mutant chickens to vegetarian chicken that doesn’t cut the mustard (according to chicken industry representatives, anyway), KFC has long been a magnet for bad publicity that sticks. 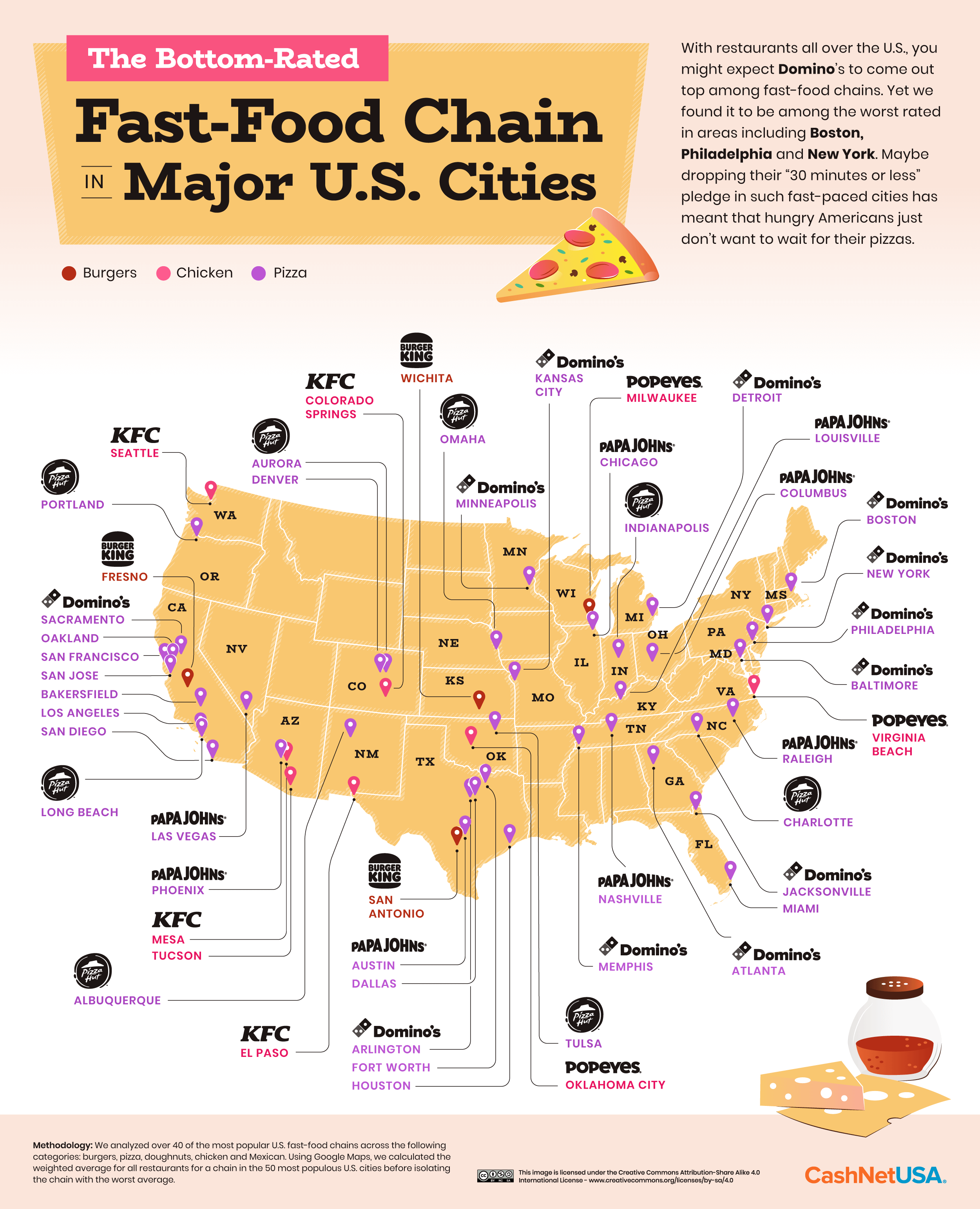 But despite KFC’s poor showing, the lowest-rated fast-food joints are mostly pizza places. Domino’s is the lowest-rated fast-food chain in 21 cities, with Papa John’s and Pizza Hut the worst in nine cities each. Of course, one issue is that each brand has its distinct take and specialties, which can leave customers wanting if they find themselves at an alternative to their usual. Pizza from your second-favorite pizza chain just doesn’t taste right at all, right?

Curious where to find the best Chipotle, Chuck E. Cheese, or Church’s Chicken in the States? We delved into our data to identify the top- and bottom-rated restaurant for each chain. The highest fast-food joint in our study is a Chick-fil-A on Rangeline Rd. in Joplin, MO, with an average Google Maps rating of 4.77 when our data was collected. “The best service I’ve ever experienced!” raves one reviewer.

The worst-rated fast-food joint in the U.S. is a Domino’s on Jerome Ave. in the Bronx (average 2.01). According to some reviewers, the pizza is cold, soggy and poorly presented. And it takes so long to arrive!

When you’re pressed for time, it’s tough to make the call between a quick, satisfying meal and something more meaningful and healthy. But setting aside a couple of hours each week to prep healthy meals for the days ahead can help you save time, watch the pennies and develop a love affair with the valuable ingredients that underlie the healthiest recipes. Why not try some of these solutions when you’re in a fix?

We analyzed fast-food chain restaurants located in the U.S. from the following five cuisines/categories:

We collected the number of star reviews and total reviews for each chain restaurant from Google Maps. For individual branches, we sourced direct links to Google Maps from the restaurants’ websites. When such links weren’t available, we searched Google Maps for the name and address of each branch. Addresses for some branches were already provided, and we searched for these using the above method.