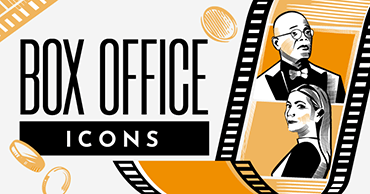 The Highest-Grossing Actor Born in Every Country and US State

Cinema’s big names are called stars because they bridge the gap between the human and the heavenly — glowing all the while. But that’s not where the metaphor ends. Acting’s brightest lights guide ticket-buying audiences to movies that they might otherwise miss. And they command astronomical fees for doing so — because their names can attract astronomical box office sales.

The presence of a star brands a film. Audiences don’t just flock to it because they love that particular star, but because “that new comedy with Jennifer Aniston” communicates a sense of the film more than just “that new comedy” (Okay, so with Jennifer Aniston, it’s complicated). Just like buying any new product from a brand you know, that $9 ticket feels like less of a gamble.

But there’s also good old human interest. One study found that adding an A-list name to an existing cast of A-listers disproportionately boosts the expected takings of the film. Audiences pay not just for a big name but for the chemistry between big names.

So, which actors boost ticket sales the most?

We used the IMDb filmographies of nearly half a million actors to calculate the total box office sales of their movies adjusted for inflation. Then, we gathered their birthplace to help us uncover every country’s top-grossing actors. Digging deeper into the data, we were also able to reveal the top-grossing actors born in every US state.

We made sure our study highlights both combined and female-only results because women are still underrepresented in cinema. Did you know only 31% of the top 100 Hollywood films of 2021 had a female protagonist? This was the case even though female-led films are just as profitable.

Warwick Davis and Cate Blanchett Among World’s Most Bankable Stars

“I was growing up in segregation, so I didn’t expect to go to the movies and see Black people up on the screen,” says the world’s most stellar actor, Samuel L. Jackson. His breakthrough roles came in the early ‘90s, and by 2002 Marvel’s Mark Millar was secretly basing his drawings of a new character on the actor’s looks. Jackson was a shoo-in for the eventual movie role, becoming a linchpin of the MCU. Now, Jackson says: “I could be the Alec Guinness of Marvel movies.” 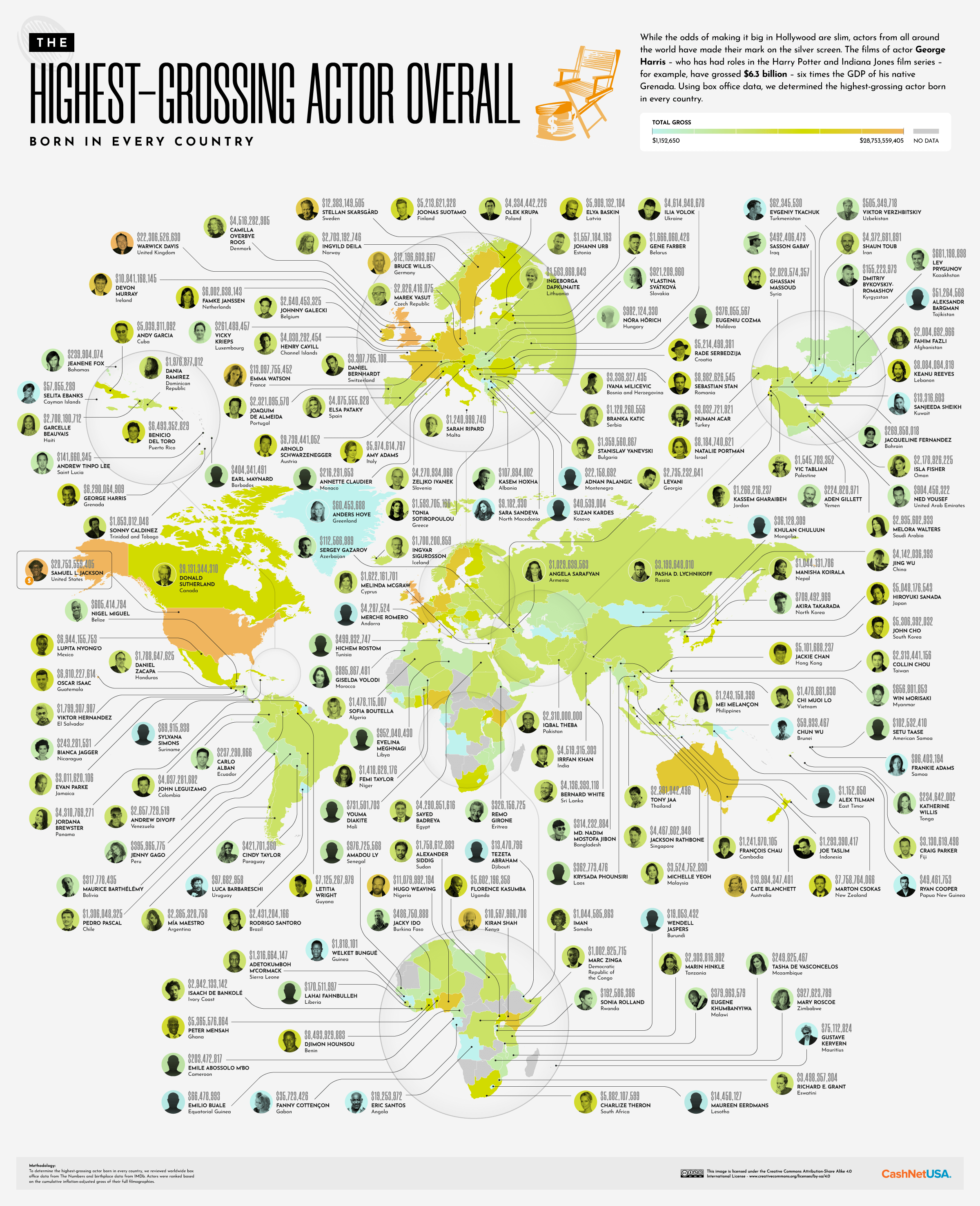 Despite the fine reputation of French cinema, the nation’s biggest grosser is best known for the US/UK-made Harry Potter films. France-born Emma Watson’s box office total currently rests at just over $13bn. Ireland’s top-grossing actor, Devon Murray, can also thank the wizarding chronicles for his place on the map. Other top figures include more or less identifiable Hollywood imports – everyone knows Arnold Schwarzenegger is Austrian, but would you have guessed that Germany’s most profitable son is Bruce Willis? 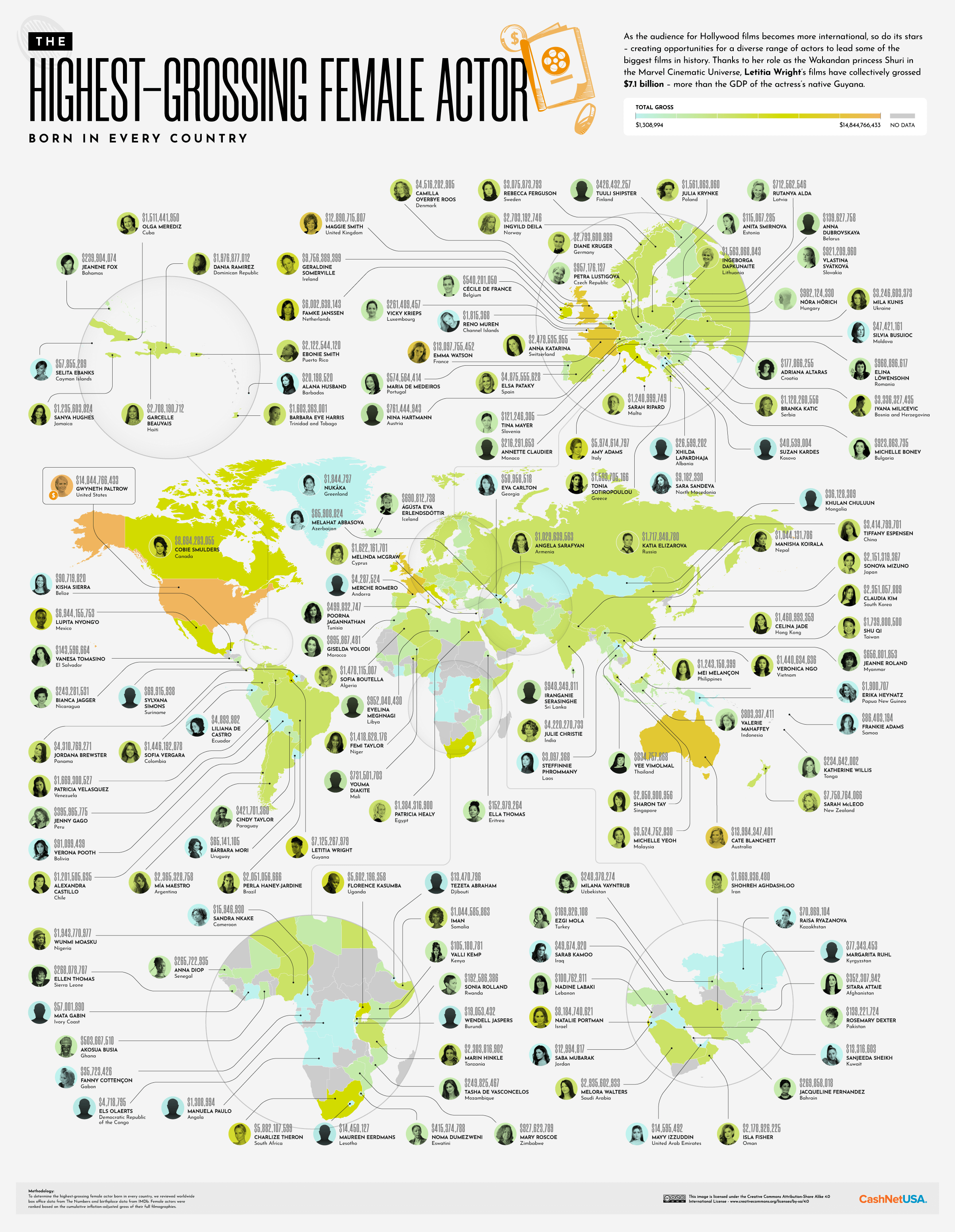 Despite the diversity among the top three actors, only two female actors make the top ten. So, we highlighted the top female actor born in each country, too. Australian Cate Blanchett remains in second place, with America’s Gwyneth Paltrow the world’s top-grossing actor among women, thanks mostly to her Marvel stint. There’s a definite ‘Marvel effect’ across our findings — Poland’s highest-grossing actress, Julia Krynke, is more familiar as a TV star in the UK, Poland and Germany, but has $1.56bn in the box office to her name thanks to an unnamed role as “Sokovian Driver” in Avengers: Age of Ultron.

These are the actors born in each state whose movies have grossed the most at the box office. It’s a curious mix of blockbuster billboard names, versatile character actors and the journeyman professionals who’ve racked up the figures with semi-anonymous bit parts. The latter may have billions of dollars in ticket sales to their name while struggling to make the average US income from one year to the next. 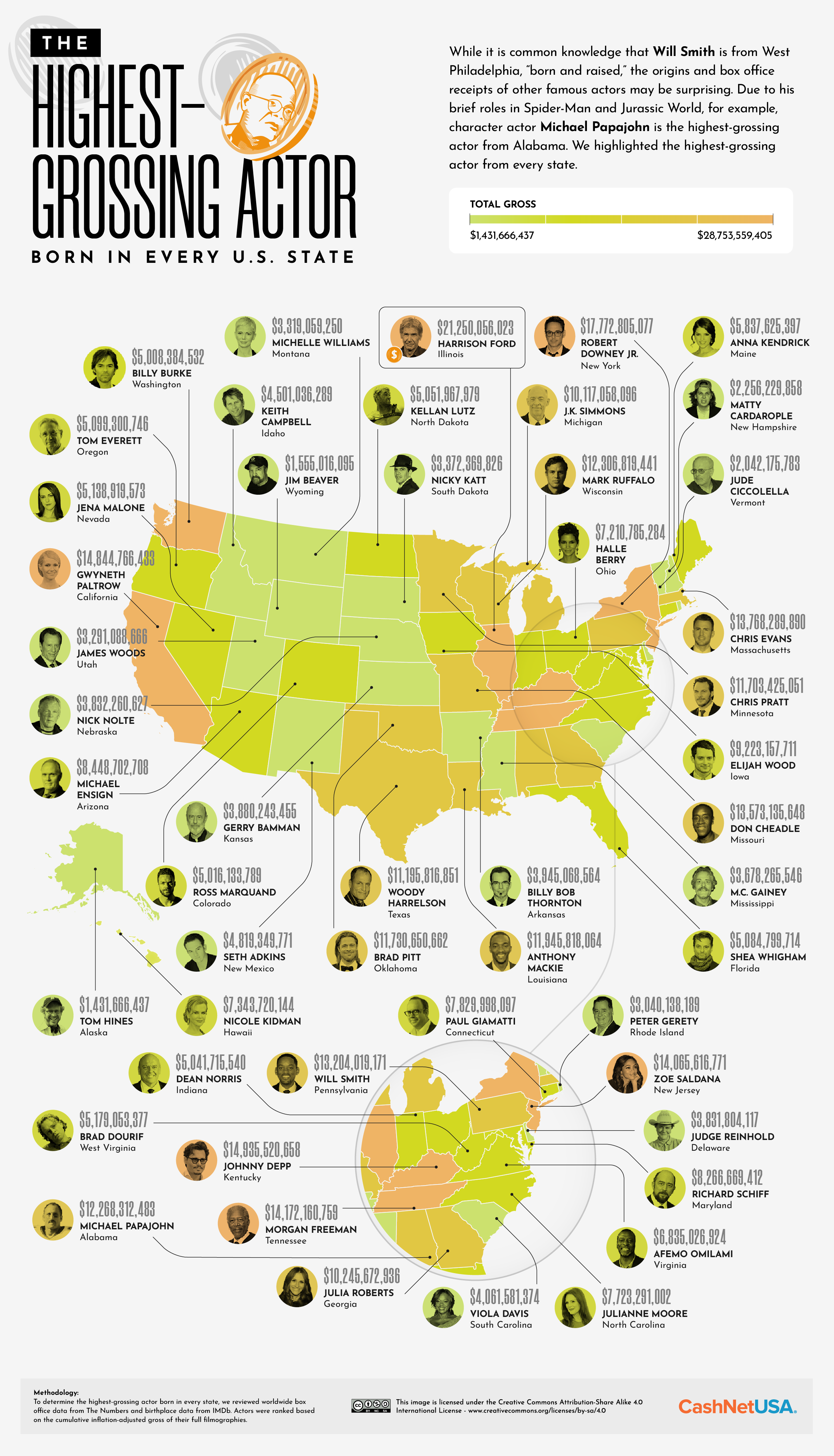 Illinois-born Harrison Ford is very much the former, whether carrying movies with his own name or pioneering the franchise movie with the Star Wars and Indiana Jones series. The Fugitive is his highest-grossing non-franchise flick, grossing $183.88m. Harrison’s career total of $21.25bn and rising puts Illinois in first place on our map. (Samuel L. Jackson doesn’t appear as he was born in Washington, D.C., which is not in a state). Meanwhile, Vermont’s most lucrative actor, Jude Ciccolella, has quietly totted up just over $2bn in the box office. Ciccolella is most familiar for his recurring TV roles but has popped up in small roles across a raft of well-performing movies over a 30-year movie career. 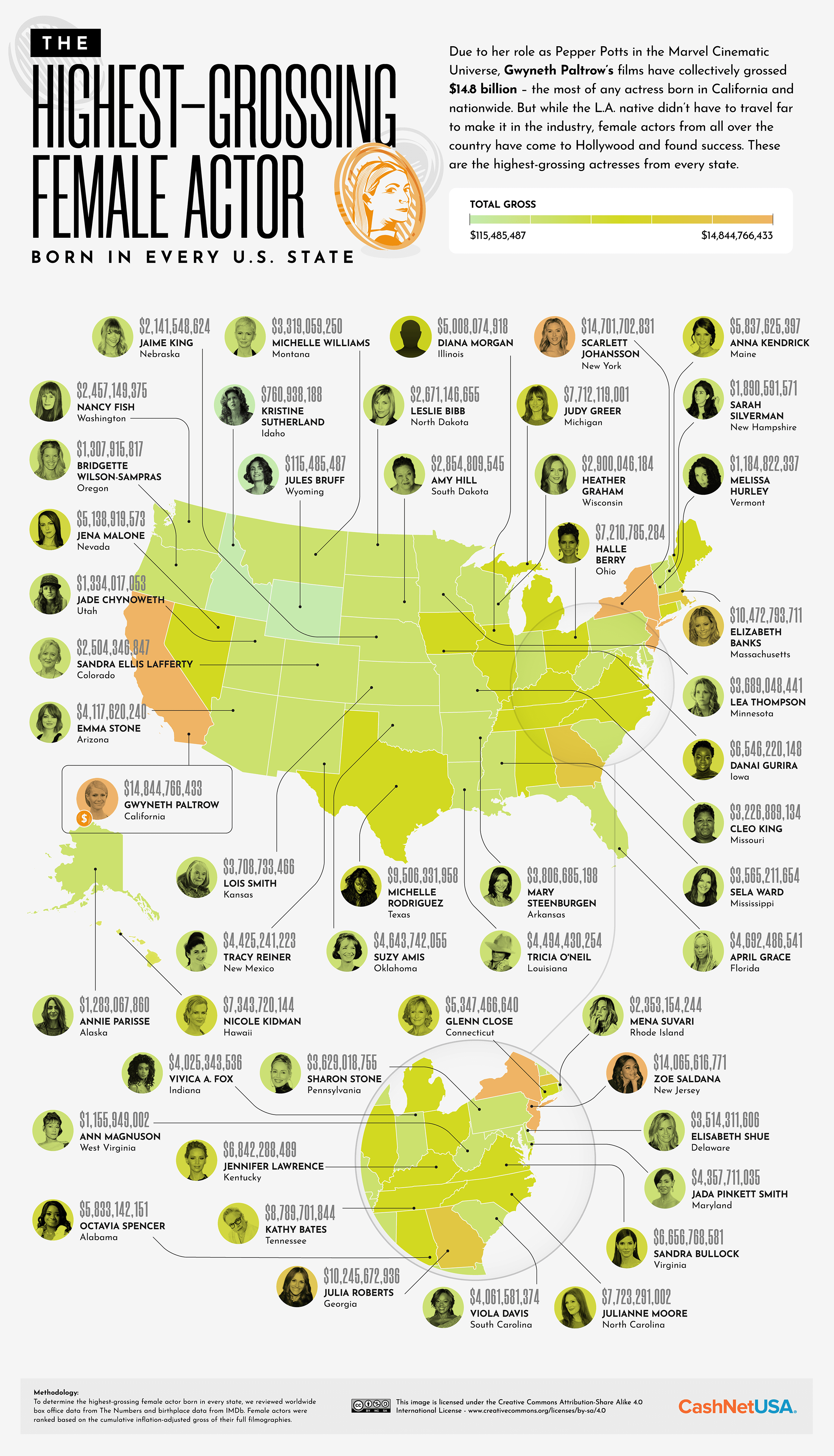 In Hollywood, top female actors earn 38% the rate of the top men (outside of cinema, the figure is more like 80%). But the top-ten female actors on this map have grossed over $105.4bn between them. New Jersey’s Zoe Saldaña has shown a particular flair for choosing a winner, having appeared in the two highest-grossing movies ever (Avatar and Avengers: Endgame) and three of the only five movies to each gross $2bn.

Thinking about making a few mil’ with some ‘fantasy league’ casting for your next big international movie? You can sort our full data in full using the interactive table below to identify the most profitable movie stars from around the world.

But beware: the power of celebrity does not guarantee big bucks at the box office. Just look at Movie 43, an ensemble movie with a list of bankable names as long as your arm and including actors such as Halle Berry and Emma Stone from our maps. The picture made less than $9m at home and $32m worldwide and only broke even because the stars came out for equity rates of just $800 for a couple of days work in return for a share of the ‘profits.’

Should they have known better? As the screenwriter William Goldman famously describes the movie business in Adventures in the Screen Trade: “nobody knows anything.”

We first collected all the information provided on IMDb, including the name, gender, filmography, and birthplace of 450,527 actors and actresses.

We combined all the films from the filmographies into one table, removing any duplicates, collecting the year of release for each movie and information about gross worldwide. Where information about gross was unavailable, we excluded the film from further calculations due to the impossibility of adequate replacement of these data. We also excluded any films from filmographies in which the actors or actresses were uncredited, as well as voice roles.

Next, we calculated the number of tickets sold for each movie based on the grosses adjusted for ticket price inflation provided by IMDb, dividing gross worldwide by the ticket price of the release year movie. We recalculated gross worldwide into prices for 2020 by multiplying the number of tickets by the price of the ticket in 2020.

We then calculated the total gross of every actor by adding up the adjusted gross worldwide of all films in their filmography. Further, based on the place of birth of the actor or actress, we determined the country of origin and, in the case of the United States, also the state. If an actor or actress’ place of birth was not mentioned, this personality was not included in the final table. Finally, we determined each country and state’s top-grossing actor and actress.

The data was collected in March 2022.