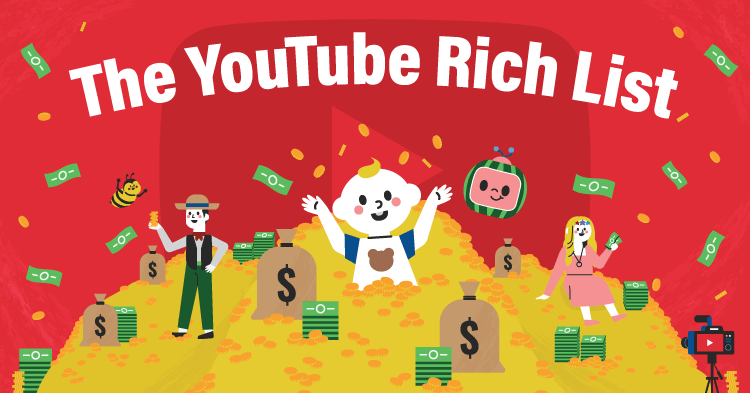 Despite the growing popularity of rival content creation platforms such as TikTok, Instagram and Twitch, YouTube is still king. It is the second-most visited website on the internet (after Google) and boasts 14.3 billion visits per month, which is more than Facebook and Wikipedia.

694,000 hours of video are streamed on the platform every minute — impressive considering Netflix users stream just 452,000 hours per minute and offer feature-length movies right at their users’ fingertips.

Since 2007, content creators have been able to earn revenue from the platform, and this has inspired a generation of content creators who have used the platform to earn a living. In 2019, a survey found that a third of kids aged between 8 and 12 aspired to be a YouTuber when they grew up.

While it might not be as lucrative as it seems, there are still nearly 400,000 Americans earning a living from the platform. To find out which YouTubers earn the most on the platform, CashNetUSA analyzed channels in every country.

Using SocialBlade’s database of YouTube channel data, we isolated the top-earning channel in every country and an estimation of the channel’s lifetime earnings. We broke down the results by region and channel type.

With more than 500 hours of content being uploaded to YouTube every minute, viewers around the world are completely spoiled for choice, with every niche being catered to. Six channels now have more than 100 million subscribers. But which have been able to earn the most? 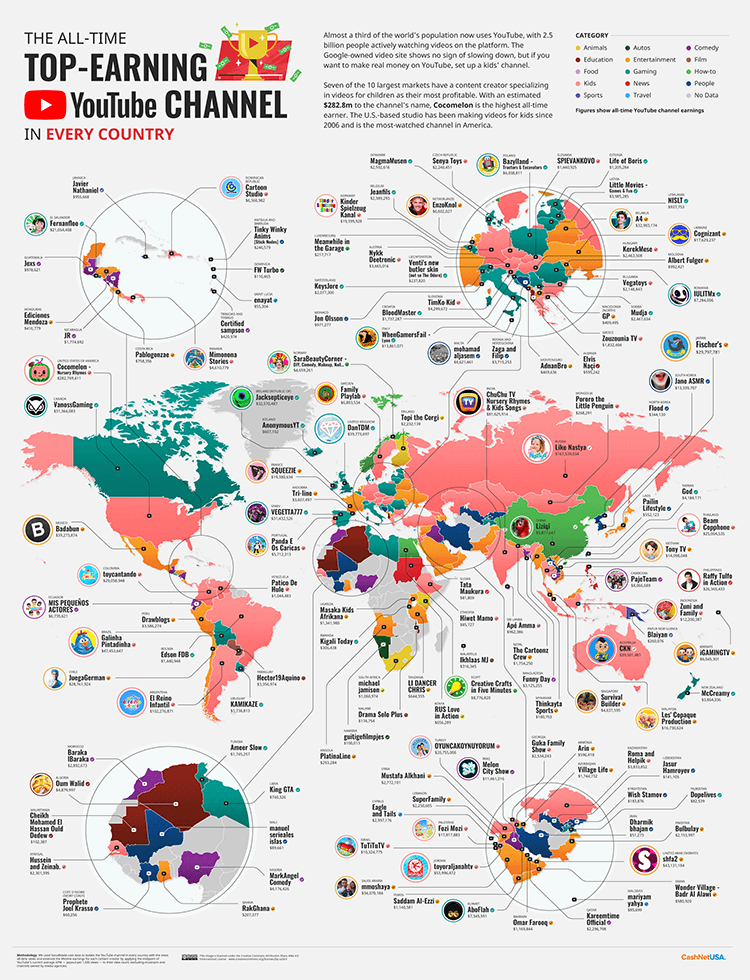 Our research shows that kids’ content is booming, with five of the six continents boasting a children’s creator as their highest all-time earner. Excluding channels run by media organizations, nobody can compete with Cocomelon’s popularity. In December 2020, they became the third channel to reach 100 million subscribers, and our research shows that the channel has made $282.8m from YouTube in its lifetime.

Nearly three-quarters (73%) of U.S. adults say that they use YouTube. There are now more than 22,000 channels with more than one million subscribers, and the platform counts for more than a quarter (27%) of mobile video traffic in North America. The continent’s appetite for video content from their favorite YouTubers shows no sign of slowing down, but which creators earn the most? 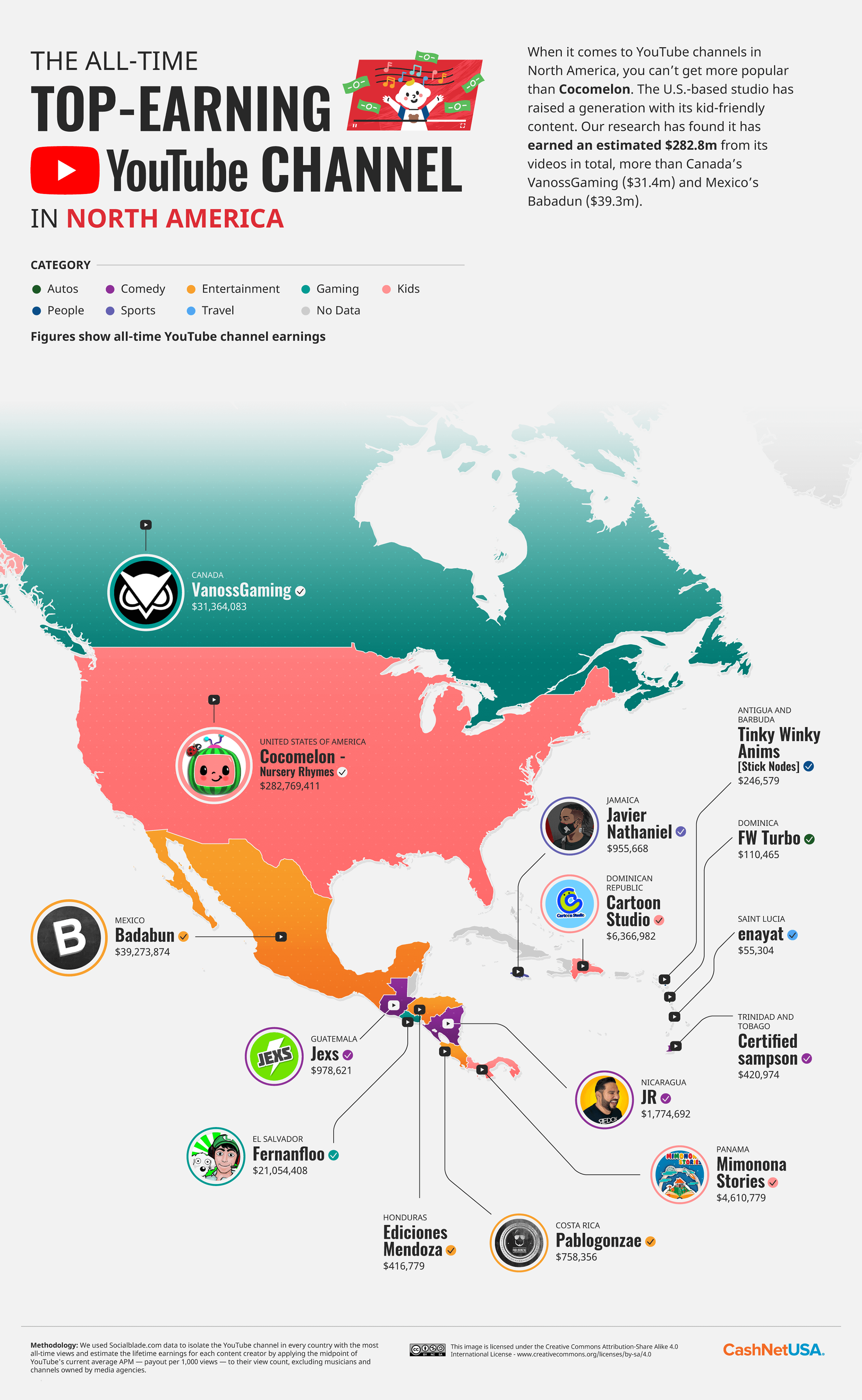 With more than 136 billion views on their videos, children’s channel Cocomelon leads the way for YouTube earnings in North America, making a total of $282.8m from the platform so far. Mexican entertainment giant Babadun ($39.3m) and Canadian gamer VanossGaming ($31.3m) have also made sizable fortunes from their channels.

Three South American countries – Brazil, Argentina and Colombia, are among YouTube’s 25 largest markets for views, with 274 billion in Brazil alone. In 2016, the music video for Colombian singer Shakira’s song Chantaje became the fastest Spanish-language video to hit 1 billion views on the platform. 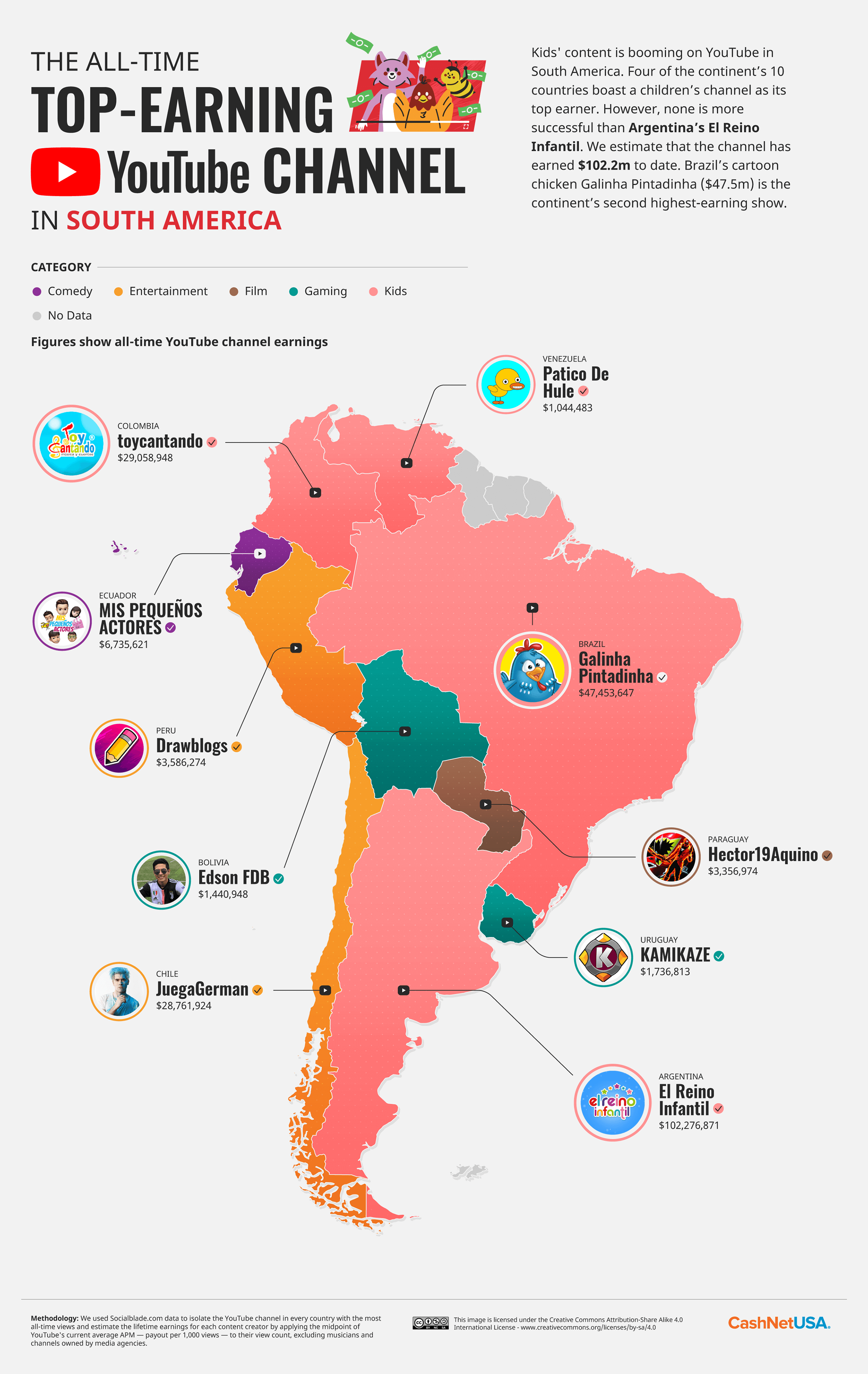 In all-time earnings, however, no channel can surpass Argentina’s El Reino Infantil. Translating to ‘the children’s kingdom’ in English, the Spanish-language kids’ video platform has become legendary for its sing-along videos — even attracting a rendition from Ashton Kutcher and Mila Kunis. Our research shows that the channel has earned $102.5m in its lifetime.

Just over a quarter (27%) of YouTube’s global viewing figures belong to European users, with the U.K., Russia and Spain among its largest markets. Our research shows that viewers here have a clear preference for gamers — 16 of the 45 countries on the continent have a highest-earning channel that specializes in video game content. The U.K.’s DanTDM ($39.8m) and Ireland’s Jacksepticeye ($32.5m) have earned the most among gaming channels. 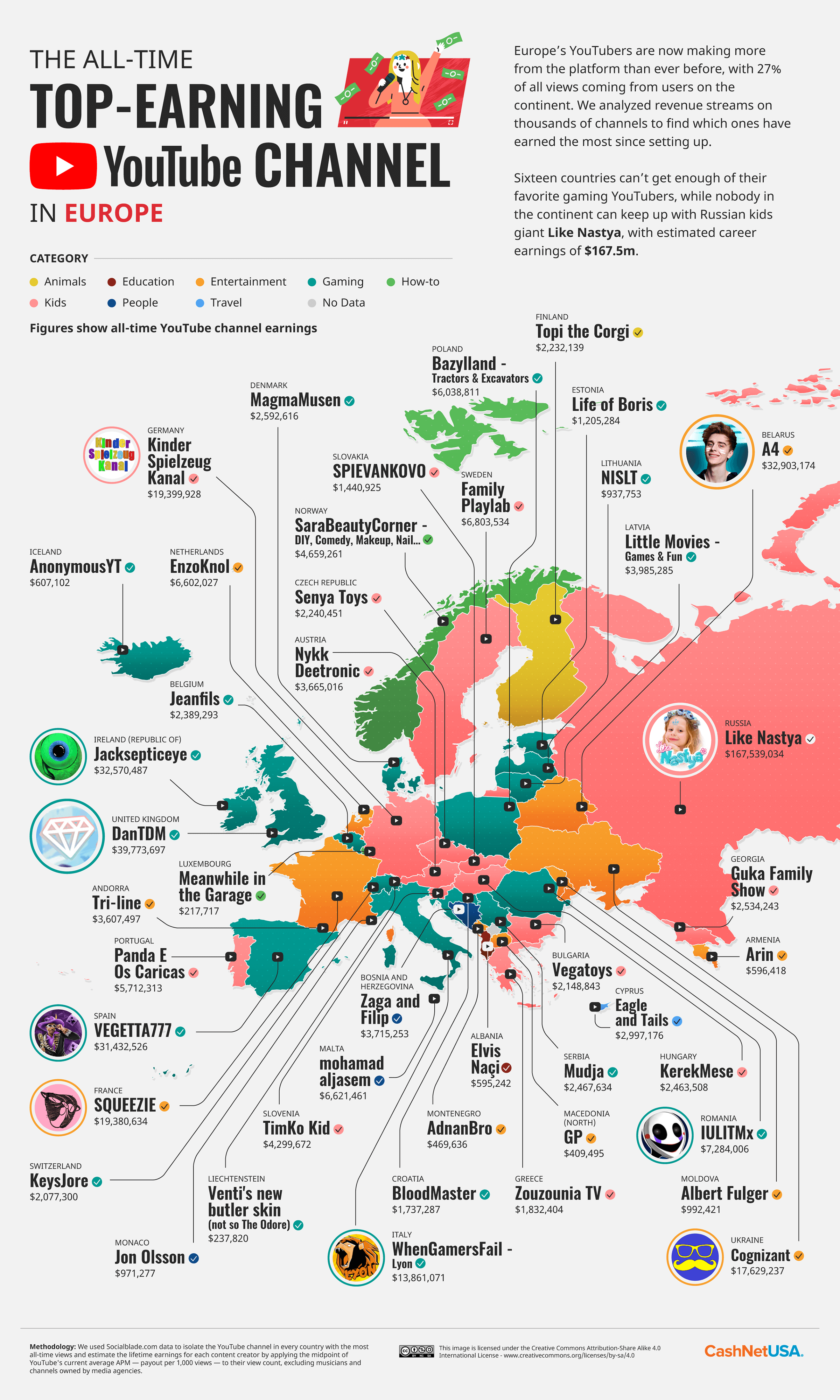 However, nobody in Europe has earned more than Russia’s Like Nastya. With more than 82 billion views, their kid-friendly content has brought home $167.5m since the channel was created in December 2016. It belongs to Anastasia Radzinskaya, a young girl from Krasnodar in southern Russia. She was diagnosed with cerebral palsy at a young age and moved with her parents to the United States, where the channel became among the fastest-growing on the platform.

The number of YouTube channels in the Middle East grew by 160% between 2015 and 2018, with more than 200 channels in the region surpassing one million subscribers. According to Tubular Labs, Saudi Arabia has the highest per-capita watch time of any country in the world and has seen an influx of female content creators thrive on the platform. 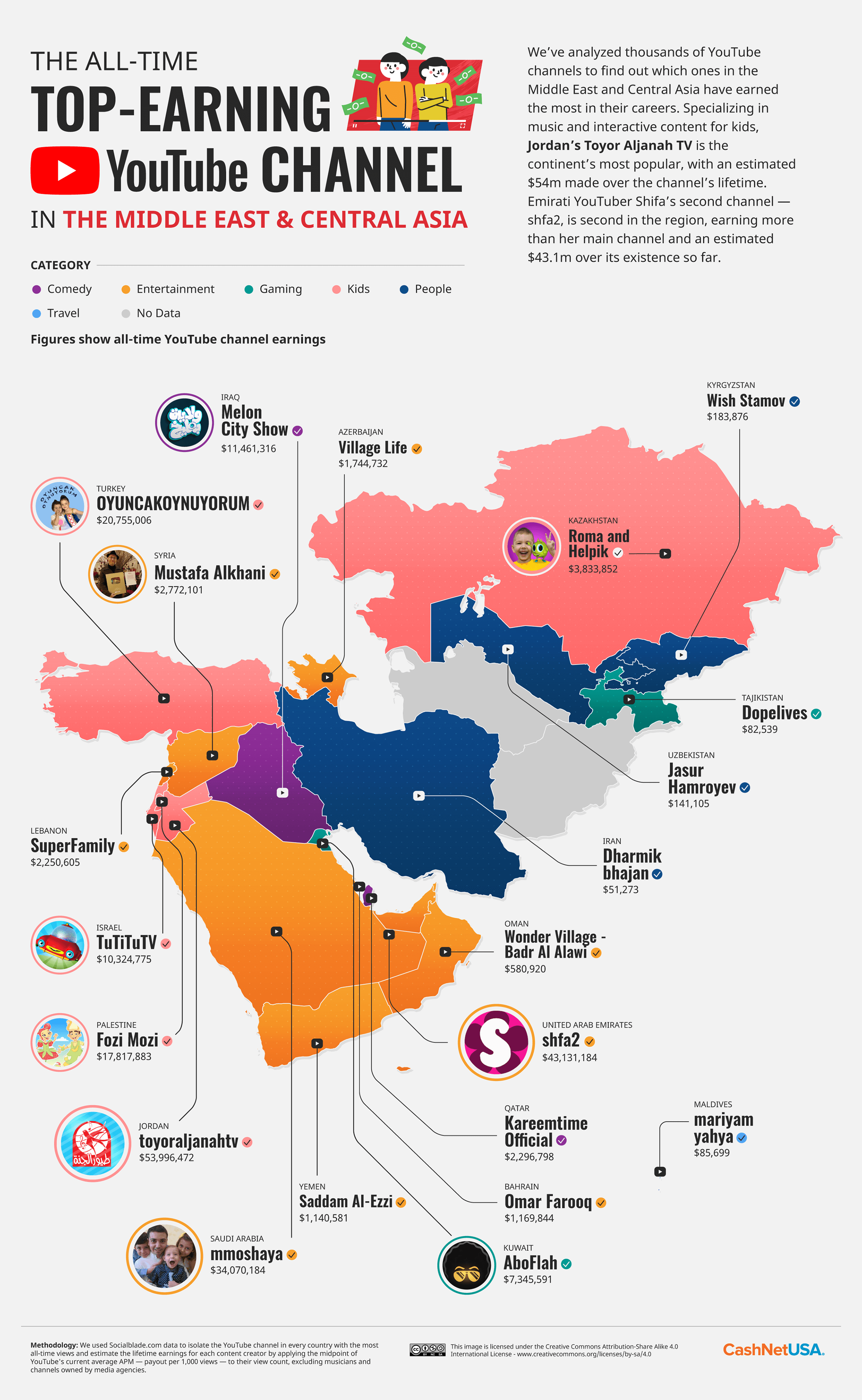 When it comes to all-time earnings, Jordanian kids’ platform Toyor Al-Jannah (toyoraljanahtv) surpasses every other channel in the region. Launched in 2008, it was among the first entertainment networks in the Middle East dedicated to children’s videos on YouTube. Our research shows it has earned $54m since then, more than Emirati and Saudi vloggers Shifa (aka shfa2) and Mohammed Moshaya Al-Ghamdi (aka mmoshaya), who earned $43m and $34m, respectively.

The YouTube story over the last decade has been dominated by growth in the Asia-Pacific region, from PewDiePie’s rivalry with Bollywood channel T-Series to the rise of K-Pop powerhouses BTS and Blackpink. Half of the 20 most subscribed YouTube channels are based in India or South Korea. 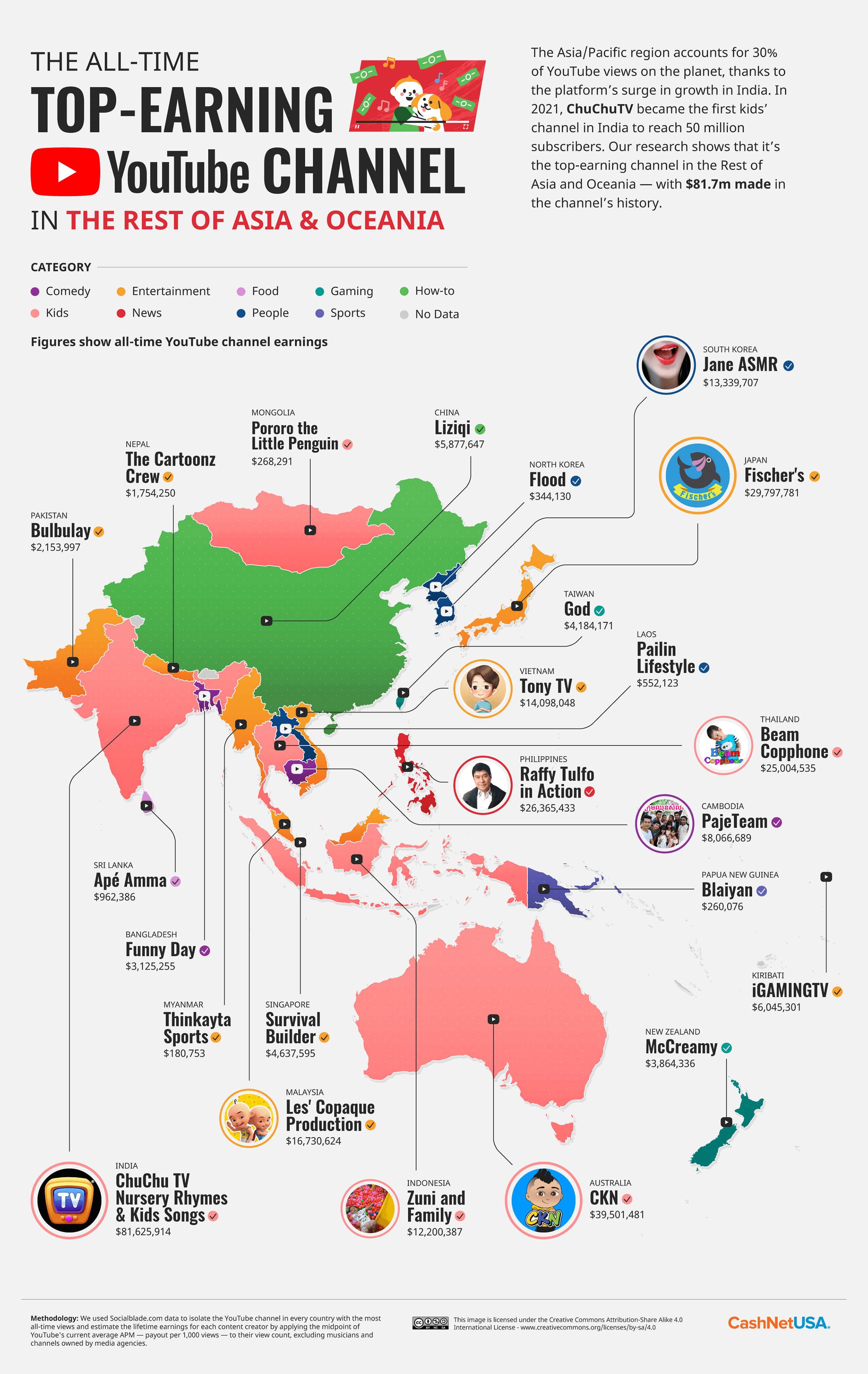 While many of the official Bollywood and K-Pop channels are excluded from our research, individual channels are still thriving in the region. Once again, it’s kid-friendly content dominating the scene. India’s ChuChuTV has earned $81.6m since the channel’s launch in 2013, more than Australia’s CKN ($39.5m) and Japan’s Fischers ($29.8m).

African YouTubers haven’t traditionally been able to reach the viewing figures of large content creators in other regions; they face an uphill struggle as only 22% of Africa’s population have access to the internet. Despite this, there are signs of growing demand for YouTube content in the region. Kenya, Nigeria and South Africa all have at least 300 channels with more than 100,000 subscribers. 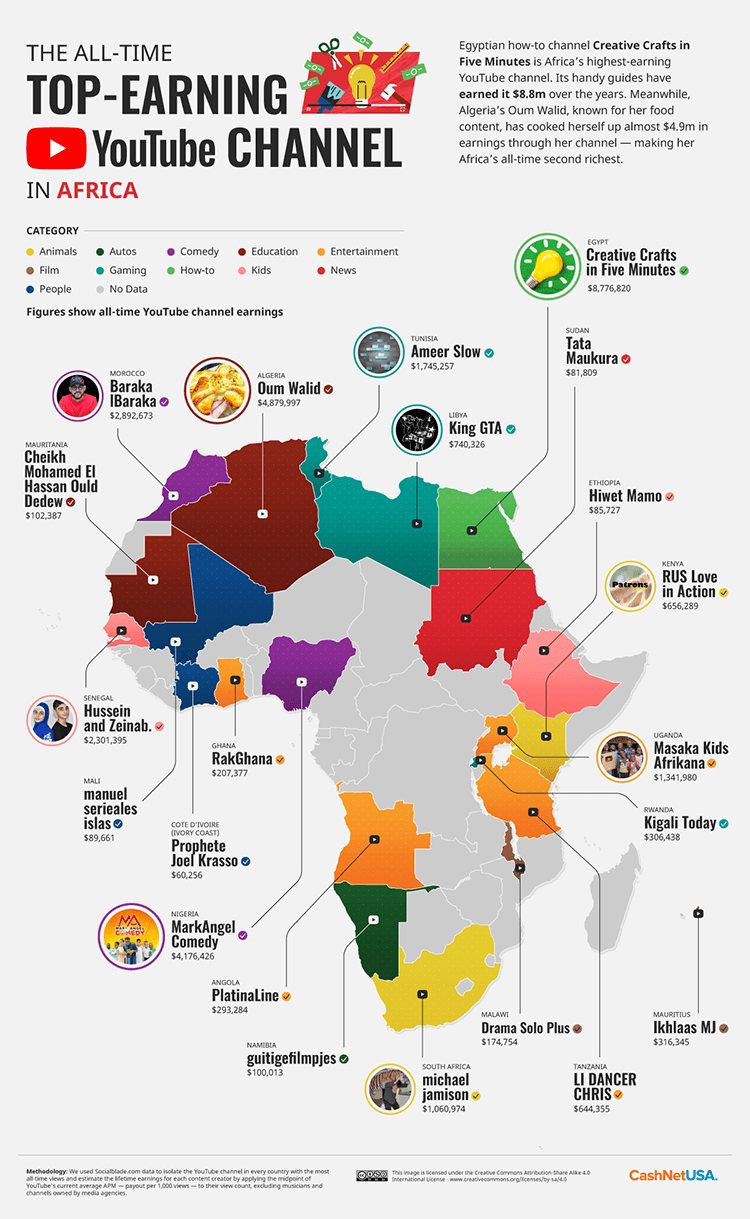 Our research shows that Egypt’s حِرف إبداعية في 5 دقائق (Creative Crafts in Five Minutes) is Africa’s highest-earning channel, with $8.7m of revenue made since its launch in 2017. The handy how-to guides have been viewed more than 4 billion times. Algerian cooking YouTuber Oum Walid ($4.9m) and Nigerian comedian Mark Angel ($4.2m) are also among Africa’s most profitable channels.

As we’ve seen already, videos for children are wildly popular. In 2015, Google launched YouTube for Kids, a TV and mobile app providing a service dedicated to children with stronger parental control features. While it was controversial and could be exploited with inappropriate content, the platform has been incredibly popular.

The Pew Research Center found that just over one-third (34%) of U.S. parents regularly allow their children to watch YouTube videos, but 61% reported encountering content that was unsuitable for kids. For this reason, popular content for children receives larger view counts, often into the billions.

Of the 10 most viewed YouTube videos of all time, five were published by channels creating content for children. With more than 11 billion views, Baby Shark stands head and shoulders above the rest and became a viral sensation back in 2018 and 2019. 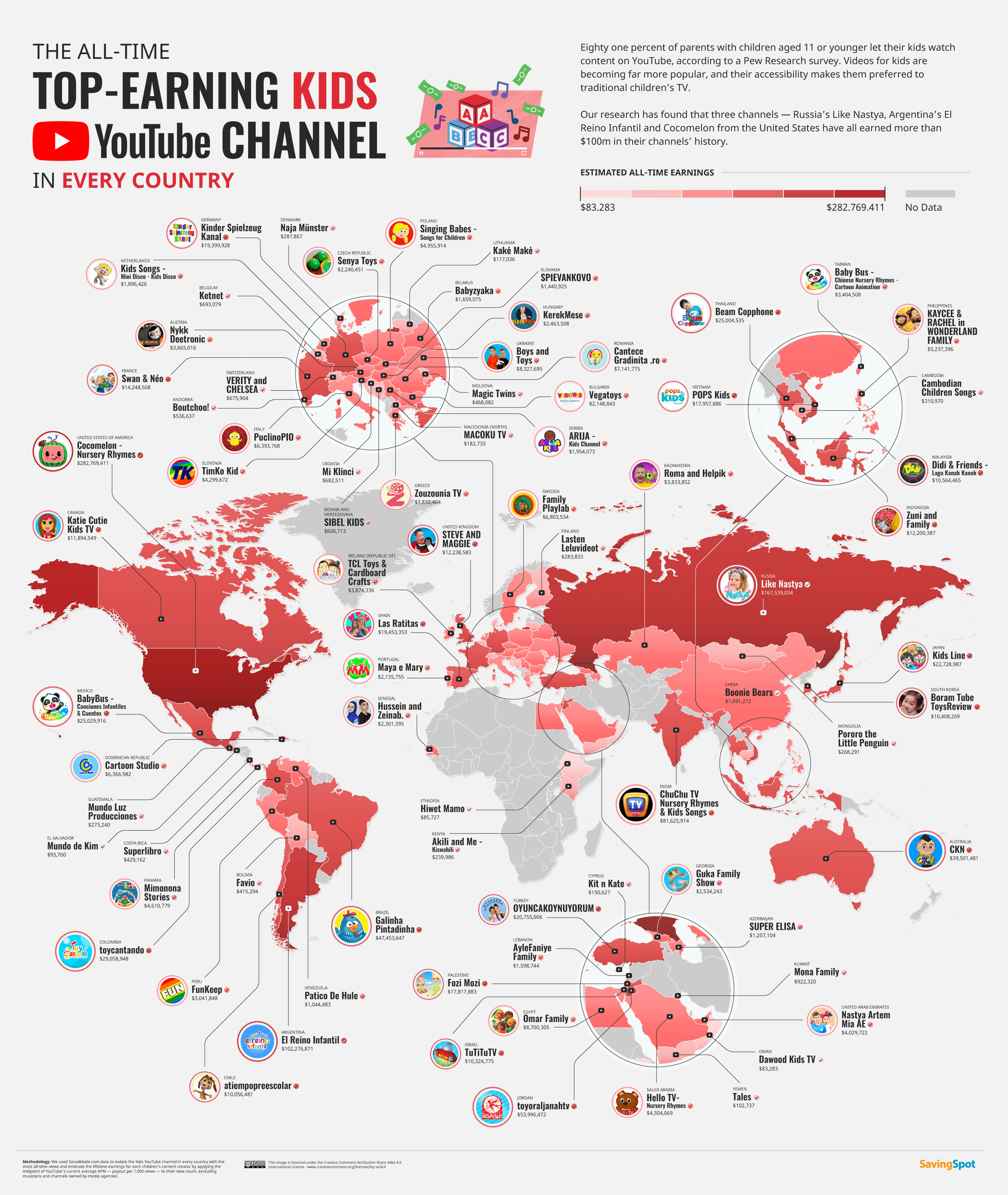 The king of kids’ content in the English-speaking world is Cocomelon, with an estimated $282.8m worth of earnings in the channel’s history. Russia’s Like Nastya ($167.5m) and Argentina’s El Reino Infantil ($102.2m) have also both earned more than $100m in their channels’ lifetimes.

YouTube has traditionally been a haven for gaming content, and it has grown in popularity over the years. Google reports that more than 200 million people watch their favorite YouTubers play video games every day, and two-thirds of the U.S. population under the age of 13 are now considered ‘gamers,’ according to Nielsen. Videos of Minecraft, the world’s best-selling video game, have been viewed more than a trillion times across the platform. 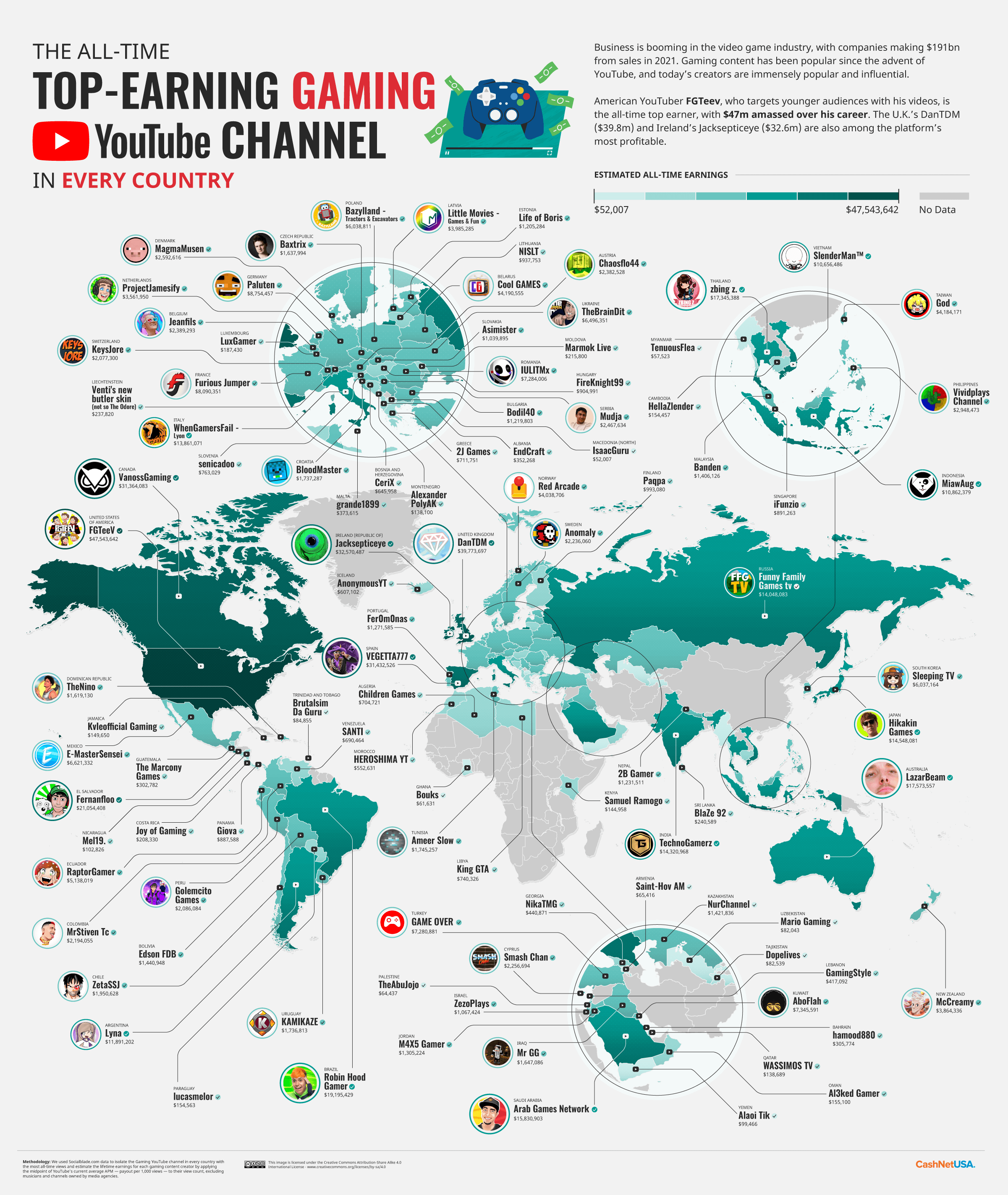 With this kind of engagement, it’s no surprise that gaming YouTubers with large platforms can earn millions from their channels. Despite the impact of PewDiePie on the industry, it is American YouTuber FGTeeV who has earned the most from their channel in their career. Their channel has amassed $47.5m in total earnings, more than the U.K. and Ireland’s top earners, DanTDM ($39.8m) and Jackscepticeye ($32.6m).

Around the world, YouTube’s growth shows no sign of slowing, even in the face of generation-defining competitors like TikTok and Instagram. YouTube’s popularity among Gen-Z will give Google’s content giant long-term staying power over Facebook and Instagram. While natural competitor Twitch gained mainstream popularity during the pandemic, YouTube’s broad appeal is the key to its superiority.

Whatever YouTube content you enjoy watching, you can browse through our full dataset below to see if your favorite channels were the highest-earning in their respective countries.

While a generation of kids has grown up wanting to emulate their favorite vloggers and gaming streamers, another is being raised on kid-friendly YouTube content, from sing-along videos like Baby Shark and La Vaca Lola to real-life adventures such as those of Like Nastya.

We used Socialblade.com data to isolate the YouTube channel in every country with the most all-time views.

We then estimated their lifetime earnings by applying the midpoint of YouTube’s current average APM— payout per 1,000 views — to their view count.

We repeated this just with Gaming channels and Kids’ channels to give separate maps for each category.