Home » The Cheapest Luxury Hotel in Every State 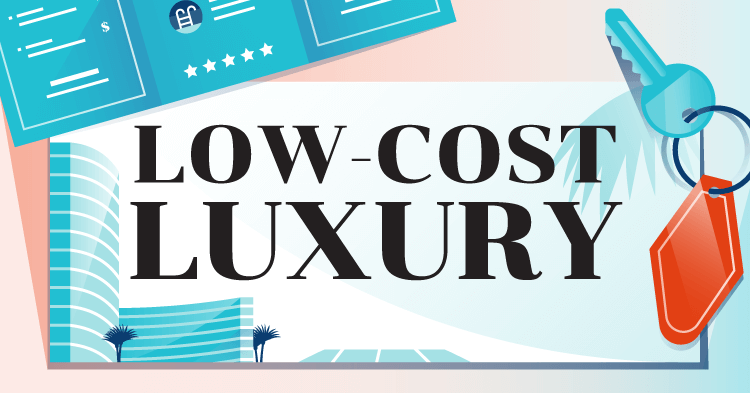 The Cheapest Luxury Hotel in Every State

You deserve it. After months of pandemic-induced confinement, things are getting back to normal — and you need a break. But after so long ensconced in the comforts of home, an ordinary hotel isn’t going to cut it. It’s time to go luxury.

A luxury hotel room is no longer just for rich folk. Industry shake-ups, tech advances and sheer market saturation have made it easier to find an affordable four- or five-star hotel. So whether it’s a big trip you’re looking for or just a random night in opulent comfort, there are top rooms available for well under 200 bucks.

Designer furniture. Arty surroundings. Authentic local flavor. The personal touch. All can be found cheaply within state borders. But it takes some searching to find a bargain, so CashNetUSA has gone ahead and identified the cheapest luxury hotel in every state and 10 major cities. And we’ve even created a roadmap to help you get to the best-priced four- or five-star hotel in each state one after another.

CashNetUSA searched Hotels.com to find the cheapest one-night stay in a five-star hotel in each state. When we couldn’t find an available five-star hotel, we included four-star hotels in our search as well.

America’s Cheapest Luxury Hotels and Where to Find Them

When you just need to get away (and you also just need luxury), you might be guided on your tour by the route, the local attractions… or the price. First up, we’ve highlighted America’s 10 cheapest luxury hotels in the interactive gallery below — please scroll through to read more about each one.

Next, we mapped the cheapest hotel in every state (a regional breakdown follows below). The bargains you can find from place to place vary immensely. The cheapest overall is a four-star Hilton DoubleTree in South Dakota for $73, while we couldn’t find a five-star hotel in Wyoming for under $2k. 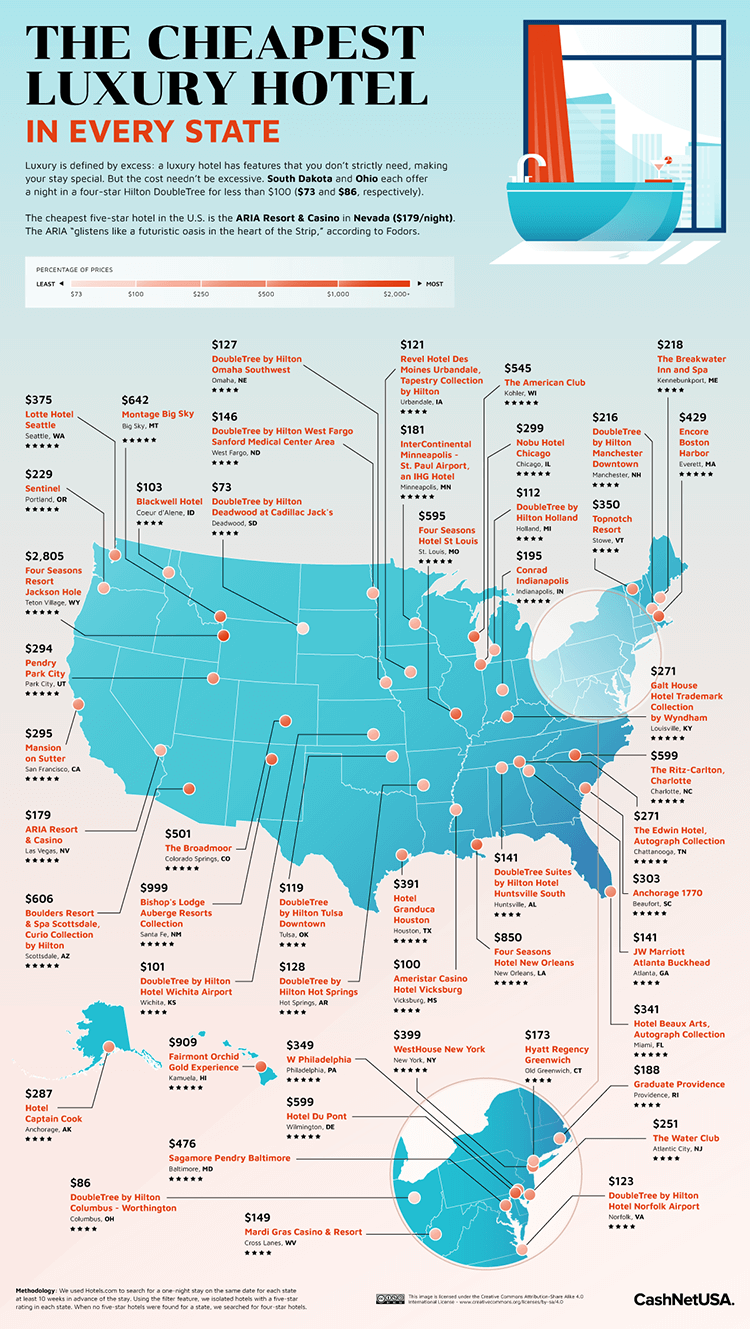 Even though there were no five-stars available in some states and Wyoming’s offering is outlandishly expensive, the price variation remains significant. The cheapest five-star is the ARIA Resort & Casino in Vegas at $179, while we found a trio of states whose cheapest five-star is between $850 and $999 (Louisiana, Hawaii and New Mexico).

Historic Idaho Mansion is the Cheapest Luxury Hotel in the West

The cheapest luxury hotel in the West is the four-star Blackwell Hotel in Idaho (no five-star hotels were available). We found a room for just $103. There are just 10 suites available at this historic Coeur D’Alene site, several of them graced by local artwork and clawfoot bathtubs. The mansion was originally commissioned as a wedding present, making it ideal for a romantic, luxurious and affordable getaway. 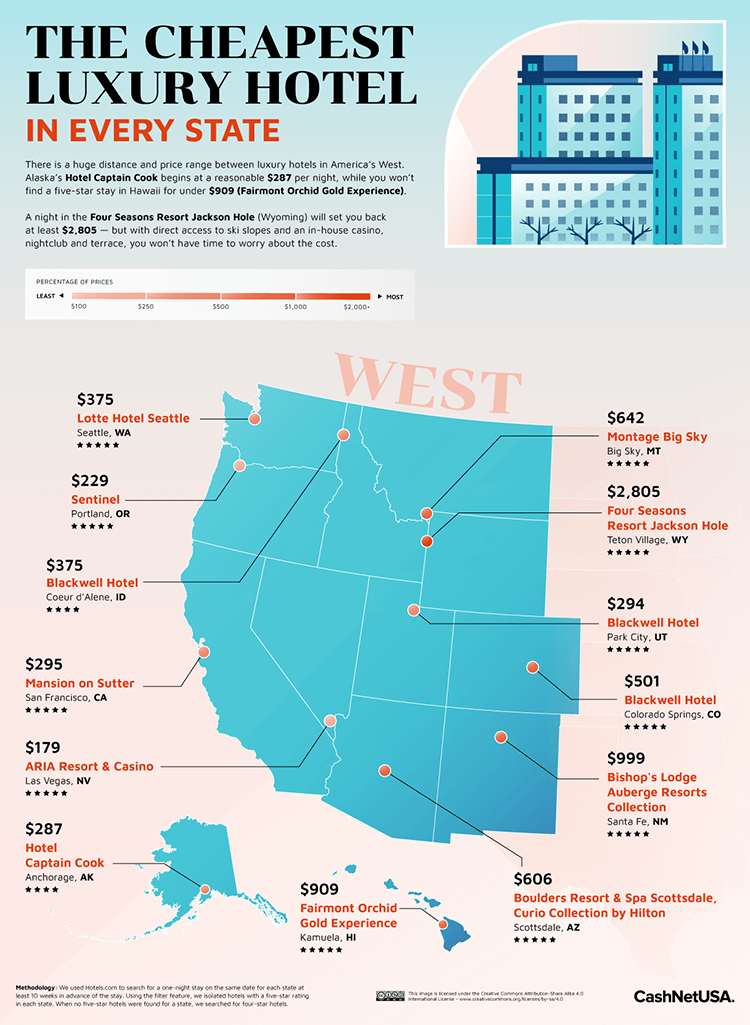 The region’s cheapest five-star is the ARIA Resort & Casino on Las Vegas Boulevard in Nevada. Sleek, spacious and serene, the ARIA is a more modern take on the Vegas experience. With over 4,000 rooms and suites, prices vary according to amenities — but we found a room for just $179, the cheapest five-star stay in our study.

South Dakota is home to the cheapest luxury hotel in the Midwest and our whole study. With no available five-star rooms, our trawl of the Mount Rushmore state’s luxury hotels zeroed in on DoubleTree by Hilton Deadwood at Cadillac Jack’s. Some rooms at this casino hotel even boast their own roaring fireplace. 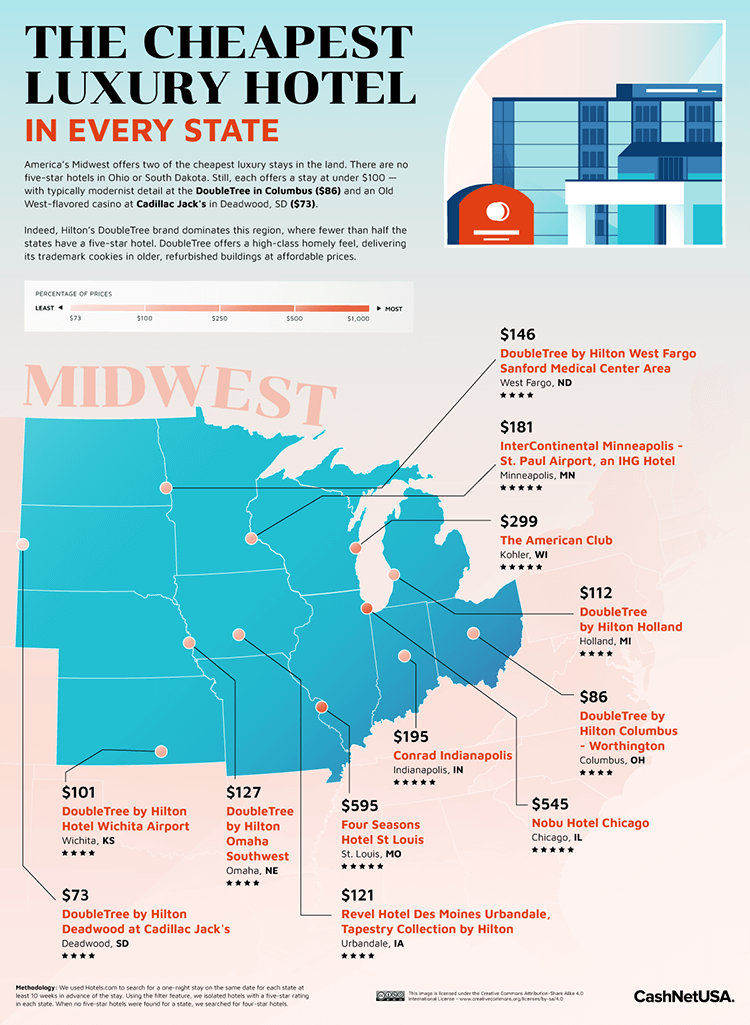 The top five-star bargain in the region is the InterContinental Minneapolis at St. Paul Airport. Air passengers with carry-on bags can step directly from the airport to this adjoining hotel via the sky bridge. The hotel’s peculiar “folded curtain” wall is designed to evoke the Minnesotan lakes, a biomorphic touch that is echoed in the generous use of stone, wood and glass interiors.

We found a room for $100 for a night at the Ameristar Casino Hotel Vicksburg, the cheapest luxury hotel in Mississippi and the Southern U.S. While classical interiors and luxurious fittings mark the hotel itself, the biggest selling point here is the adjacent casino — a riverboat venue featuring 1,500 slot machines, 36 table games and a 10-table poker room. 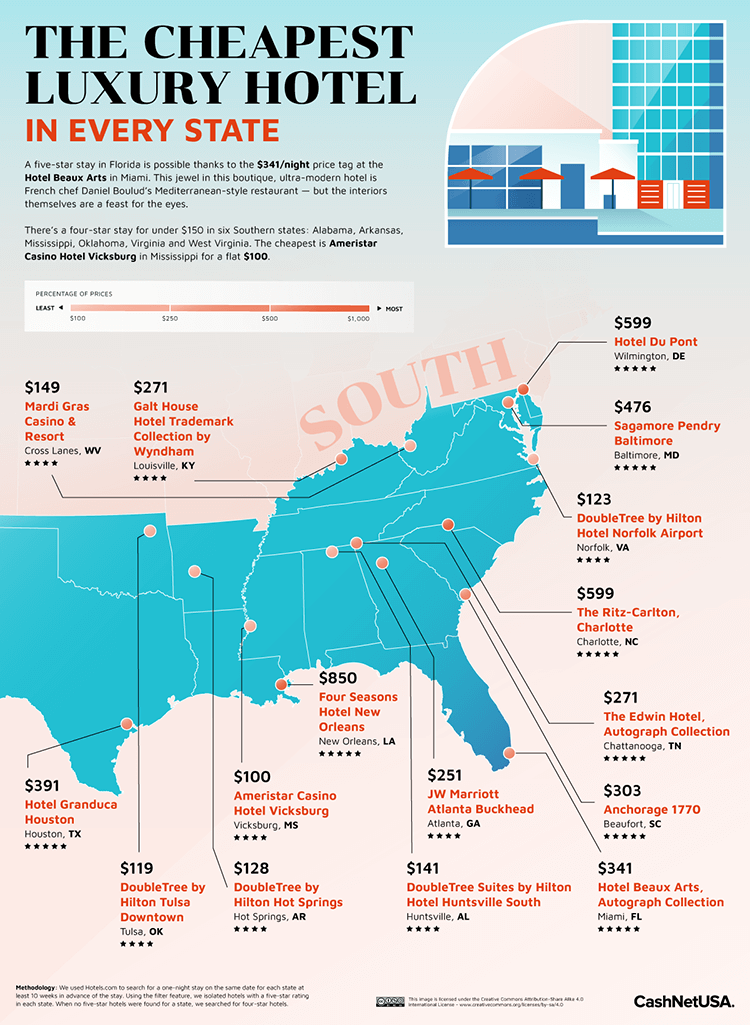 For a bargain five-star stay, try the Edwin Hotel in Chattanooga, Tennessee, where we found a room for $271. Part of the Marriott’s Autograph Collection, the Edwin offers funky interiors and curated artwork. The hotel’s Whitebird restaurant gives indigenous and traditional Chattanoogan cooking a modern twist.

Beachside Connecticut Hotel is Best Bargain in the Northeast

You might forget you’re near the beach at the Hyatt Regency Greenwich; such is the appeal of the venue’s whirlpool, indoor saltwater lap pool and atrium sundeck. We found a room for just $173, making it the cheapest luxury hotel in the Northeast. 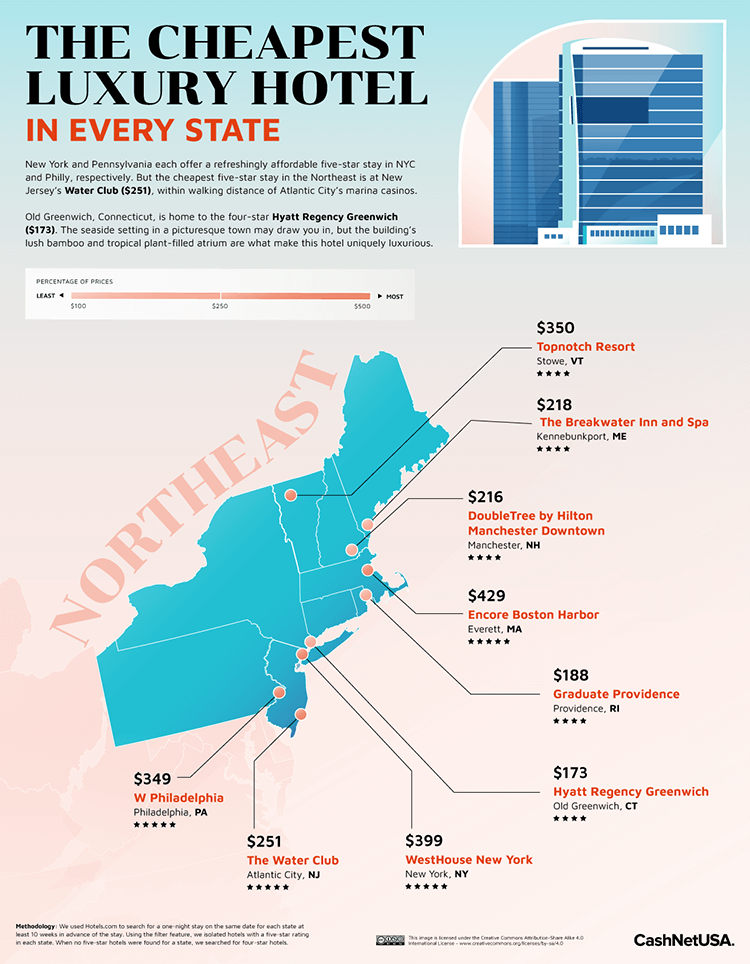 Two hundred miles south of the Hyatt Regency Greenwich, you can find the region’s cheapest five-star hotel: The Water Club in Atlantic City. A two-story spa looks out over the Atlantic Ocean, while seven exotically designed pool areas will give you the beach resort feel even out of season. The Water Club is designed to give a unique members club feel to the casino district, and it is the cheapest five-star hotel in the region.

A Road Trip Via the Cheapest Luxury Hotel in Every State

Serious about low-budget luxury hotels? We worked out the most direct route you can take to the cheapest luxury hotel in every state (apart from Hawaii).

It’s a 17,476-mile road trip which will cost $17,581 for accommodations if the 49 hotels in question happen to charge the same figure we identified for our control date. If you prefer to be guided by your belly, here’s our fastest route to the best breakfast spots across the States.

We narrowed our search to the country’s 10 most populous cities, and here’s what we found. Three of the top 10 are in Californian cities, and three are in Texas, while NYC’s cheapest is the WestHouse on West 55th, where a room can cost as little as $399.

The cheapest major-city five-star hotel is the Signia San Jose in California, from $309. The Signia was formerly the Fairmont but reopened under Hilton’s Signia brand in April 2022, following a $35 million renovation.

How to Find an Affordable Luxury Hotel

When looking for a cheap luxury hotel — whether it’s one of the above or something in a specific destination you had in mind — there are ways and means of ensuring you get the best price possible.

Flexibility is key since prices vary by season and even from day to day. Use a comparison site to identify the best bargains on your preferred date. But don’t book straight away — call the hotel first to see if they have an offer that the comparison site missed or if they’ll make you a deal for booking directly. You’ve got nothing to lose but your cobwebs!

We used Hotels.com to search for a one-night stay on the same date for each state at least 10 weeks in advance of the stay. Using the filter feature, we isolated hotels with a five-star rating in each state. When no five-star hotels were found for a state, we searched for four-star hotels. For states without a state-wide search option, we instead searched the five most populous cities to find a hotel. In addition, we identified the 10 most populous U.S. cities and repeated the process to identify the cheapest five-star hotel in each. The data was gathered from July to August in 2022.