Home » The Nicknames of Places in Canada and the United States 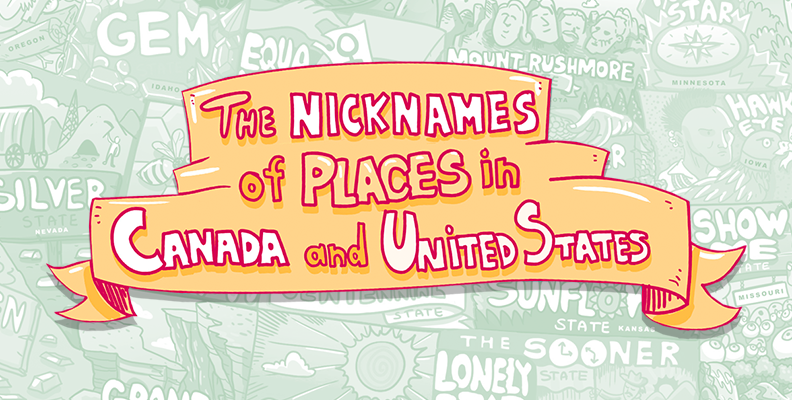 The Nicknames of Places in Canada and the United States

A nickname is an emotional thing.

We give nicknames to people and places we love, (or love to tease). For a nickname to catch on, it needs to have a grain of truth in it. That’s why the nicknames of states and provinces often come from the inhabitants, and not from the tourist board!

These affectionate tags are the key to an area’s history. They tell us what their early inhabitants valued about the place they lived. We researched the best-known or most popular nicknames of every state, province, and territory in Canada and the United States and created three new maps of their alternative names. 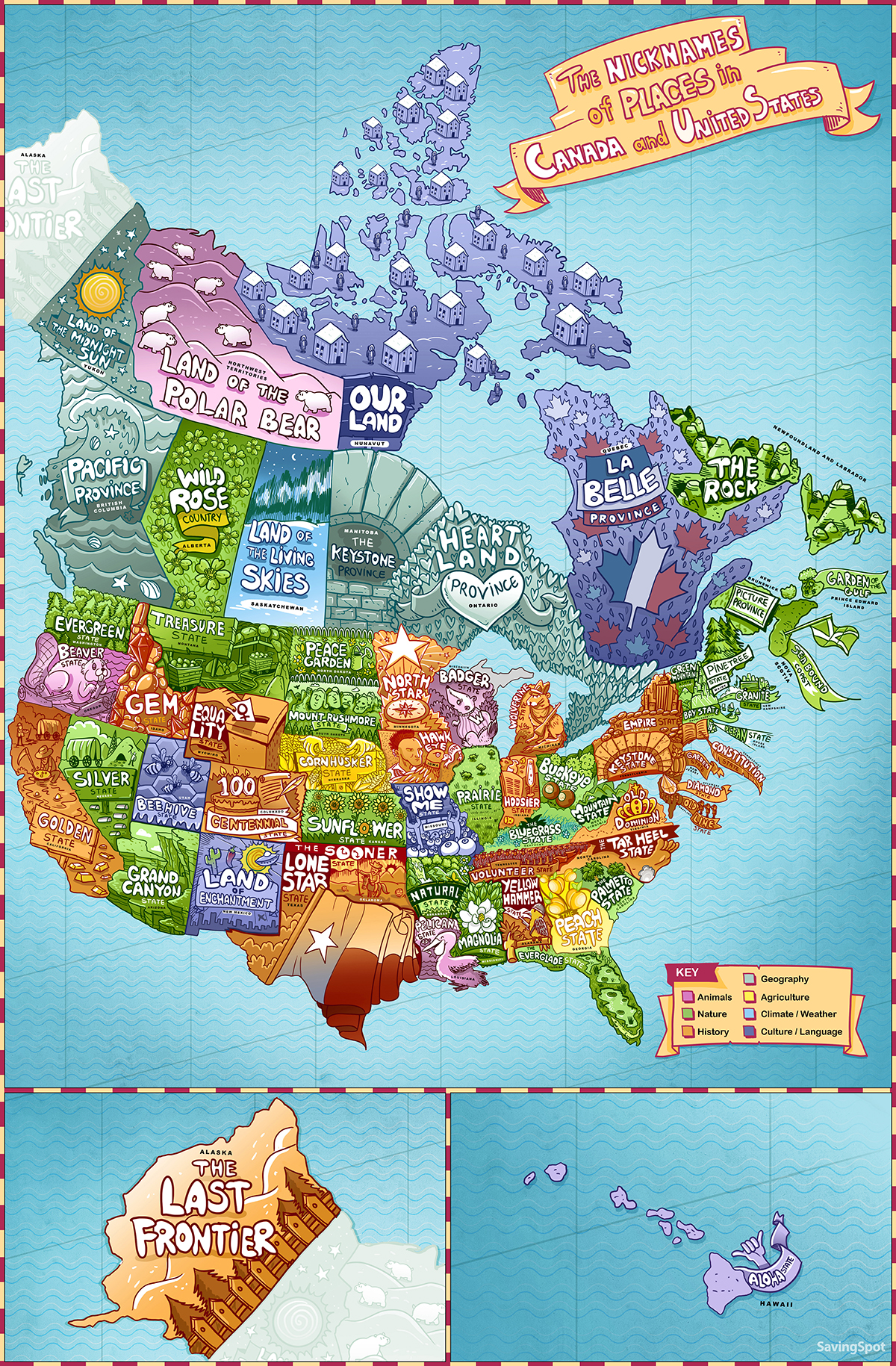 The Nicknames of States in the U.S.

“I don’t know what it is about Hoosiers,” Kurt Vonnegut wrote about the people of Indiana – ‘the Hoosier State.’ “But wherever you go there is always a Hoosier doing something very important there.”

The famous writer was a Hoosier himself, and he had fun mythologizing the nickname of Indiana and its residents. But strangely enough, nobody really knows the real source of the name. One explanation? As a state of pioneers, it is speculated that Indiana’s first residents would cautiously yell “who’s yere?” when somebody knocked on their cabin door.

And how did Utah – a city not particularly known for its beehives – come to be nicknamed ‘the Beehive State’? It’s a story that goes back to a misunderstanding of the Bible.

For its Mormon founders, Utah was ‘the land of milk and honey’ promised in the good book. Hence the honeybee. In fact, there were no honey bees in the Middle East of the Bible, so the honey would have come from date fruits. Still, the father of American literature, Mark Twain, came up with a failsafe alternative explanation:

“The Mormon crest was easy,” wrote Twain. “And it was simple, unostentatious and it fitted like a glove. It was a representation of a Golden Beehive, with all the bees at work.” 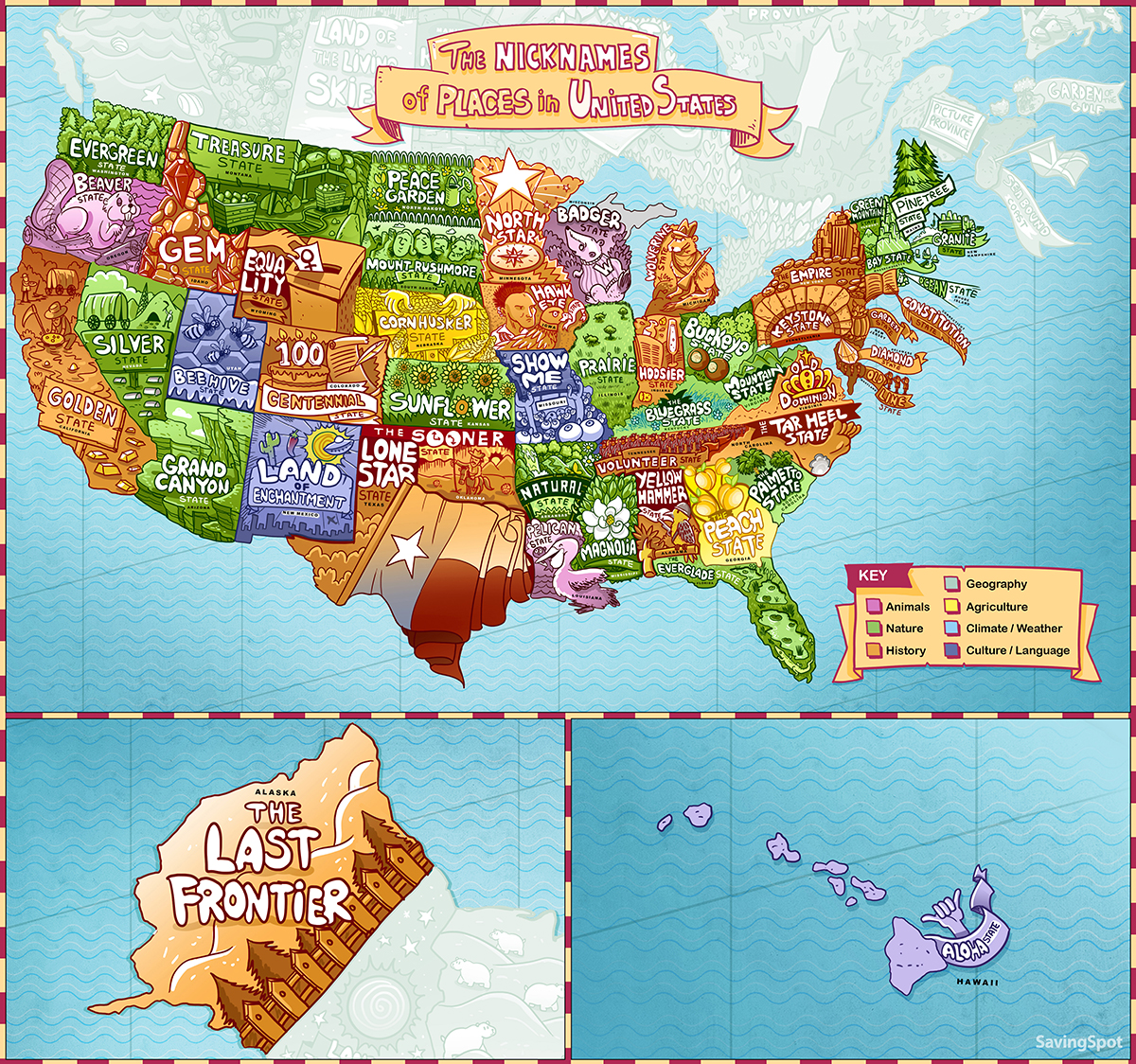 The Nicknames of Provinces and Territories in Canada

Manitoba used to be around 5% of the size it is today, and it is easy to imagine early colonists feeling hurt by its first nickname: ‘The Postage Stamp Province.’

However, over the years, Manitoban pride expanded with the territory. Today Manitoba is nicknamed ‘the Keystone State,’ either because of its shape or its position at the center of Canada – depending on who you ask.

The territory of Nunavut is known as “Our Land.” The nickname is superficially a simple translation of the Inuktitut word ‘Nunavut.’

It took more than twenty years of negotiation before the Inuit people were able to establish Nunavut Territory in 1999. Indigenous groups had lived on the land for 4,000 years before the Europeans turned up, which explains why, following the Nunavut Land Claims Agreement in the 1990s, the locals expressed their pride with a nickname that echoed the official name: Nunavut, Our Land. 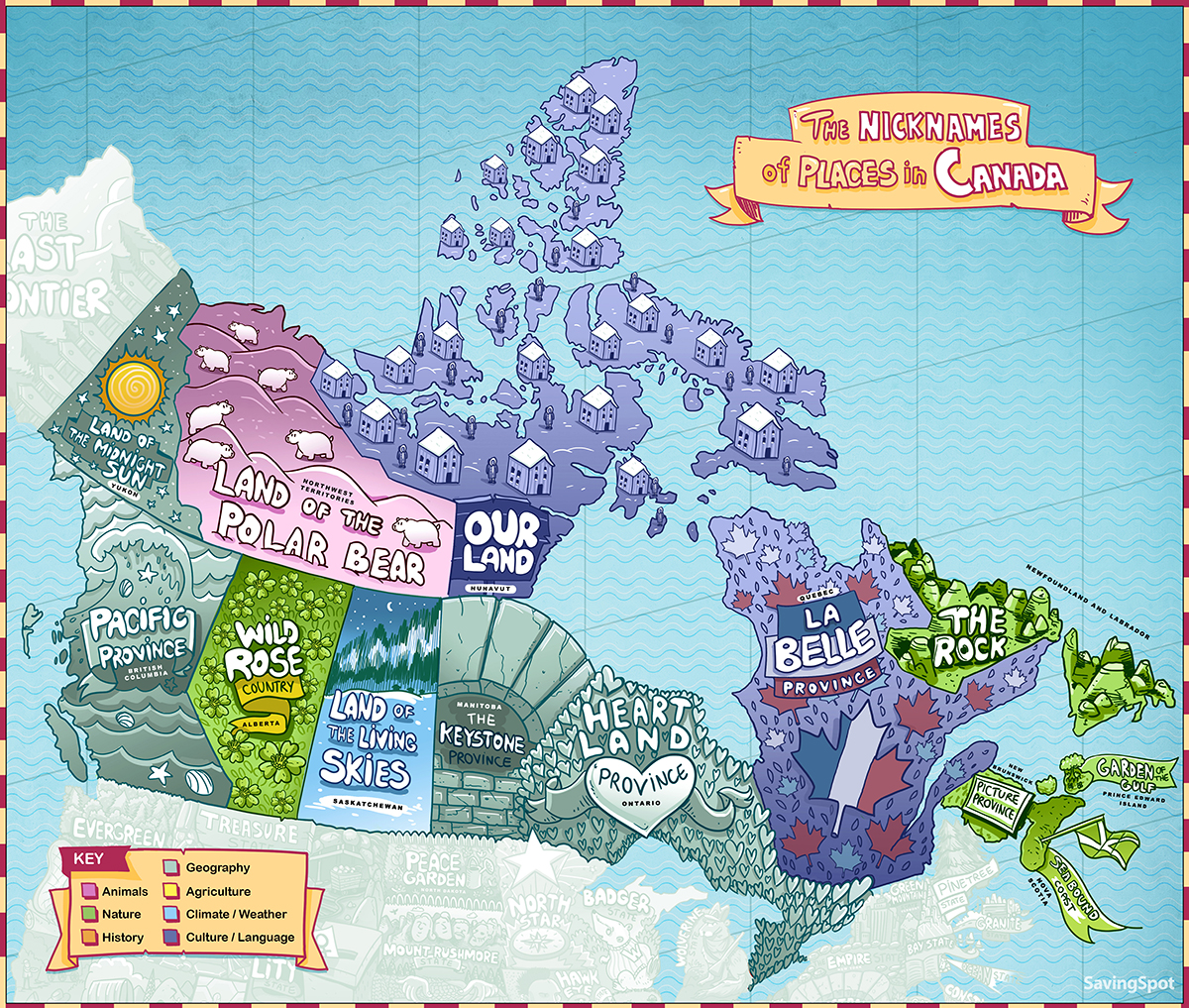 A place’s nickname gives more than the history of the state or province it describes. It tells of the spirit and the feelings of those who call it home. Do you know the story behind your home state’s nickname?

For the research and sources behind this map, please visit this Google sheet.

In order to create these maps, we gathered the three most popular nicknames for each state in the U.S. and each province/territory in Canada. We categorized each nickname into one of seven categories: History, agriculture, nature, geography, culture/language, animals, or weather/climate. Next, we shortlisted one nickname for each location – usually the best-known or most popular – and with these final selections, created our three maps.