Home » The Real Value of the Queen’s Crown 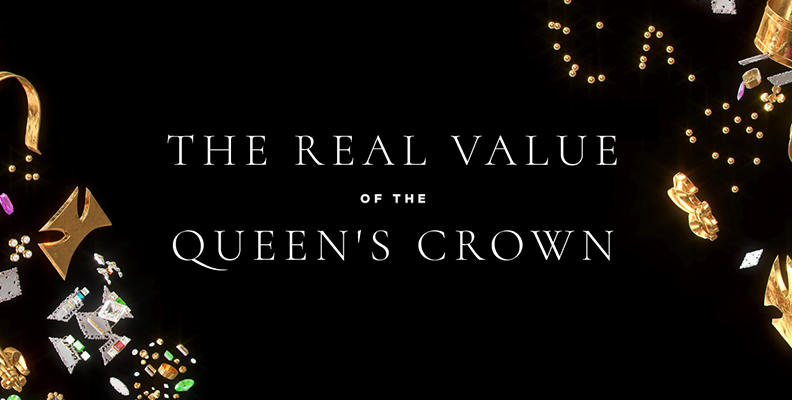 The Real Value of the Queen’s Crown

The crowns, robes and ceremonial regalia in The Crown Jewels collection have been sitting safely in the Tower of London for over 600 years. They have attracted over 30 million visitors, making them possibly the most visited objects in Britain. They are powerful symbols of the British Monarchy, and each piece tells many stories from the island’s history. 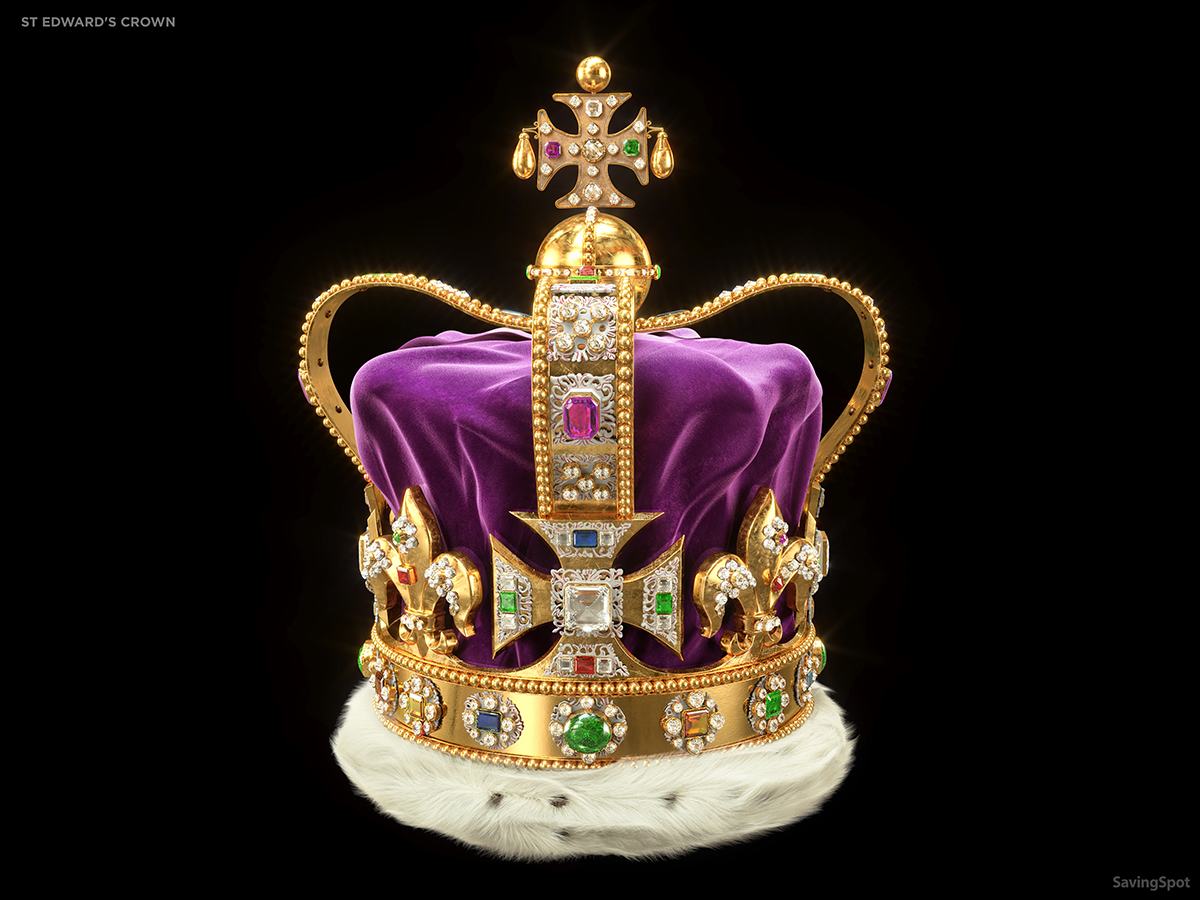 St Edward’s Crown is only used briefly to crown the incoming monarch, but it‘s arguably the centerpiece of the collection and the most important and sacred of all the crowns. It was made in 1611 to replace the medieval crown that was melted down after Parliament abolished the monarchy during the English Civil War. At first, the crown was adorned with hired gems, which were returned after each coronation. But in 1911 the crown was permanently set with semi-precious stones for the coronation of George V.

The Crown Jewels are not insured as they are considered priceless due to their historical importance. So, putting a price on them is difficult. The entire collection has been estimated to be worth more than $3.5 billion, but no exact figure has ever been ventured for the individual items.  So, we decided to try and find out how much St Edward’s Crown is really worth by evaluating and pricing every individual part of the crown. From the fur lining to the tiniest gem we researched and priced every single part of the crown and found out its exact material worth. 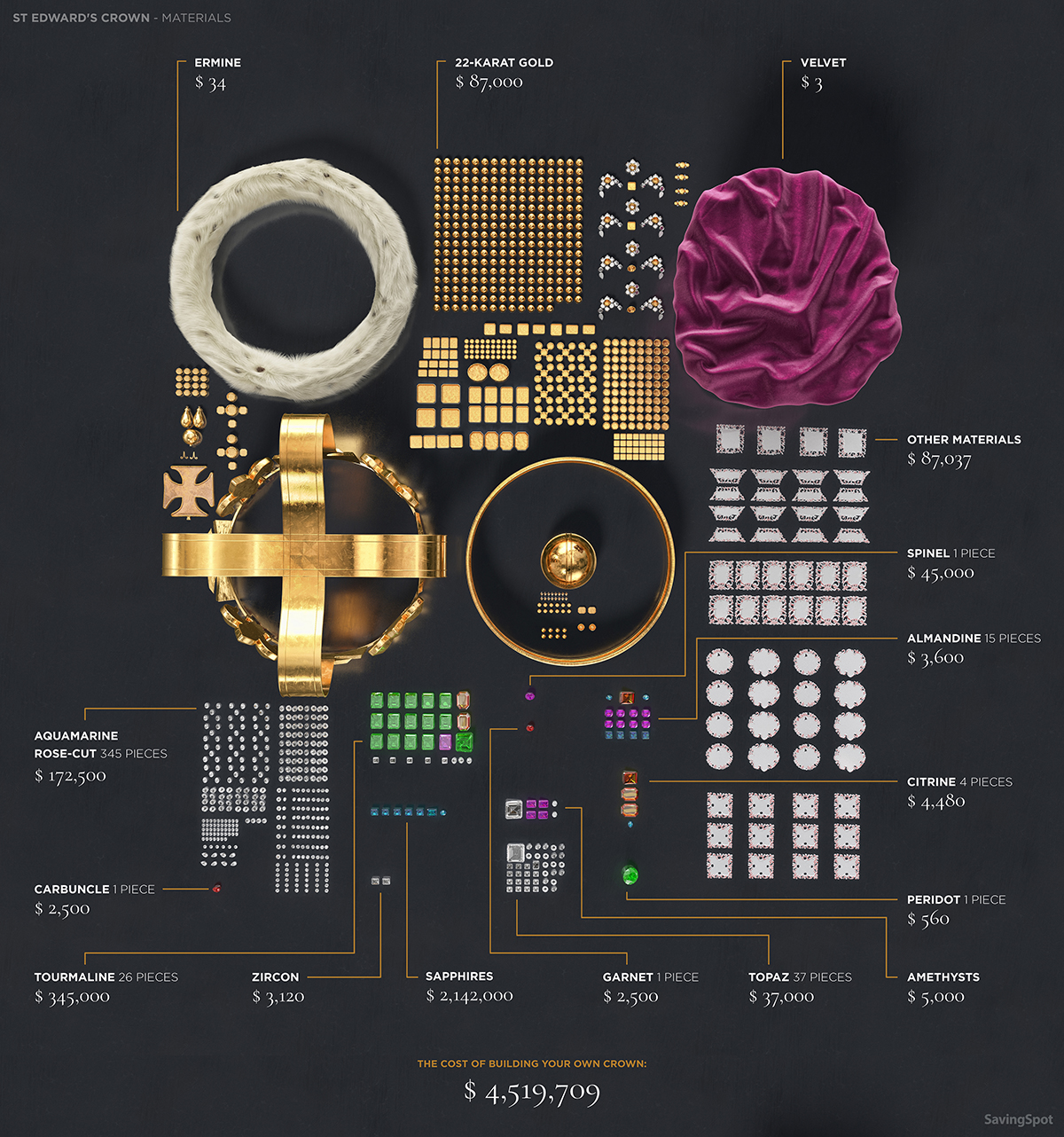 How did we come up with the figures presented in this design?

To put a value on the crown, we first collected information and images of the Crown (including diagrams from this rare two-volume collector’s book).

We then used the International Gem Society‘s gem size guide and the images, to gauge the number of carats in the gems to determine their rough weight. We then estimated the weight of the velvet and ermine based on the size of the crown. We subtracted all of this from the total weight of the crown to give us the weight (and value) of the gold in the crown. We consulted the catalogue of the Queen‘s official supplier of fabric to get a value for the velvet and researched the average price of ermine to give us a value for this.

Next, we estimated the value of each gem. Before we undertook this process, we consulted a registered gem valuer who explained the limitations and problems we were faced with. A qualified gem valuer would need to remove each gem from the crown and inspect them with specially designed instruments to ascertain the age, location, size and value of each one. So, we had to develop a methodology based on these limitations.  For this, we used the International Gem Society’s pricing guide and images of the crown, including diagrams of the placement of each gem from the two-volume Crown Jewels reference book.

For a full breakdown of our calculations and working method follow this link –http://bit.ly/QueensCrownMethodology

How much do you think this priceless crown is really worth?

Blair, C. (1998). The Crown Jewels: the history of the Coronation regalia in the Jewel House of the Tower of London. London: Stationery Office