Home » The Price of a Cup of Coffee in Every State 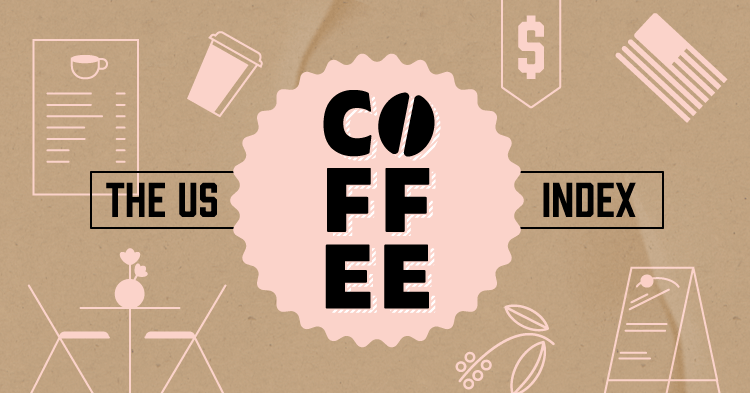 The Price of a Cup of Coffee in Every State

One must-have luxury on any road trip across America is a stellar cup of coffee every morning. No matter where you are in the States, knowing where to find the best cup of Joe is going to make your trip go with a bang.

But how much will it cost to refuel (on caffeine) across the US? Our World Coffee Index 2021 highlighted the cost of coffee in every country in the world, but this time we wanted to shift our focus to the United States exclusively. So we used Menuwithprice.com to gather the prices of over 10,000 coffee shops across 2,500 cities in the US.

Washington State Has the Most Expensive Coffee

The five most expensive coffees in the US can be found in Washington state. Seattle leads the pack at $3.92 per cup, with Olympia, Kennewick, Tacoma, and Bremerton (all in Washington) serving you coffee for north of $3. 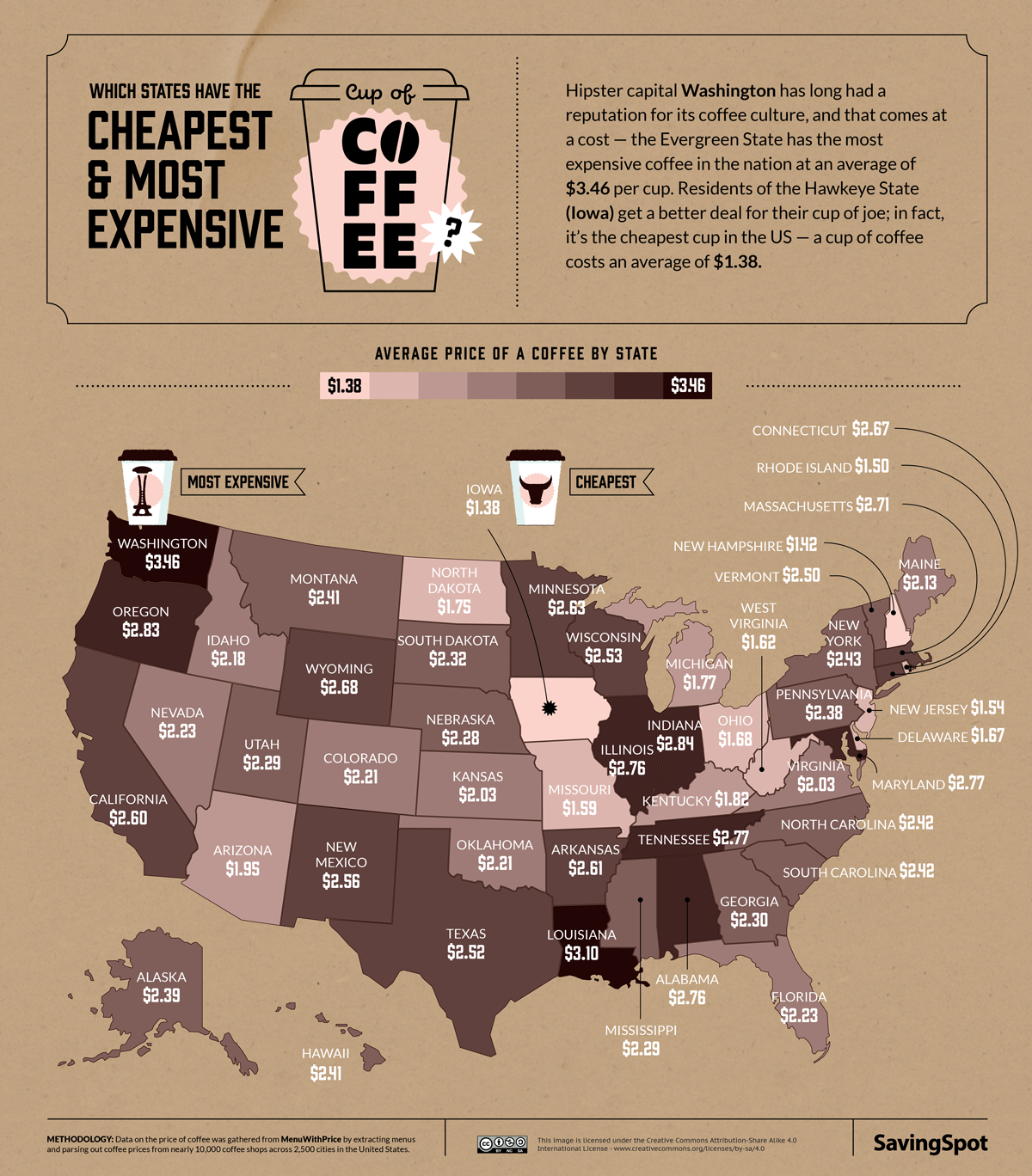 Seattle has a well-established reputation for its coffee culture, but where did it all begin? The story of the city’s love affair with the world’s favorite bean goes all the way back to the late 1960s, when new coffee houses began to spring up all over the place. Could it be the weather? The cold and rainy days combined with the bohemian culture of the times made for a perfectly cool and caffeinated storm.

Hawaii State Has the Most Cafes Per Mouth

Hawaii has the most coffee shops per capita— 41 coffee shops on every 100,000 people. Colorado has 29 per capita, and then we have a three-way tie with Washington, California, and Oregon. 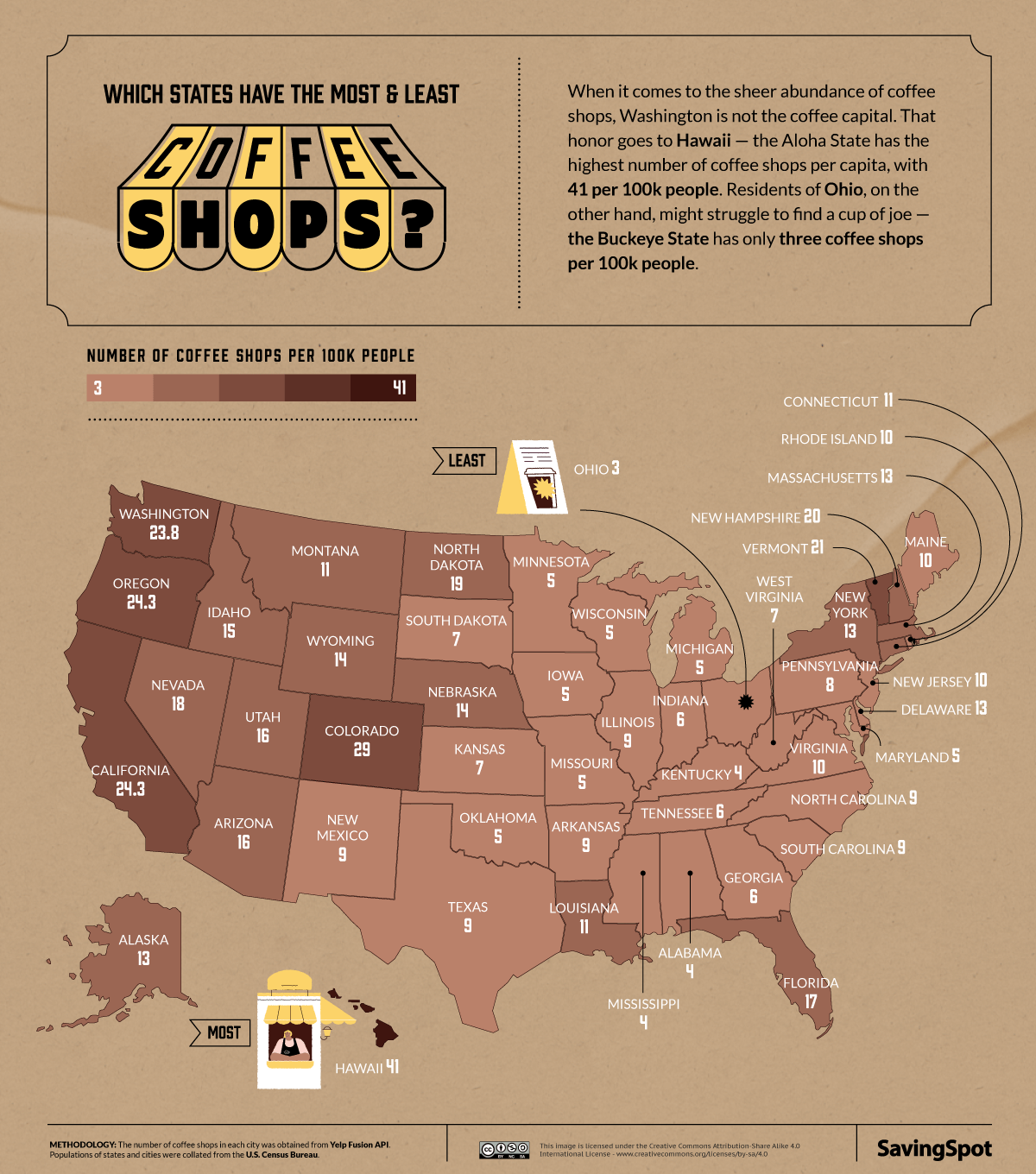 Honolulu has 585 coffee shops, which makes it the easiest place to find coffee in Hawaii. Famous for their Kona coffee, prized the world over for its full-bodied flavor, to this day, the state remains the only one in the United States that commercially produces coffee. By the 1950s the ​​Big Island produced more than 17 million coffee beans per year — the largest harvest of any coffee region in the world.

Louisiana State Has the Least Affordable Coffee Compared to Income

Louisiana is the state with the least affordable coffee compared to income — $3.10, which is 18% of the median hourly pay in that state. It might be on the expensive side, but the Big Easy is the perfect place to drink a special kind of café au lait (French for coffee with milk). In one of the oldest coffee shops here (opened 150 years ago in New Orleans), you can get one with three magic ingredients: espresso, milk, and chicory. 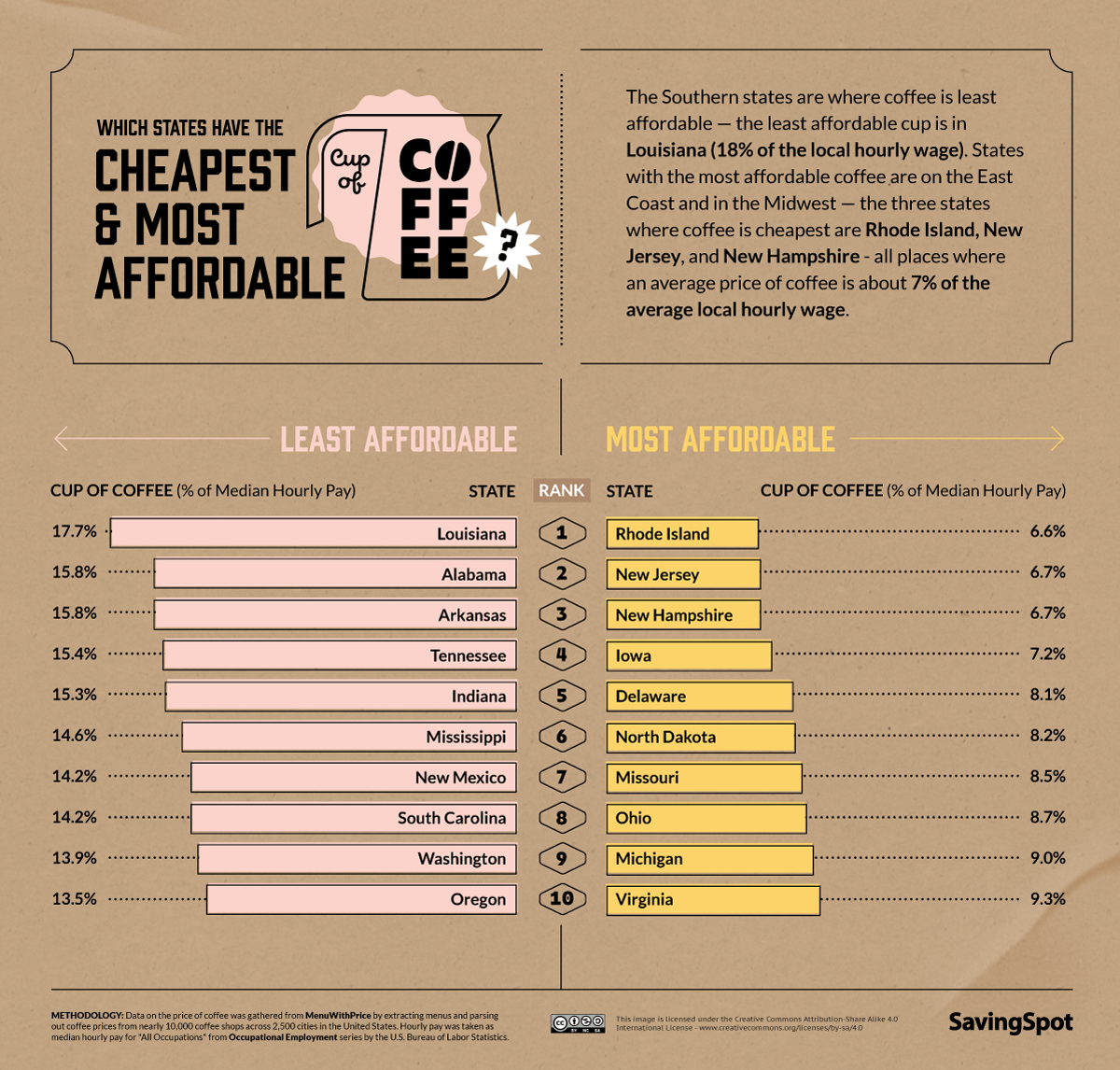 Southern states such as Alabama, Arkansas, and Tennessee are close to Louisiana with their prices — 16% and 15% of the median hourly pay in each state. The South might be where a cup of coffee is the least affordable, but they make it with a special kind of charm that just feels worth it.

Harrisburg, PA, is the American City with the Cheapest Coffee

With an average price of only $1.18, Harrisburg is the American city where you can drink the cheapest coffee. In fact, it’s the cheapest cup of coffee you’ll find in the whole country.  Arguably the city became a coffee lover’s best friend not just because of the price but because of Midtown Scholar Bookstore. Here, you can have a cup of coffee and lose yourself in one of the 200,000 old and new books on offer. 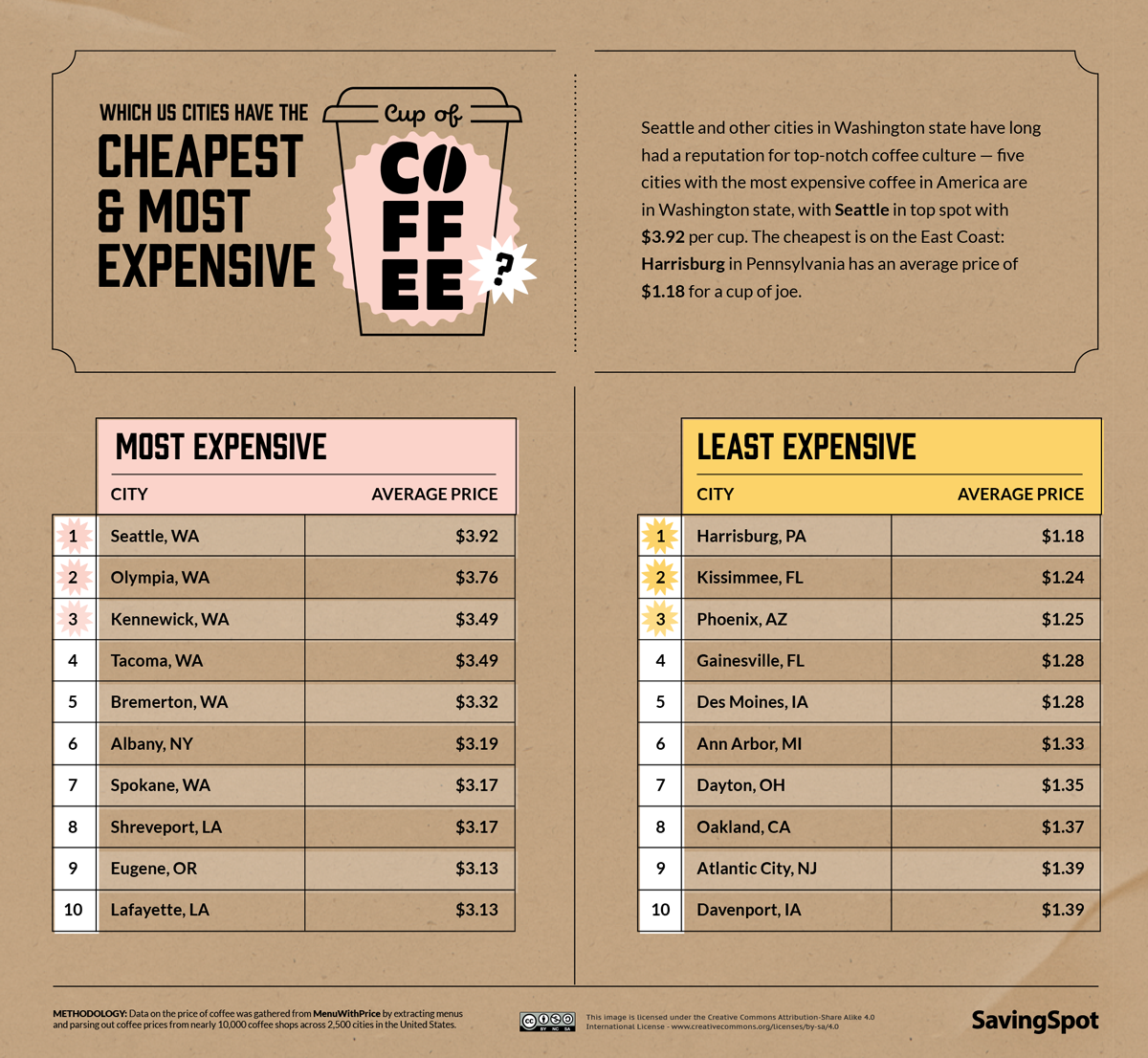 The Midwest is a good place to go if you’re on the hunt for cheap coffee. The average cost for a cup in Des Moines is $1.28, and it’s not much more in Ann Arbor and Dayton. Furthermore, the state with the cheapest coffee is Iowa, where a cup will cost an average of $1.38. Safe to say that coffee culture is slowly becoming a cultural cornerstone in America’s Heartland.

A Coffee a Day Brings Insight Your Way

It’s believed that people in Ethiopia were drinking coffee as early as the 9th century, and since then it’s pretty much taken the world by storm. The USA is no exception, with many citizens guzzling it down all day, every day.  By taking a look at prices around the country, we get an insight into American coffee culture.

Data on the price of coffee was gathered from Menuwithprice.com by extracting menus and parsing out prices of coffee from nearly 10,000 coffee shops across 2,500 cities in the United States.

Hourly pay was taken as median hourly pay for “All Occupations” from Occupational Employment series by the U.S. Bureau of Labor Statistics. For states, the state’s hourly pay was used, while for cities, the hourly pay estimate was that of the metropolitan area that city belongs to. Populations of states and cities were collated from the U.S. Census Bureau.

Data was collected in September 2021.