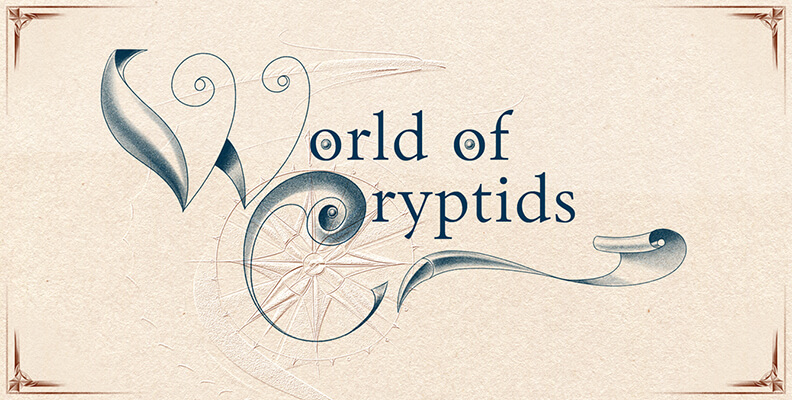 Every Country’s Most Famous Mythical Creature

The Sasquatch. Baba Yaga. Curupira. They are all bizarre creatures who have been widely claimed to exist – although nobody has delivered proof. That makes them cryptids and consigns them to the realm of pseudoscience. But it doesn’t mean they’re not real.

Every culture is riddled with unconscious fears and shared hang-ups. When a sequence of strange events occurs, it doesn’t take long for someone to conjure a scapegoat whose weird characteristics fit the crime. If the scapegoat catches the imagination of the locals, the legend grows and mutates over the weeks, years, and centuries. The cryptid lives and breathes in the minds of those who believe and those who say they don’t.

A while back, CashNetUSA showed you the most famous cryptid in every US state. But now we’ve extended our search, identifying the most popular mythical creature in every country of this weird old planet of ours. 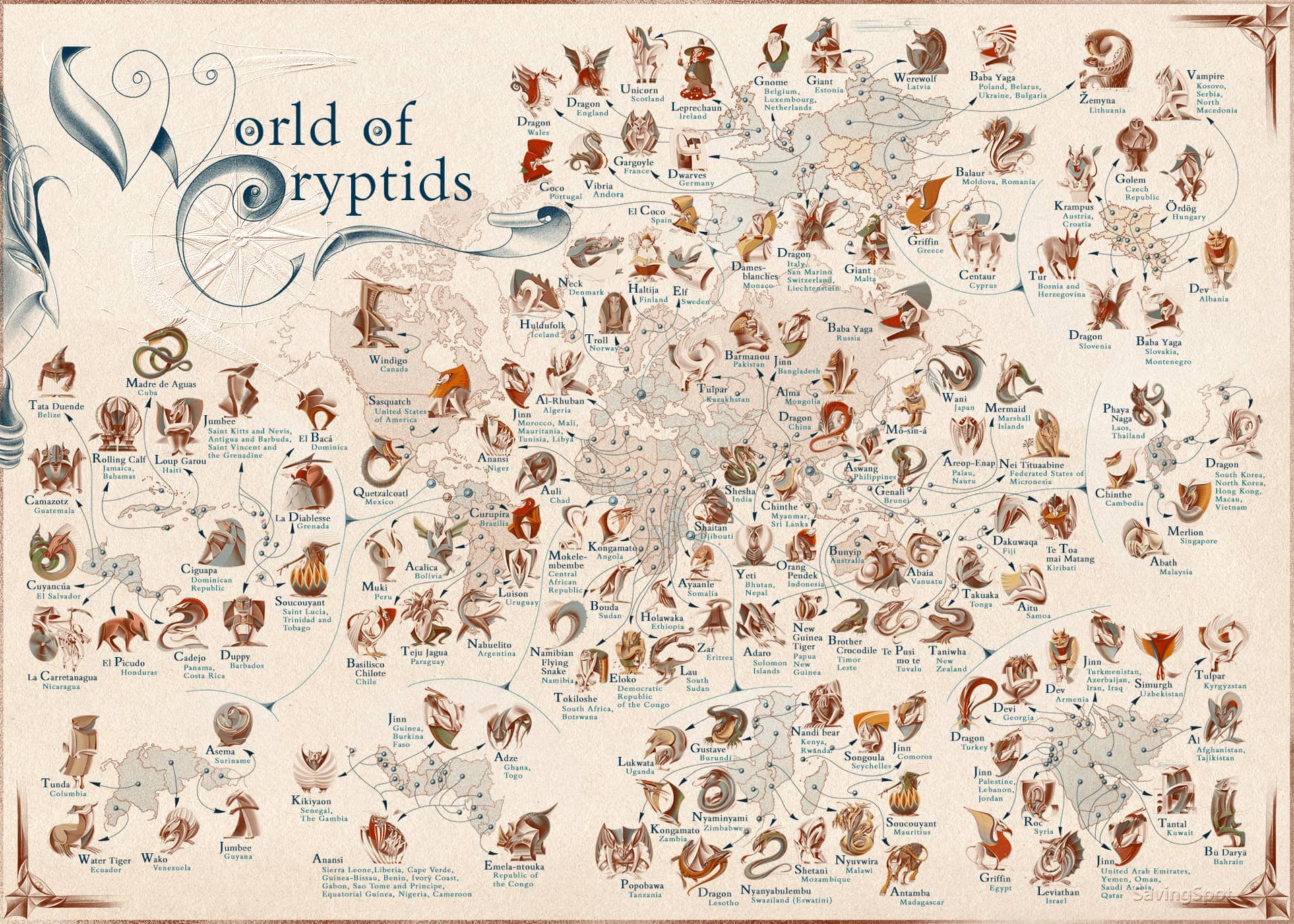 We trawled bestiaries and encyclopedias such as Monsters and Mythical Creatures from Around the World and longlisted every country’s “who’s who” of cryptids. Then we crunched the numbers on Google to see which creatures were the most-searched in each location.

Sometimes, multiple countries shared the same cryptid. In these cases, we paid special attention to the fine details reported by the spooked ancestors and trembling tourists that have come into contact with them over the years. For example, the English dragon is winged and lizard-like, while the Chinese dragon is wingless and snakeish.

Finally, we worked with illustrator Laimute Varkalaite to create a series of maps showing the most notorious cryptid in every country on earth: the mythical creatures that refuse to properly not exist. 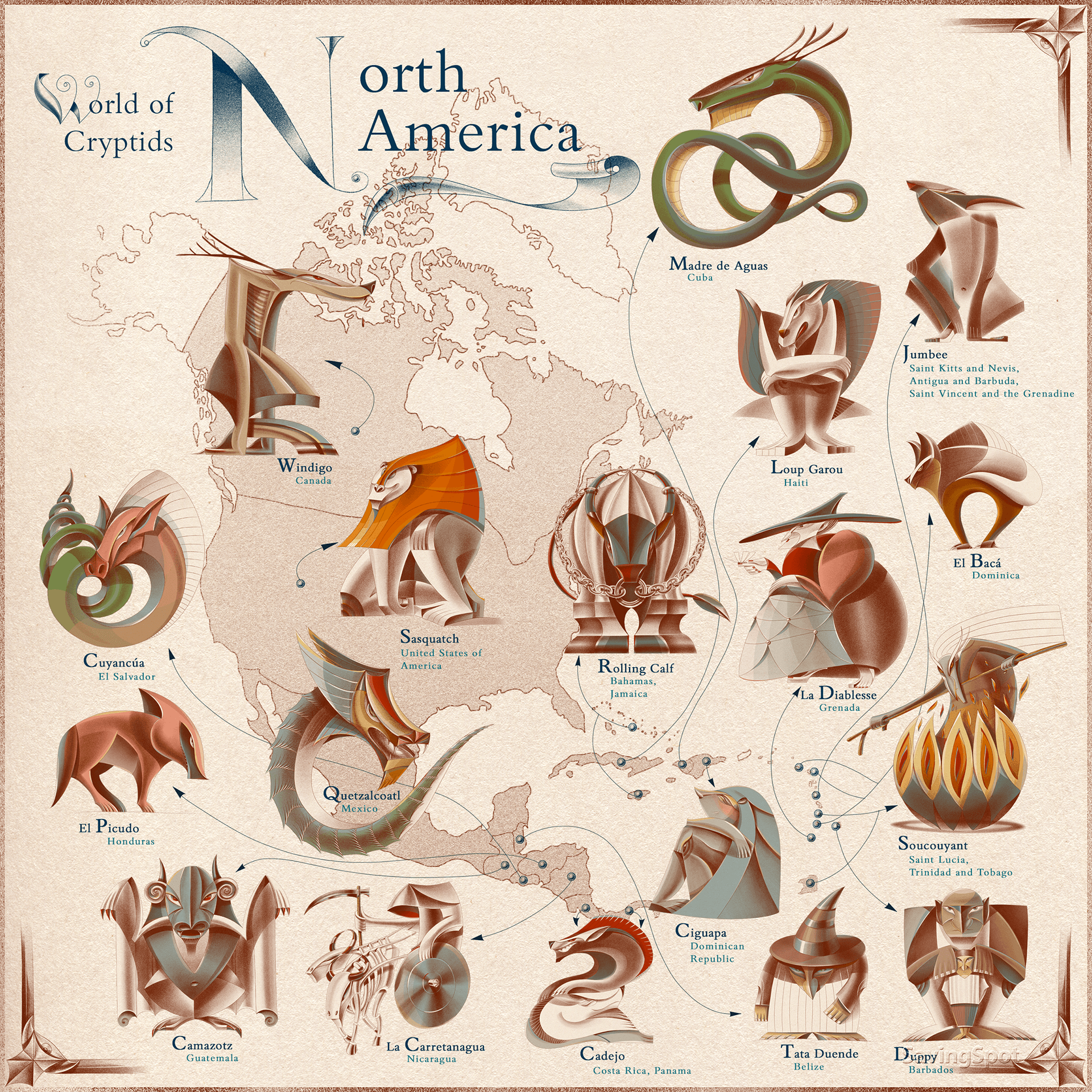 “The hairs which you recently delivered to the FBI Laboratory on behalf of The Bigfoot Information Center and Exhibition have been examined by transmitted and incident light microscopy,” wrote the assistant director of the FBI’s science and tech division in 1977. “It was concluded that the hairs are of deer family origin.” Bigfoot, aka Sasquatch (from the Salish word “se’sxac” or “wild men”), has eluded capture for over two centuries – helped by the occasional hoax to keep cryptozoologists and the FBI off the scent.

Nicaragua’s signature cryptid is literally death on wheels. La Carretanagua is an ox-cart driven by a skeleton and pulled by ghostly steers. The myth probably emerged from the plundering of native villages by Spanish colonists in the 16th century.

To get a closer look at each North American cryptid, check out the gallery below: 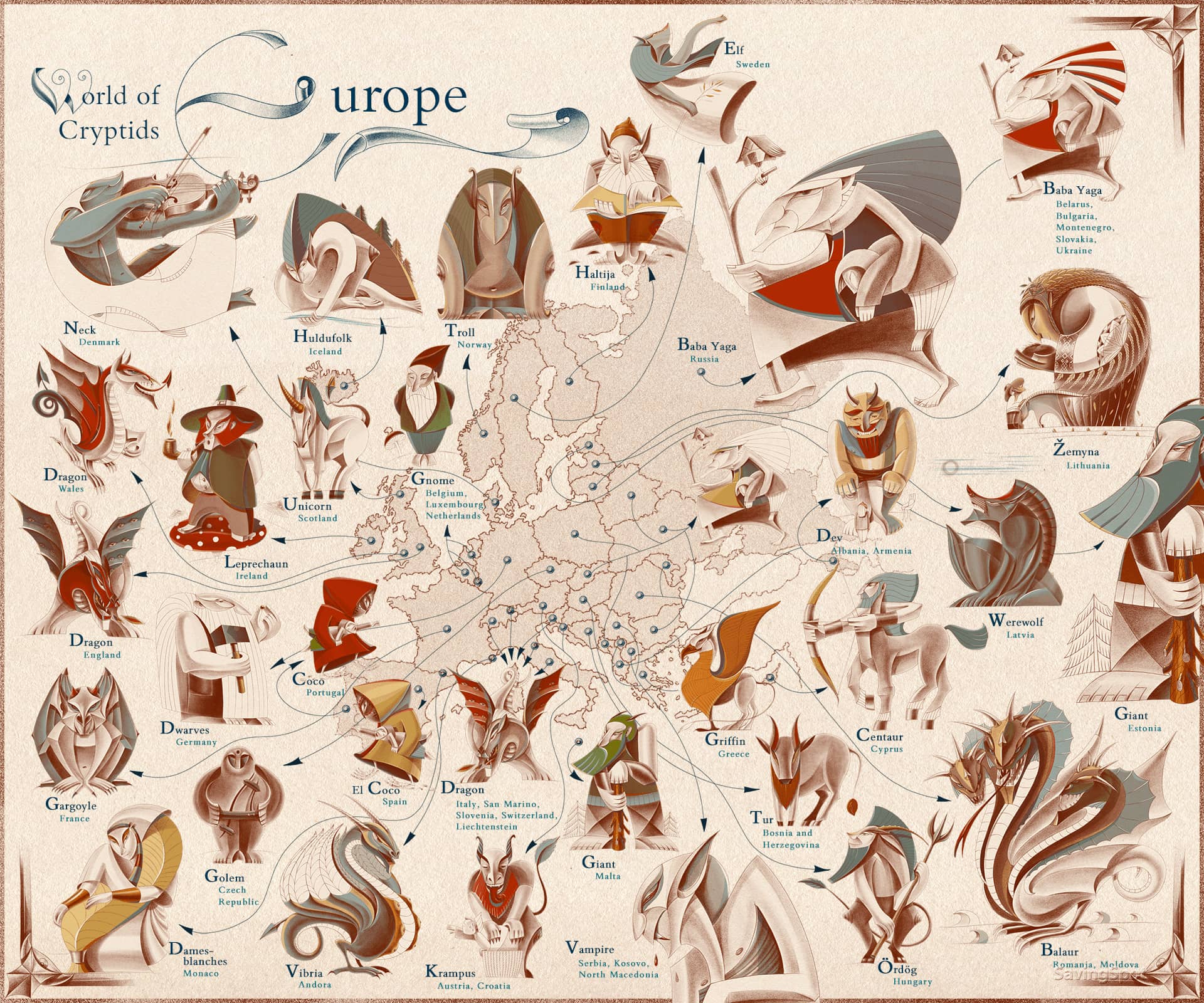 The dragon is the most-searched cryptid in England, Wales, Switzerland, Liechtenstein, San Marino, and Italy. The Welsh dragon even features on the national flag. This dragon was said to have been discovered at an underground lake beneath the Dinas Emrys hill in the 5th century. In 1945, a lake and a fortress dating to the 5th century were indeed found during excavation work at the hill.

Bosnia’s Tur, a giant bull, lives underground on the head of a giant fish who swims an endless sea. The bull needs only twitch his ear to cause an earthquake up above. Thankfully, Allah also created a fly to buzz around Tur’s head, frightening the bull into keeping still.

Want to get fully acquainted with each European cryptid? Have a look at the gallery below: 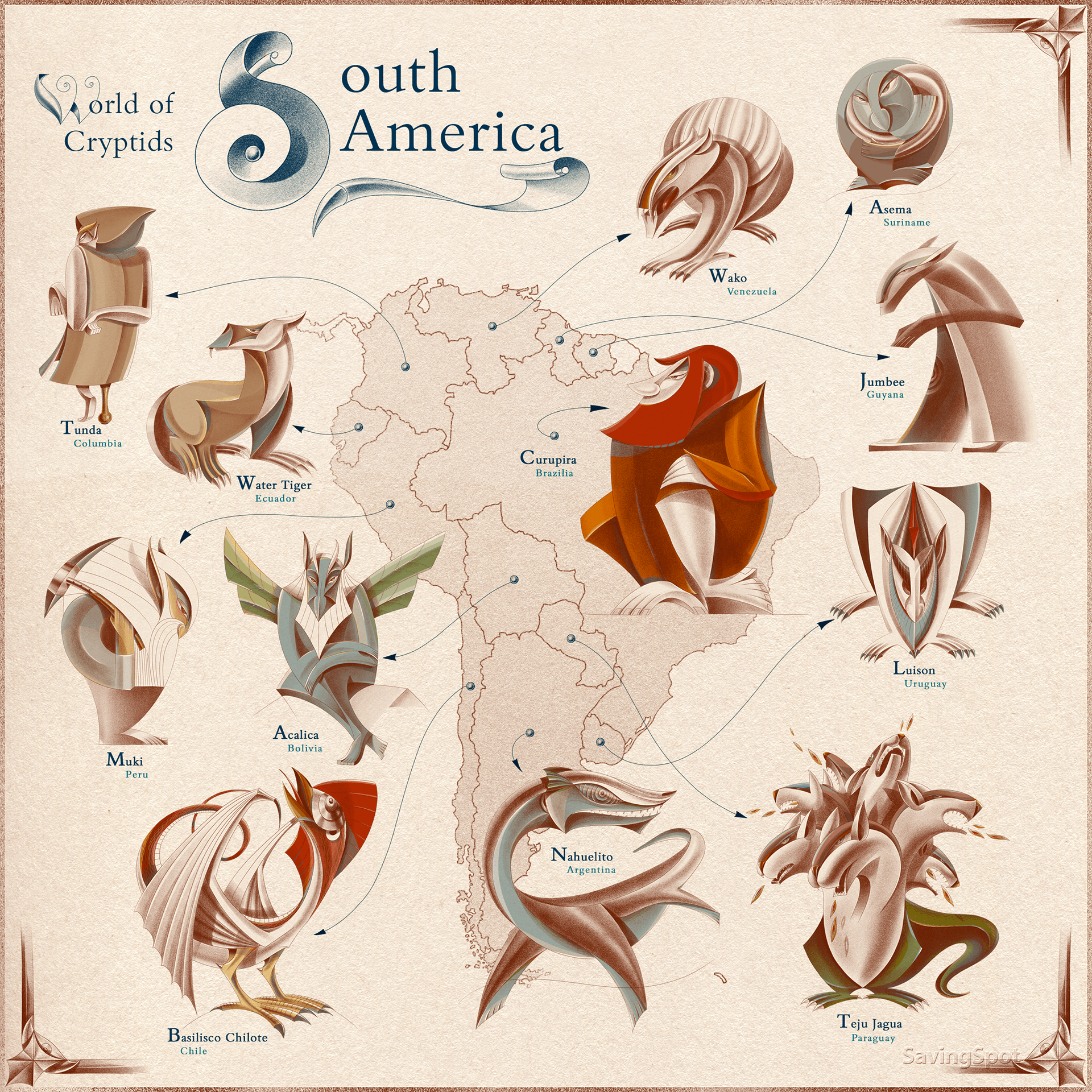 La Tunda is Colombia’s most popular cryptid, even though this one-legged hag’s special move is to fart on seafood and offer it to her prey. Her victims are unfaithful men and naughty children, who La Tunda lures by shapeshifting to resemble their lover or mother. The only way to spot her is to check her legs: the missing one has been replaced by a molinillo, or wooden spoon.

Paraguay boasts a lizard with seven dog heads for its most famous mythical creature. Teju Jagua is the cursed offspring of an evil spirit and a mortal woman. Thankfully, part of his curse is to be mostly harmless. While Teju Jagua’s eyes can shoot fire, he diets on fruit and honey rather than roasted human flesh. Good boy!

For a more up close and personal look with each South American cryptid, see the gallery below: 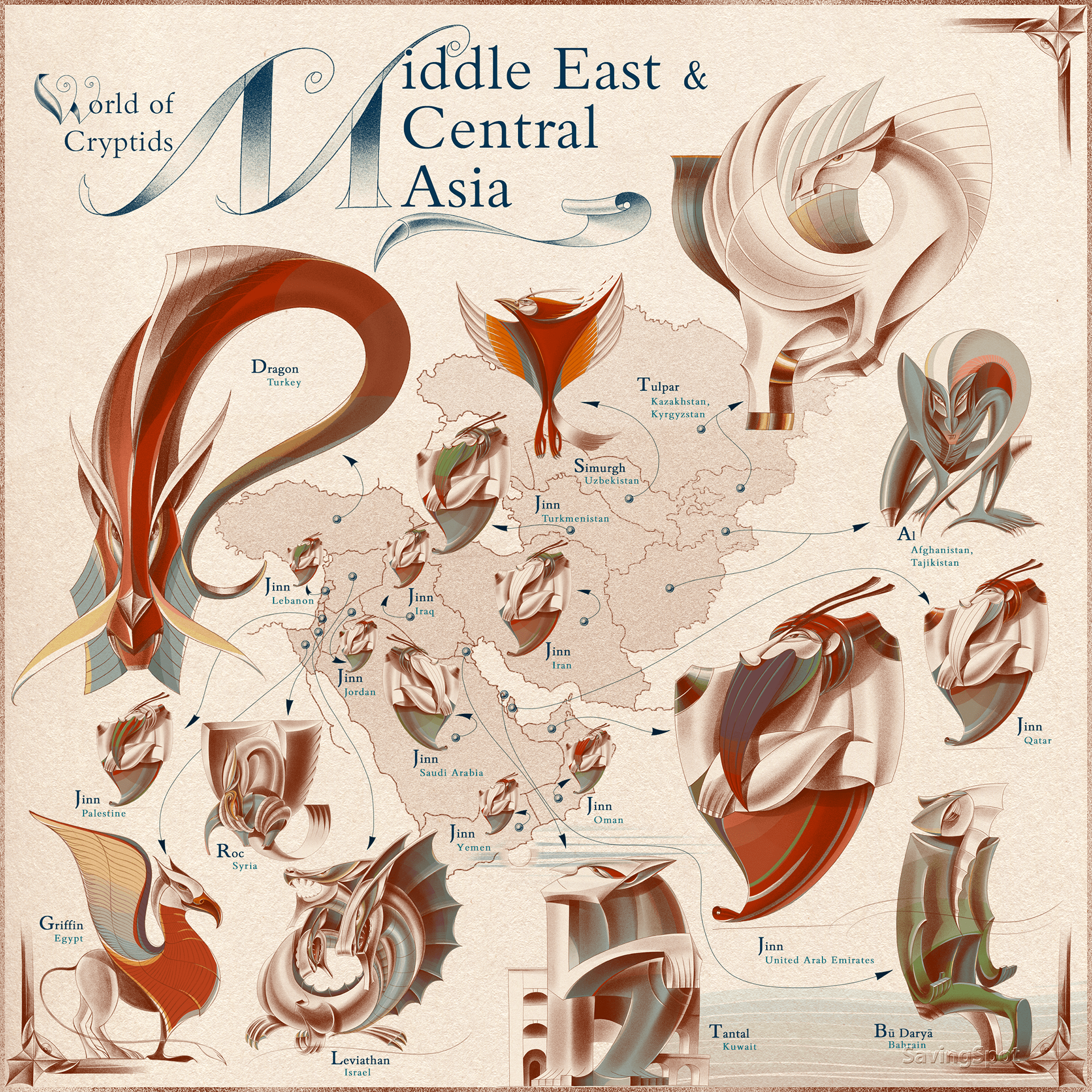 Jinn are notorious across this region. Known more commonly in the west as genies, jinn occupy inanimate objects and take on human or animal form to create magic and mischief. Most famously, they grant wishes only to deliver unexpected results. You are most likely to encounter a jinni in Iran, Jordan, or Iraq, and the creature is the most-searched in half of the countries in this region.

Bu Darya, a mythical creature of Bahrain, is one such jinn in a different form. This ‘lord of the sea’ (also known as the ‘sea devil’) is a giant merman who sneaks onto ships at night to kidnap sailors to eat. Bu Darya is also known to imitate the cries of distressed sailors or women to lure his prey.

To see each Middle Eastern & Central Asian cryptid in more detail, view the gallery below: 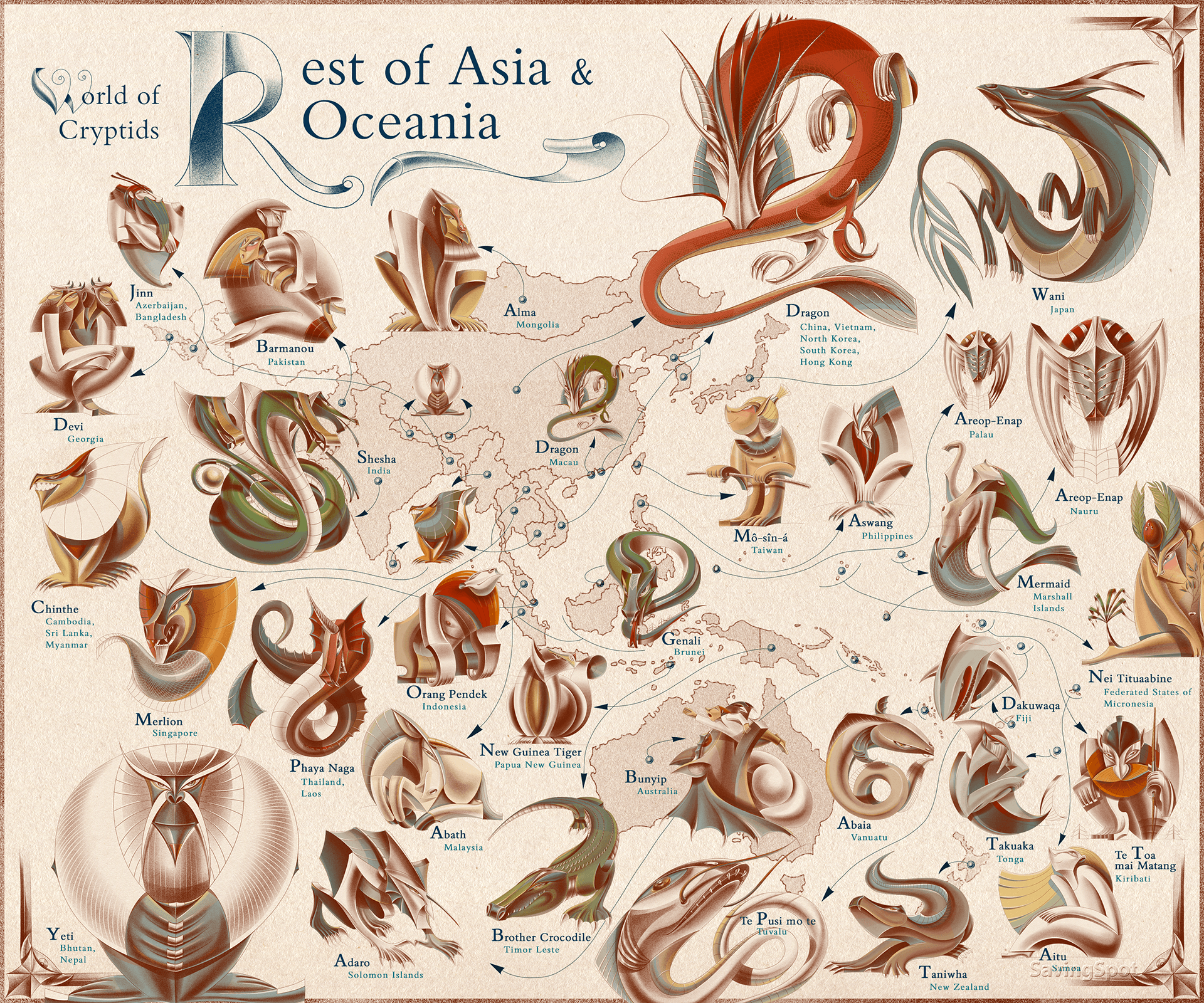 Naturally, the island nations of Oceania are beset by aquatic cryptids such as mermaids, shark gods, and serpents. The Adaro are mermen who haunt the waters around the Solomon Islands. An adaro has a swordfish-style spear growing from his head, but attacks by flinging poisonous flying fish at victims’ necks. Oh yeah, and the Adaro travel to the sun and back along rainbows.

Georgia’s most-wanted is the devi. These hairy, horned ogres have multiple heads – and the more heads a devi boasts, the stronger he is. A devi’s heads will grow back if you manage to chop any off, so it is recommended to defend against him with guile rather than violence.

For a detailed face to face look at each cryptid of Asia & Oceania, check out the gallery below: 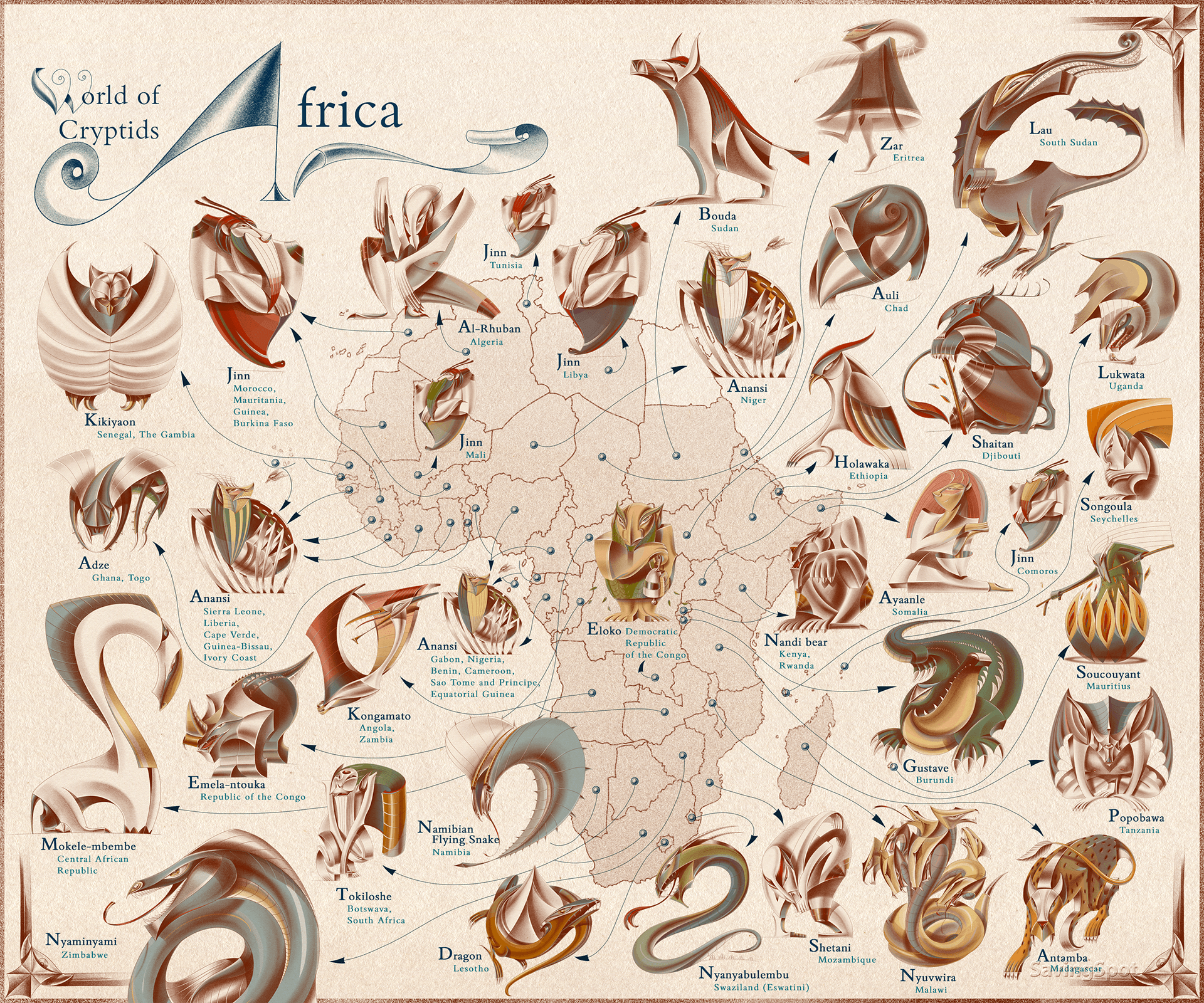 The Namibian Flying Snake has everything you want from a cryptid: slitheriness, up to 25 feet long, 30-foot wingspan, bioluminescent crest, horns, an inflatable neck, and a ferocious roar. And it smells like tar. The creature has been witnessed in the Karas Region since the 1940s, where it feeds on livestock and frightens farmers.

“There are no bears in Africa,” stated a 1961 article in Boys’ Life, “yet men keep seeing this huge, mysterious beast in the jungle.” The Nandi bear is a famous beast of Kenya and Rwanda. This upright, nocturnal creature has thick, red hair and is known for scalping those who startle it. But the creature has also been blamed for the occasional crushed skull.

Want to get to know these African cryptids in more detail? Check out the gallery below:

Fantastic Beasts and Where They’ll Find You

Some of the mythical creatures in our study are clearly the result of some imaginative myth-making. Others may be misidentified or as-yet-unidentified animals that very closely obey known physical laws. In each case, something sparked these cryptid tales that captivate (and terrorize) audiences in every country around the world.

Meanwhile, in the woods or below the surface of the water, whatever really ate those children or appeared in the background of an innocent holiday photo may not be very different from what the people imagine.

For each country, we compiled a long list of famous mythical creatures using sources such as Heather Frigiola’s Monsters and Mythical Creatures from around the World as well as Wikipedia and numerous independent sites.

To determine which mythical creatures from the long list were the most popular, we ranked them by total search results on Google, using the search terms [Country] + [Mythical Creature].

The results showed that numerous countries share the same mythical creature. In these instances, we added additional details that could help to distinguish them. For example, both England and China have ‘dragon’ as the most popular creature, but an English dragon has wings and a more lizard-like appearance, whereas a Chinese dragon does not have wings and has a more snake-like appearance.

For the full research behind this project, have a look here: bit.ly/WorldOfCryptids.