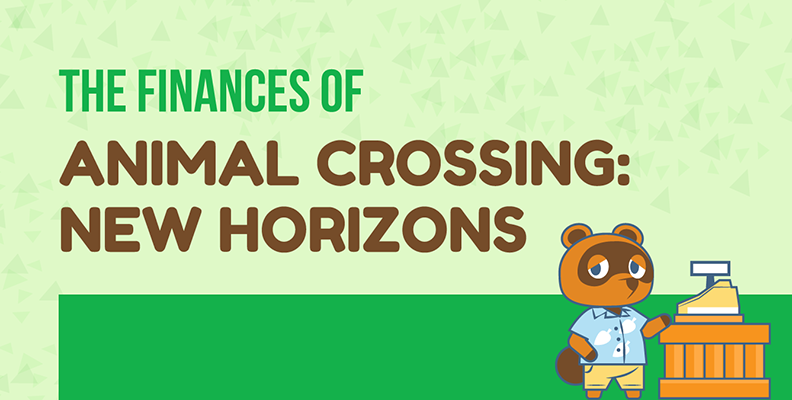 Is Animal Crossing: New Horizons a) an easygoing ‘life simulation’ where the best things come to those who wait? or b) a hard-nosed ‘capitalism simulator’ where there’s a buck (or a bell) to be made if you’re a sharp investor?

In the hit video game of 2020, you play an adorable human who moves to an island to build a home and a community of adorable animal-people. The tranquil gameplay is a welcome escape from the trials of the real world right now: a better-than-real oasis “full of park-bench moments” where sickness is, well, adorable, and until recently there were no politicians.

But constructing a pixel-perfect home is going to take forever if you play the easygoing way. Many game items that players desire for their ‘personal island paradise’ are usually only available by chance or by waiting. Impatient players have started heading to Nookazon, the independent market of Animal Crossing, instead.

On Nookazon, you can buy any item you desire, but usually for way more than its official value. So, if you want to go shopping, you need to earn extra Nook Miles. The quickest way to do this? Buy up some cheap items and resell them above their official value on Nookazon.

CashNetUSA has cross-referenced prices from New Horizons and Nookazon to identify the 20 Animal Crossing items that have the highest return on investment (ROI). Hope you’ve got deep pockets because you’re about to get filthy rich — in an adorable sort of way.

These are the trinkets of New Horizons that have the highest return on investment (ROI). Click the buttons to sort and categorize, and check the legend at the top for the meaning of the icons.

The most profitable New Horizons items are generally rare or difficult to find. For example, the handmade cape goes for 6000x the regular price on the black market. This blue stripy garment, tied with a red ribbon, was released as a limited edition for International Children’s Day and can no longer be bought the conventional way.

Likewise, the great statue has a resale profit of 3 — 4 million bells. Why? You have to do a whole lot of philanthropy in the game to get an introduction to the art dealer, Jolly Redd. So why is the flimsy net  — so easily found or built — the most expensive and profitable item on Nookazon? The Animal Crossing fandom’s working theory: it’s a joke.

Animal Crossing Items with the Highest and Lowest Resale Profits

Our second chart shows the return on investment for most and least profitable black market items. You can specify the category you want to examine using the menu on the right and hover over a data point to get more info about each item.

Apparently, the flimsy fishing rod doesn’t have the same comic value as the 5m bell flimsy net. The fishing rod is the worst investment you can make if you plan to make a profit since it retains only 0.3x its original value when you resell it on Nookazon.

Just like in real life, if you have enough money to buy art, you can cash in by selling it again. Nine of the 20 most profitable items are art pieces. Art tends to cost several thousand bells at source but ascends into the millions on Nookazon. In fact, eight of the 10 priciest Nookazon items are art – mostly statues, although each half of the wild painting fetches upwards of 3.5m bells.

Good Things Come to Those Who Hustle

So is Animal Crossing: New Horizons more like Mountain or Monopoly? An ambient video game or the thrill of exploiting adorable consumers? According to Nookazon founder Daniel Luu, it’s somewhere in between: “I think buying and selling is so popular because people want to make their dream homes,” says Luu.

Sure, it’s nice to sit and wait for your island paradise to take shape — but the world is doing a lot of sitting around locked down at home in 2020. Who’s got time to wait around for a valiant statue or wild painting when there’s nothing better to do?

The data for this project was taken from two main sources. The list of in-game items and prices were sourced from the community Data Spreadsheet for Animal Crossing New Horizons, while their resale values were looked up on Nookazon.com.

Items that appear in the Data Spreadsheet but were not available on Nookazon were filtered out. Variations of the same item, i.e., difference in colors, were deemed the same item. The final list contains 2,638 items.

The data we used to make these interactives was collected at the end of July 2020 and can be viewed in full here: bit.ly/FinancesOfAnimalCrossing.