Home » Which Countries Pay the Most and Least for Apple Music? 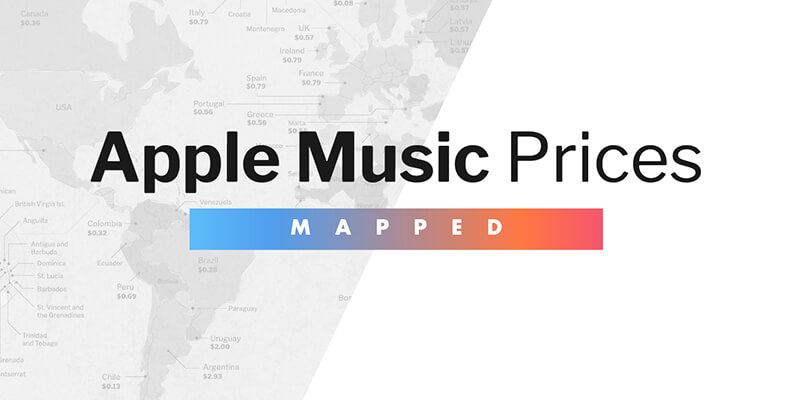 Which Countries Pay the Most and Least for Apple Music?

Nine out of ten internet-faring humans stream music on-demand. At the start of 2020, your streaming habits contributed to a $20bn industry, pumping in over half of the recording industry’s revenue. But not every market is created equally. For example, in some countries Apple Music costs consumers more than in others (especially if you take the average wage into account).

SavingSpot recently did the math on the relative costs of a Spotify subscription around the world. Today, we’re back with a breakdown of how much Apple Music costs, depending on where you live. We found the cost of Apple Music in every country where the service is available and compared this to local wages using the World Bank’s adjusted net national income per capita data series. We converted everything to American dollars so you can see the difference from place to place and created a series of maps to show who pays the most and least for access to the platform.

Apple Music has more tunes, better integration with your personal library, and better iPhone and HomePod compatibility, compared to Spotify. But does it give better value in your homeland? Scroll on to see who’s getting the best deal.

We worked out the average monthly income in every country where Apple Music is available and then calculated the subscription cost as a percentage of each paycheck. Warmer colors indicate you’d need a bigger chunk of your pay to get Apple Music. 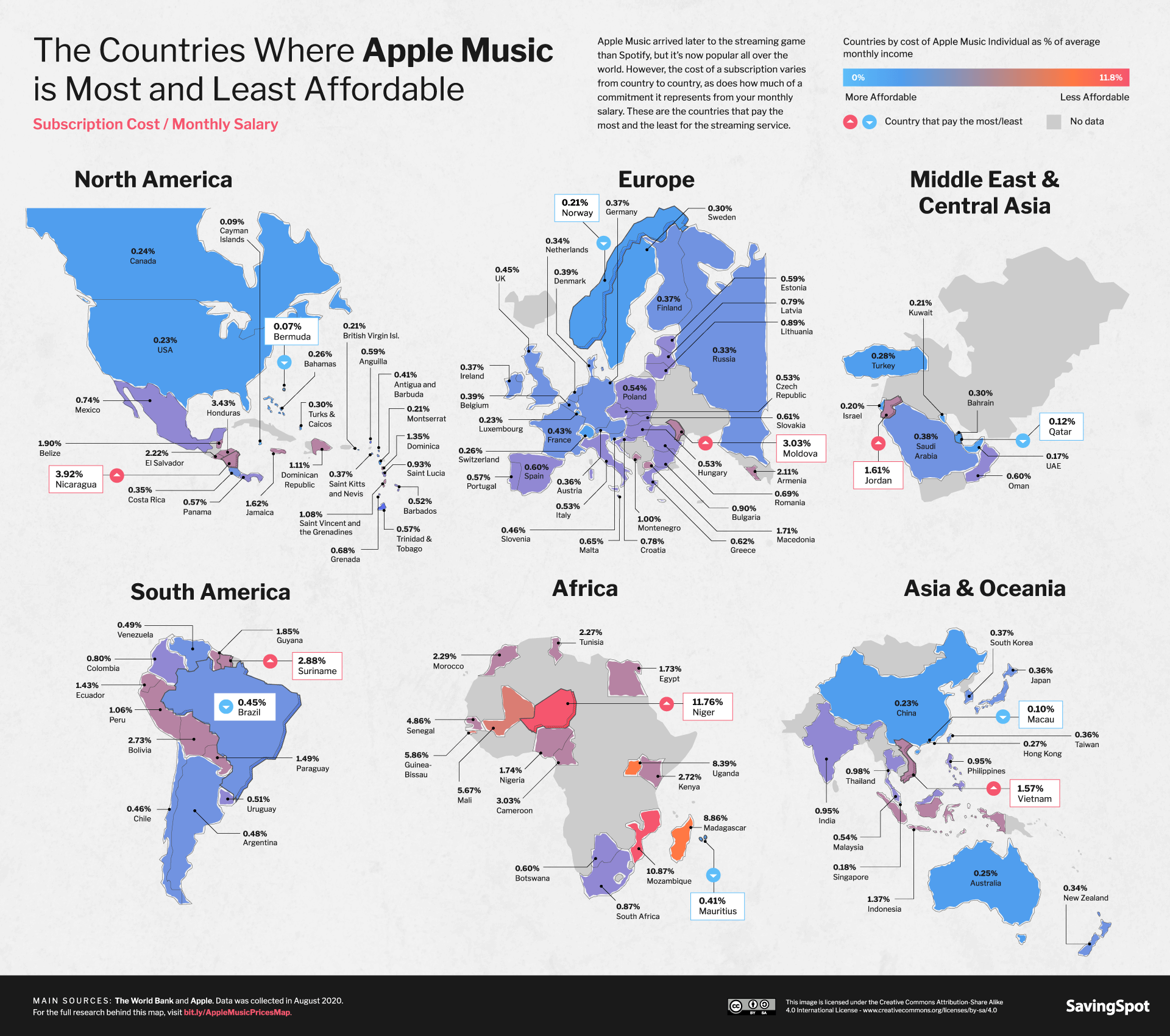 Living is expensive in Bermuda, for nearly everything except Apple Music. A bottle of wine costs 20 bucks; a one-bed city apartment can cost $2,700. Apple Music costs just $5.99/month, a drop in the warm, calm ocean of the average Bermudan’s $8,283.33 paycheck.

Only Norway and Switzerland have a higher cost of living. But even with their expensive Apple Music fees, Norway and Switzerland are the 9th and 17th best value Apple Music territories due to high wages. By comparison, Niger and Mozambique pay just $2.99 for their subscription. But this is still more than 10% of their monthly wage. Most of the worst-value Apple Music territories are in this situation – the service is expensive because of low wages rather than high prices.

The Cost of a Monthly Apple Music Subscription in Every Country

This map shows the cost of Apple Music in every country in absolute terms: what you actually pay. Countries with warmer colors have higher Apple Music fees. 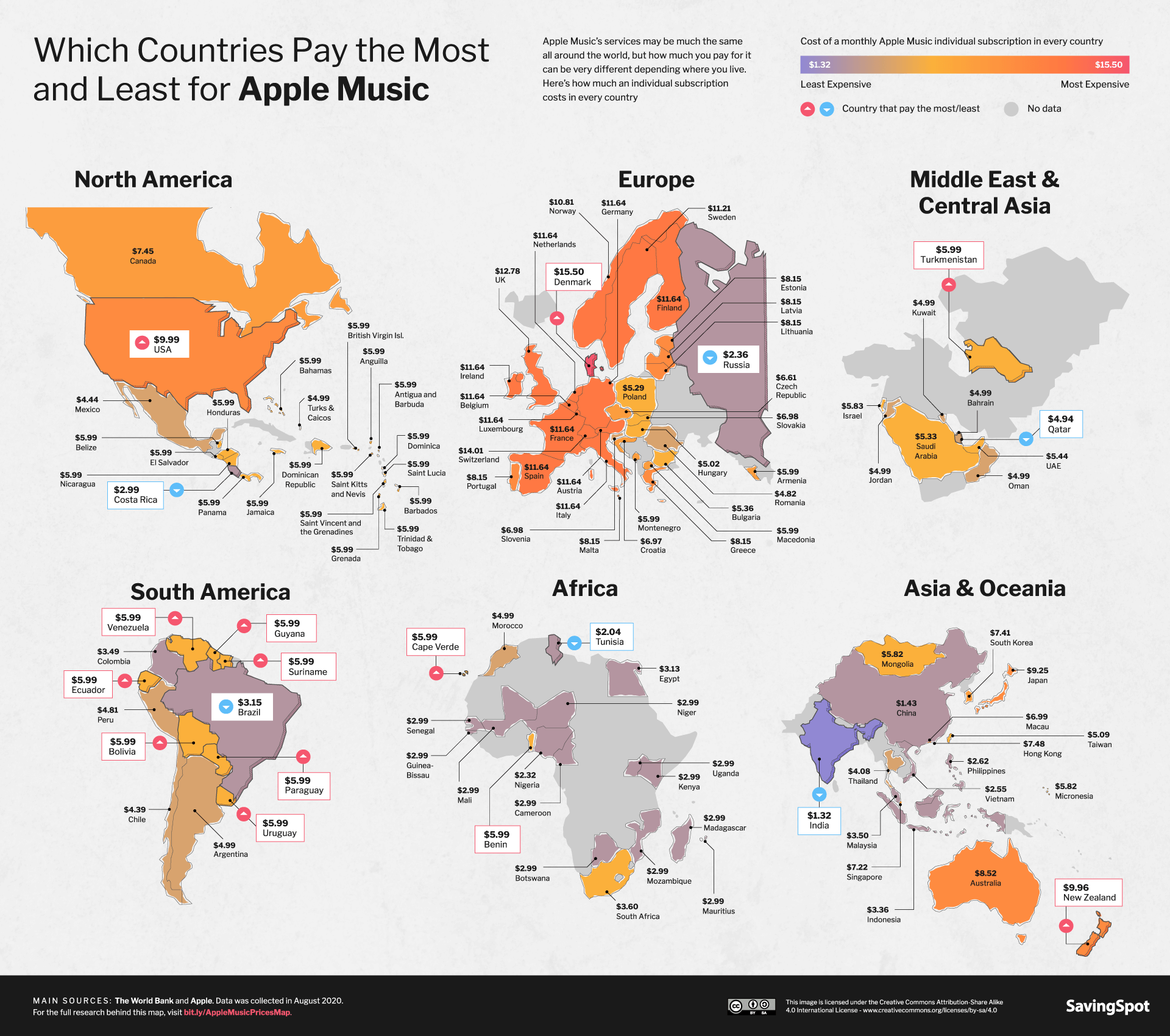 Asian and African countries generally enjoy lower fees for Apple Music, although not at a rate proportional to the lower wages of many countries. China and India – the world’s population giants -both pay less than a buck and a half for their subscription. With a consumer base of around 1.4bn people in each of these countries, it’s no wonder Apple wants to make an impact.

Apple Music saves its highest fees for Europe. Denmark and Switzerland pay ten times as much as China and India, but local wages top $4k and $5k respectively. The UK is the third most expensive but still gets good value against the average wage. However, it is important to note that the average wage in places like the UK, US, and South Africa is skewed by vast income inequality.

Bermuda and the Cayman Islands get the best deals for Apple Music thanks to a six-buck subscription and eye-watering paychecks that top $8k and $6k respectively. The US gets the fifth best deal. While $10/month may mean a lot to many Americans, the overall wealth of the nation drags the average pay up to $4,290.41. 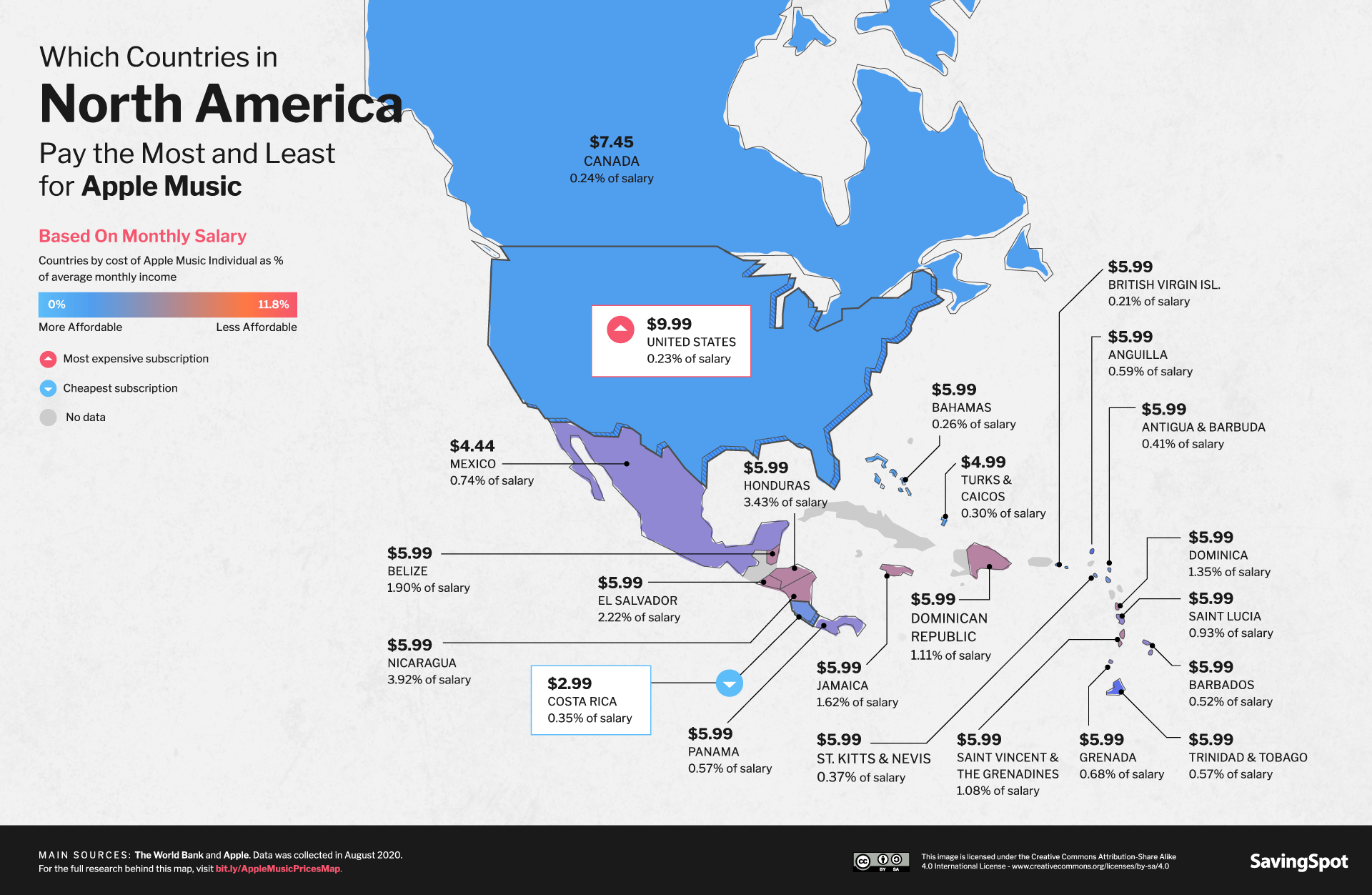 Central American countries get the roughest deal. Places such as Nicaragua, Honduras, and El Salvador pay the same as Bermuda and the Caymans, despite wages that barely top $200 or $300.

Apple Music costs between $5 and $12 across most of Europe. Again, the story is that the countries with the highest wages pay the smallest proportion for Apple Music, despite high tariffs. For example, Sweden – the home of Spotify – pays $11.21/month for the service, or 0.30% of the $3,763.25 average paycheck. 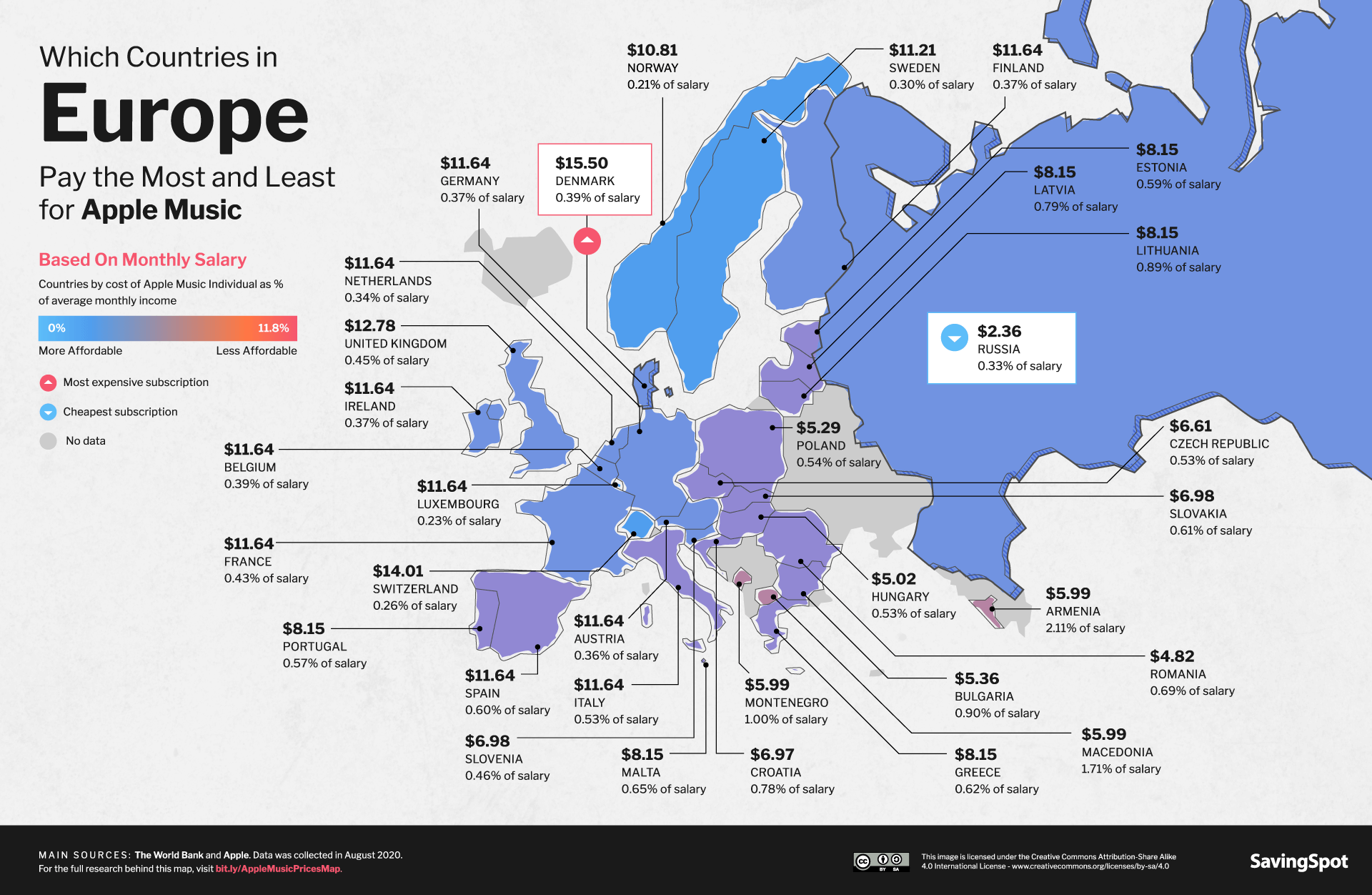 Parts of Eastern Europe and the Balkans spend the biggest part of their paycheck on Apple Music. Moldova has it toughest, with nearly 5% of a $191.86 income going to streaming. Russia is an outlier, with an average wage of $709.95 balancing against a subscription of just $2.36. This makes Russian Apple Music the fifth best value in Europe, thanks to a price war with Spotify.

Brazil is big. With a population of 211m, Apple Music offers Brazil the best value on the continent: a $3.15 subscription is equal to 0.45% of a $699.76 paycheck. But Chile, Argentina, and Venezuela aren’t far behind, all paying less than 0.5% of their income. 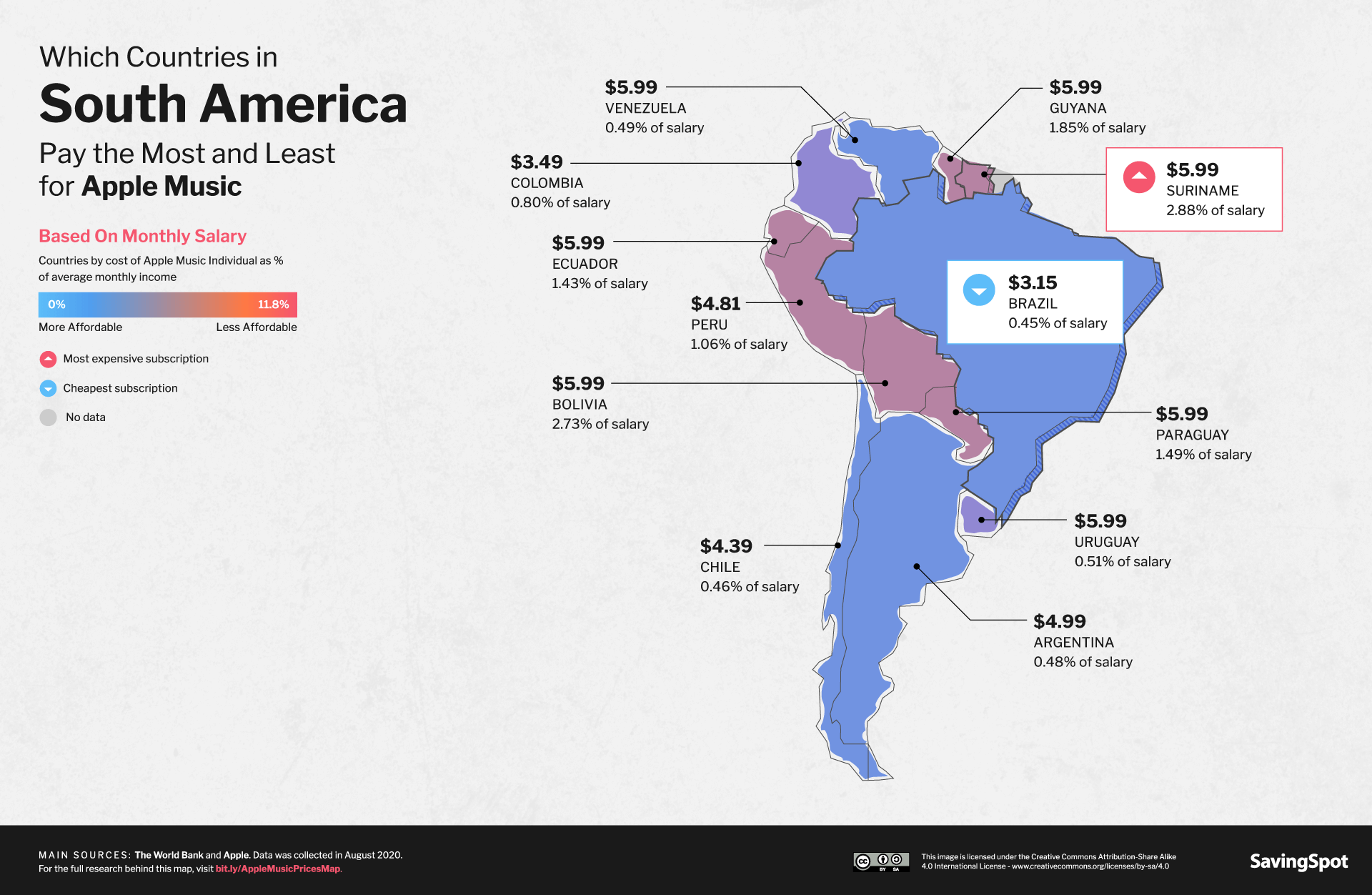 Suriname and Bolivia pay the most for Apple Music, compared to local wages. But smaller markets like these slip under the radar, allowing for local alternative streaming services to pick up the slack. For example, TrackDrip dropped in Suriname in 2019, offering a freemium service packed with Caribbean and Latin American tunes.

Apple Music is yet to launch in much of this region, but those countries with access get a pretty good deal. Qatar is top of the pile, paying just 0.12% of a $3,994.42 paycheck for a bargain $4.94 subscription. In fact, Qatar gets the fourth best value for Apple Music in the world. 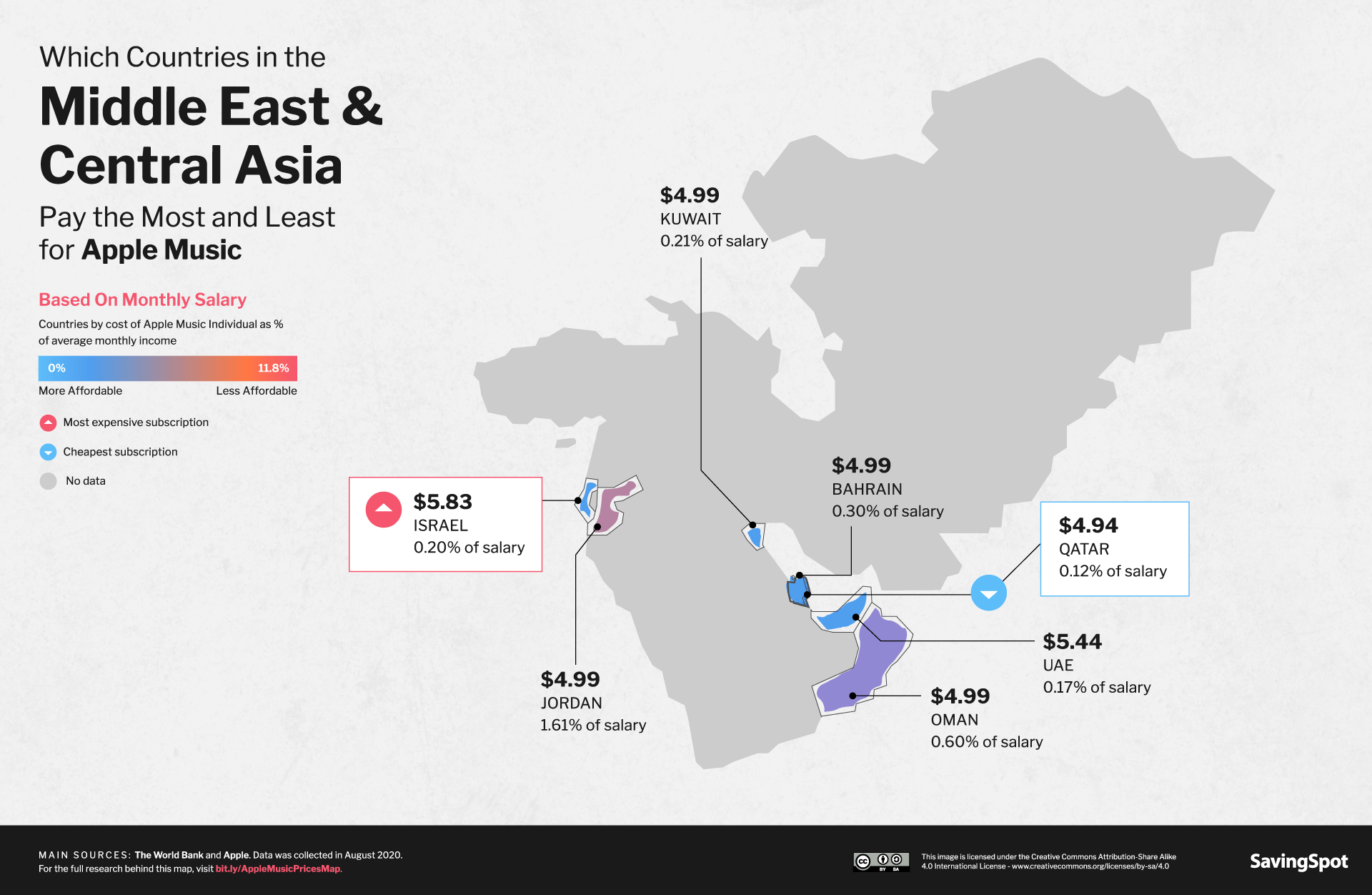 Turkey also gets good value for Apple Music, despite an average wage of $721. The monthly charge for streaming is kept at just $2.04, or 0.28%. Wages are even lower in Jordan ($309.23), but a five buck subscription means Jordanians must cough up 1.61% of their earnings to listen to music through Apple’s streaming service.

The Rest of Asia & Oceania

The outlook in this region is much the same: Apple Music is yet to appear in many of these markets, but where you find it, you find it affordable. Macau and Singapore get the best value due to high incomes, but China isn’t far behind. Apple Music maintains super-low subscription fees in China while the company struggles to make its mark in this notoriously competitive streaming market. 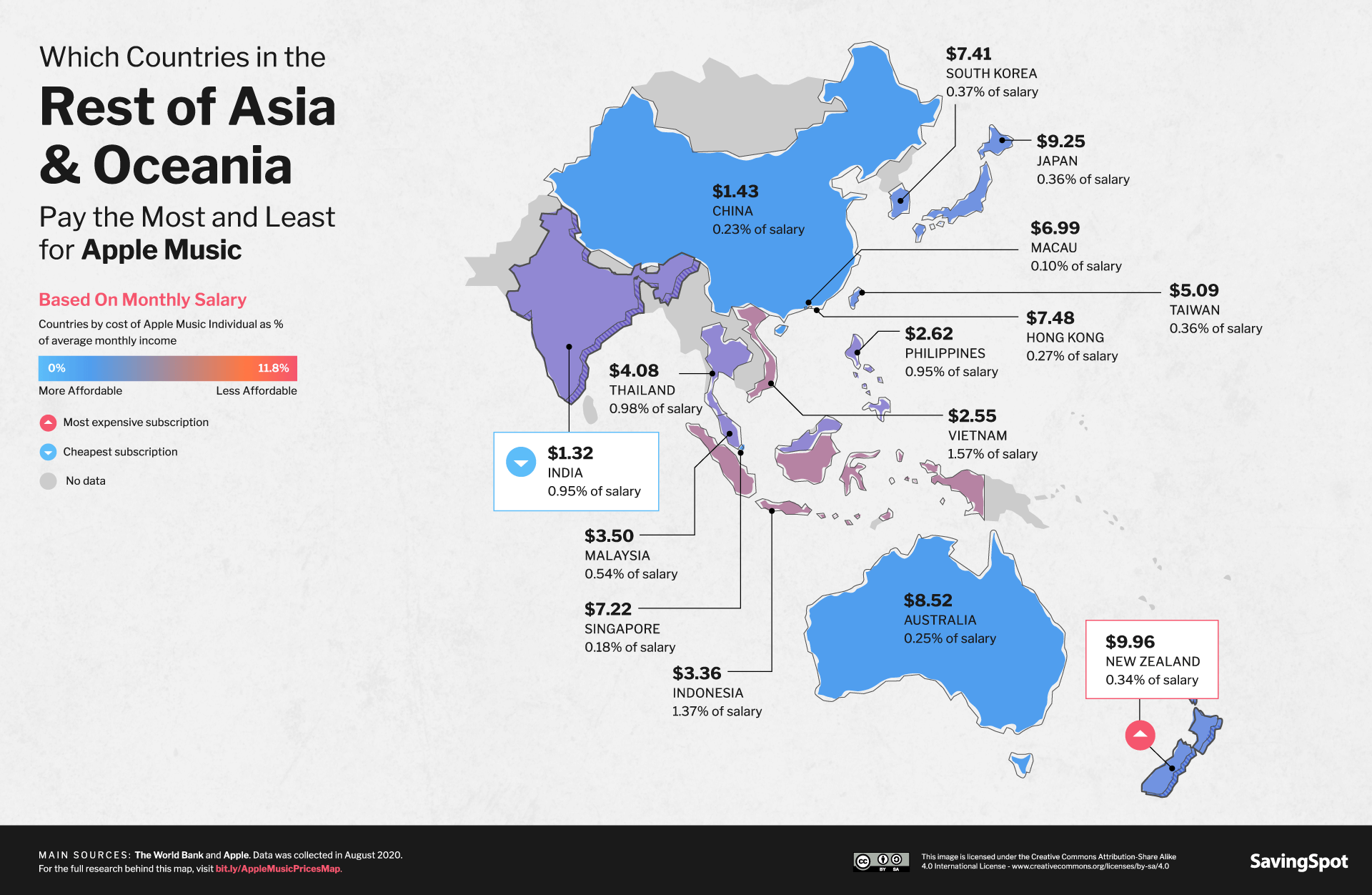 Indonesia and Vietnam pay the highest proportion of their wages for Apple Music, but with local subscriptions held at $3.36 and $2.55 respectively, it’s not a terrible deal. India has the lowest fees in the world ($1.32/month), but an average wage of $139.87 puts the country about midway up the global league table for value.

Africans get a raw deal with Apple Music. The world’s top five most expensive subscriptions relative to wages are in African countries: Guinea-Bissau, Uganda, Madagascar, Mozambique, and Niger. Nigerians, who get the worst value in the world, must pay 11.76% of a $25 paycheck for a five-buck subscription. However, as the world’s poorest country, with a life expectancy of 60 years and average school attendance of just 2 years, Apple Music might not be a priority. 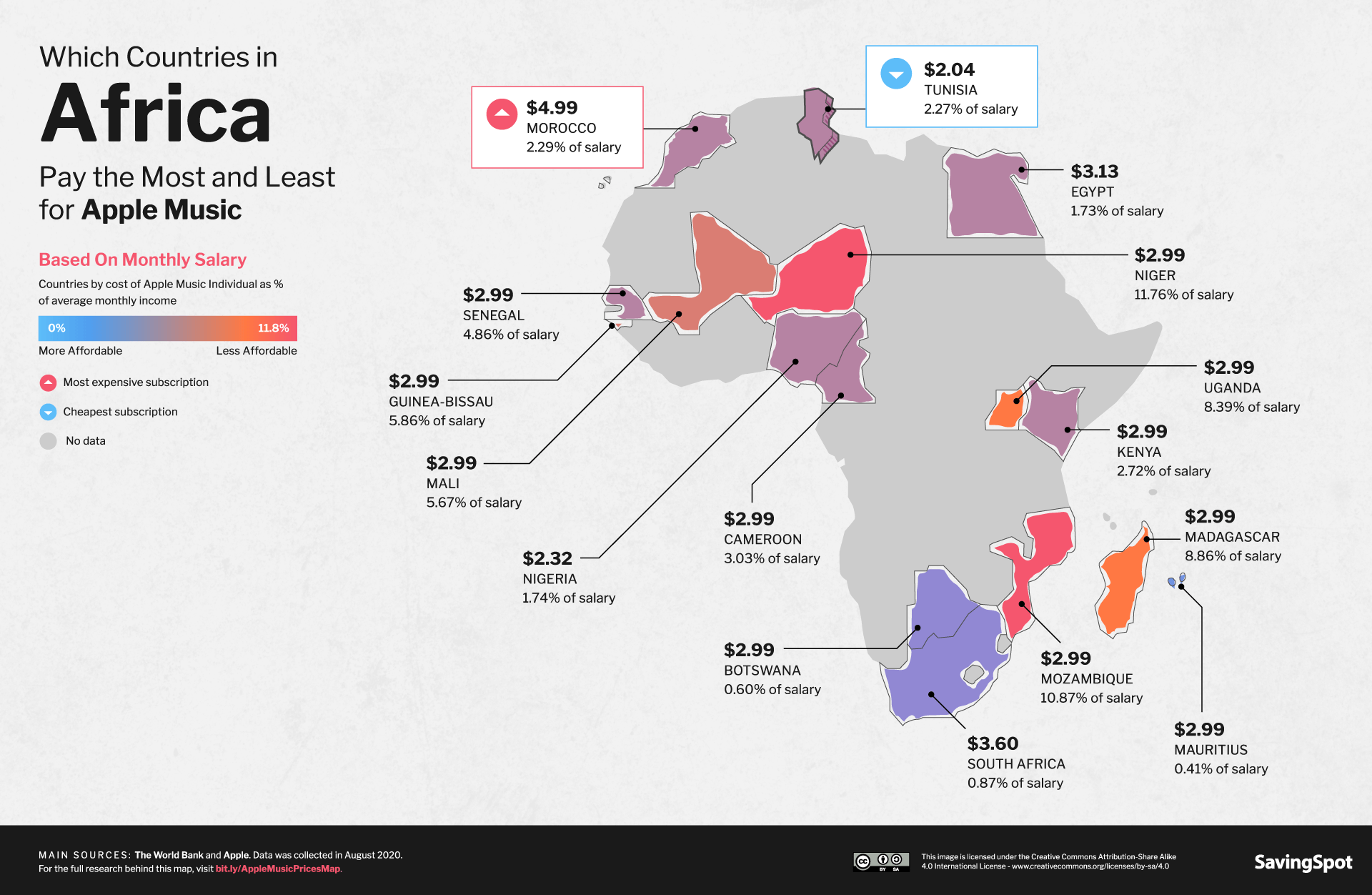 Mauritius, Botswana, and South Africa all get relatively good value for Apple Music. The service is kept at around three bucks per month here, amid some of the highest wages on the continent.

Is Apple Music or Spotify Cheaper Where You Live?

It’s showdown time! Red countries are where Apple Music is cheaper than Spotify. In blue countries, Spotify is cheaper. Check the figures beside each country to see the price difference for that locale. 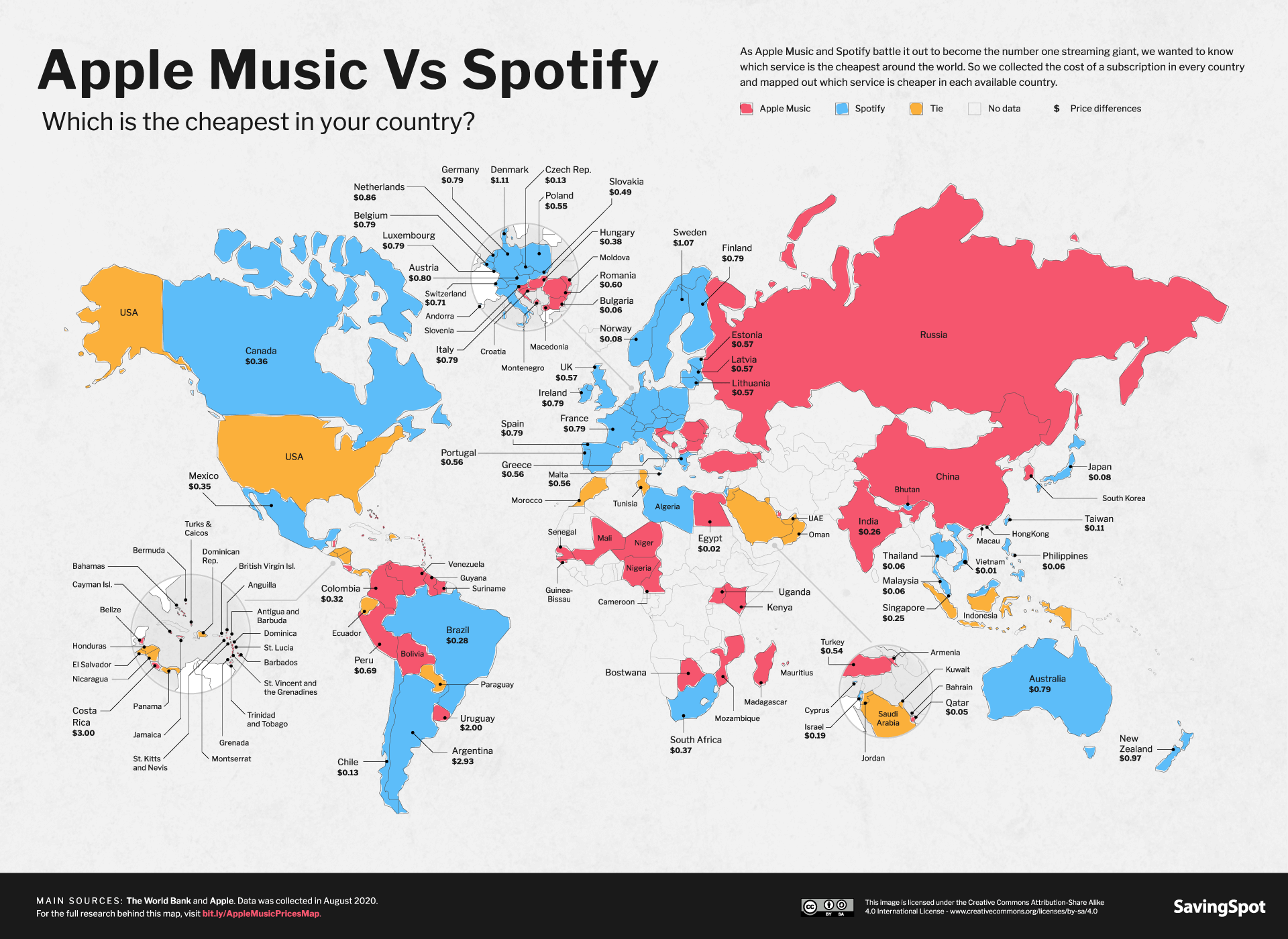 Spotify has become a generic term for ‘streaming,’ while the Apple brand still conjures images of glowing devices and computing as a lifestyle. But while Spotify has twice as many paid subscribers compared to Apple Music, the latter is available cheaper in more places, including the potentially lucrative markets of China and Russia.

However, there are only five countries where the price difference between the streaming services is more than a dollar. In most places, a price comparison between Apple Music and Spotify is less pertinent than weighing up each platform’s respective strengths. However, in Uruguay and Costa Rica, choosing Apple can save you $2-3 per month, and vice versa in Argentina, where Spotify is $2.93 cheaper than Apple Music.

60 Million Songs in Your Pocket

Apple music tech has come a long way: from “1,000 songs in your pocket” to 60 million songs on tap in two decades. And while you’ll need to bring your own device with you, $5-10/month isn’t a bad deal in countries where the average monthly paycheck is four figures. (You might disagree if you’re a musician – Apple Music cuts artists a better deal than Spotify, but it still isn’t great.)

To find out the precise data, we gathered for your country and others, be sure to delve into our table below. What will you listen to while you’re geeking out on the stats?

In order to make these visualizations, we used World Bank’s “Adjusted net national income per capita” data series, which indicates the typical average income of a person in a given country. We took the figures and divided them by 12 to estimate average monthly income.

Next, we used the Availability of Apple Media Services page to identify which countries have access to Apple Music and recorded the prices for Individual, Family, and Student subscriptions where each was available. Then we calculated those prices as a percentage of the average monthly salary in each country.

All prices were recorded in August 2020 and were converted to USD using the exchange rate available through xe.com’s Currency Converter.

The research behind these visuals can be seen in full at bit.ly/AppleMusicPricesMap.