Home » The Motto of Every US State, Mapped 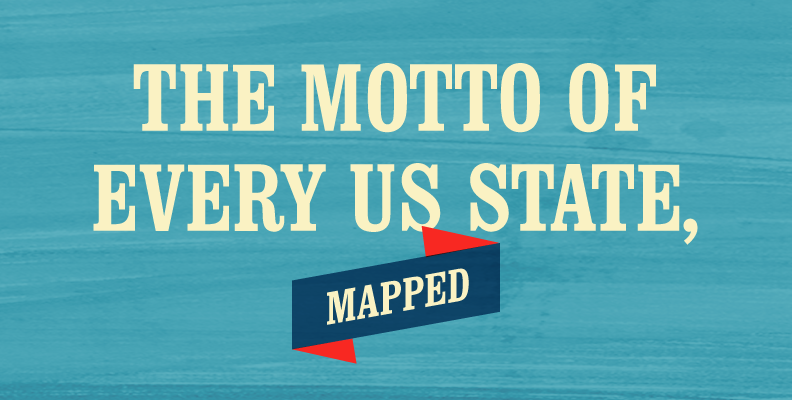 The Motto of Every US State, Mapped

In God We Trust: so goes the motto for the United States of America, and also the state of Florida. But within that mission statement for the US as a whole, each state has its own unifying pledge to live up to as we work together for the common good.

That’s fifty rallying cries in eight different languages! Twenty in Latin, twenty-four in English, and the rest in French, Spanish, Italian, Greek, Hawaiian, and Chinook. Some of them have some pretty strange things to say about how their citizens should live their lives.

Washington State is one of the two American states to have a motto in a native language. Although it’s never been made official, Washington’s motto is the Chinook phrase “Al-ki” or “Alki,” meaning “bye and bye.” A more modern translation would be “Into the Future.”

The motto was used in the 1850s to indicate the forward-looking nature of the settlers of the west coast, who had originally named their settlement New York – only to see the east coast New York develop much faster. There’s something very philosophical about being future-oriented without needing to be in a hurry!

The motto of Hawai’i is also in the local language: “Ua mau ke ea o ka ʻāina i ka pono.” King Kamehameha III first used this phrase on July 31, 1843, after the Kingdom of Hawaiʻi was liberated from the British. Today we understand the motto to mean “The Life of the Land is Perpetuated in Righteousness.”

But the Hawaiian language is a complicated thing! The word ‘pono’ can also mean universal balance and harmony. In this case, the motto is interpreted as “The life or sovereignty of the land is maintained in harmony.” It’s a motto that calls on ancient wisdom: a more holistic way for Americans to live their lives and do the right thing through the comings and goings of invaders.

Stirring stuff. And there’s one for every state. To celebrate this diversity and the traditions of the United States, we’ve gathered every state motto into a fine new map. Do you know yours? 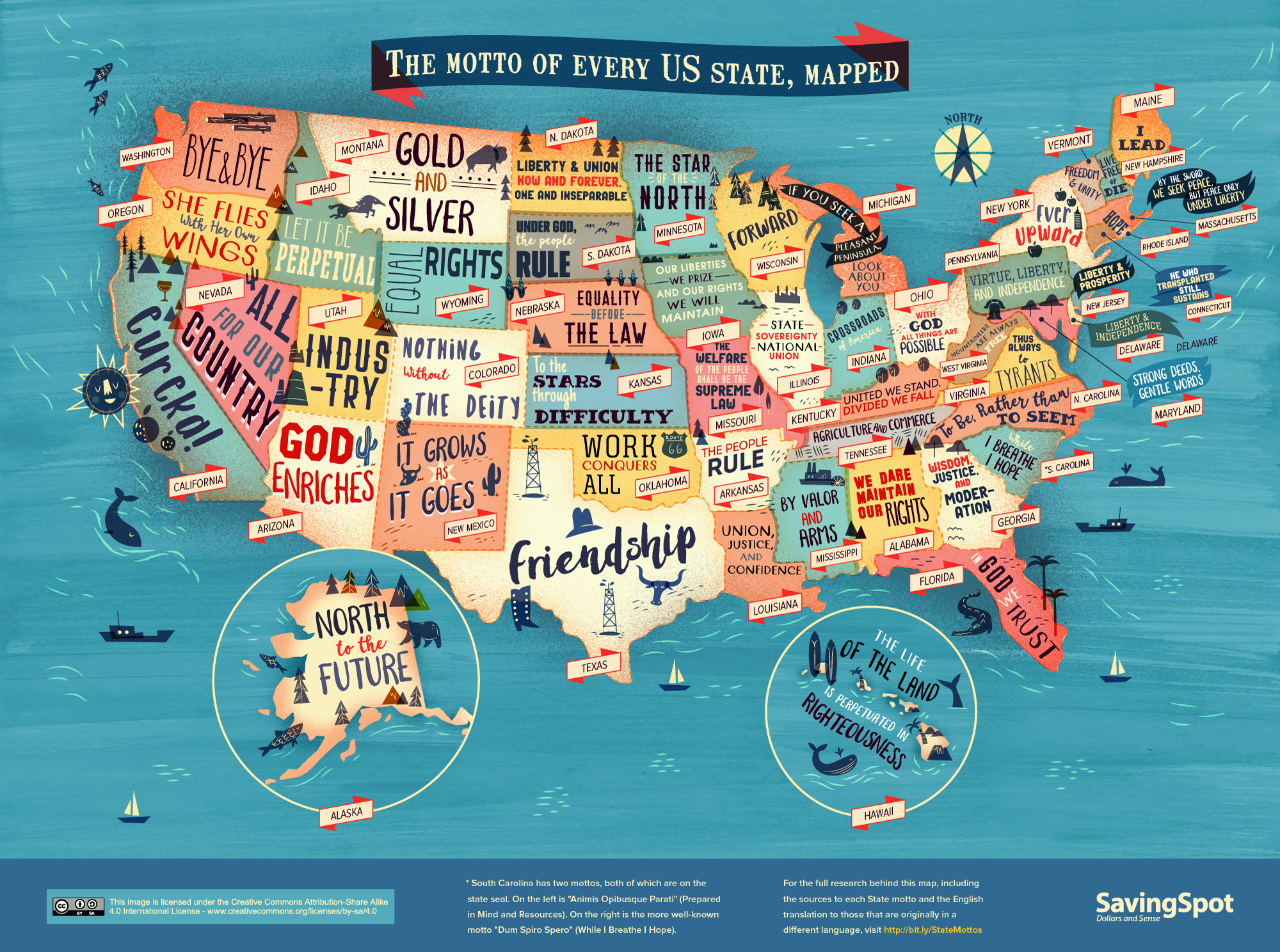 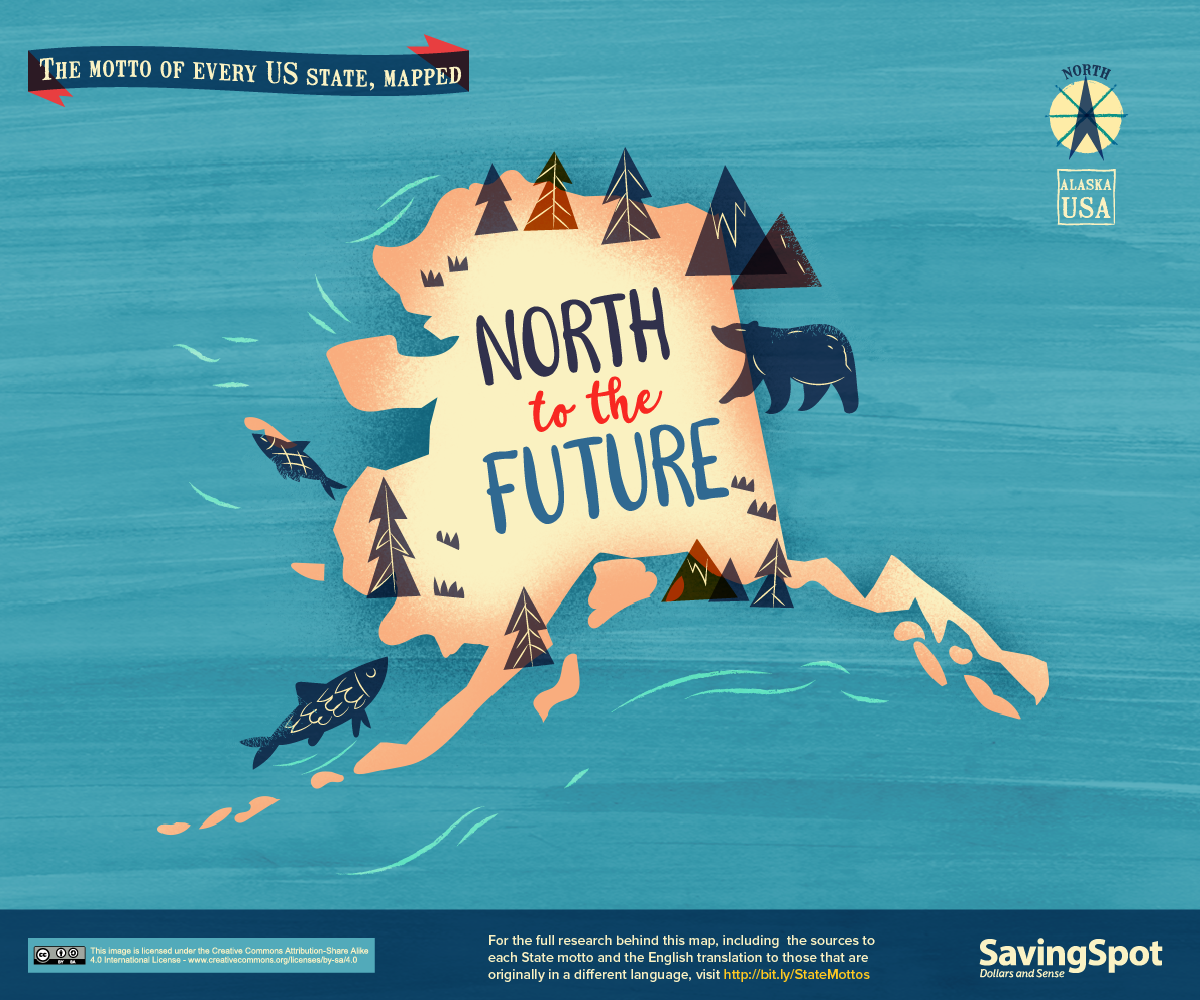 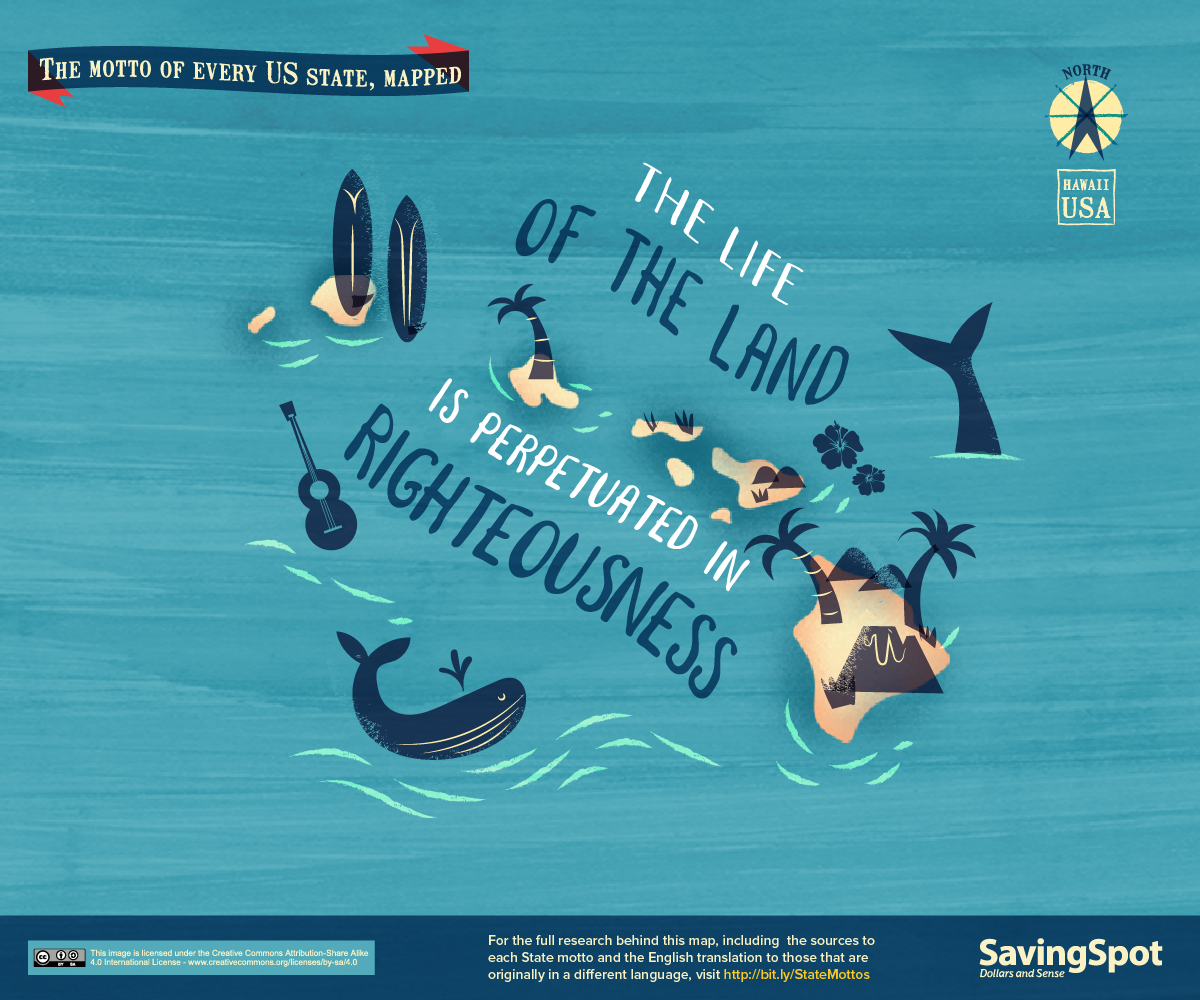 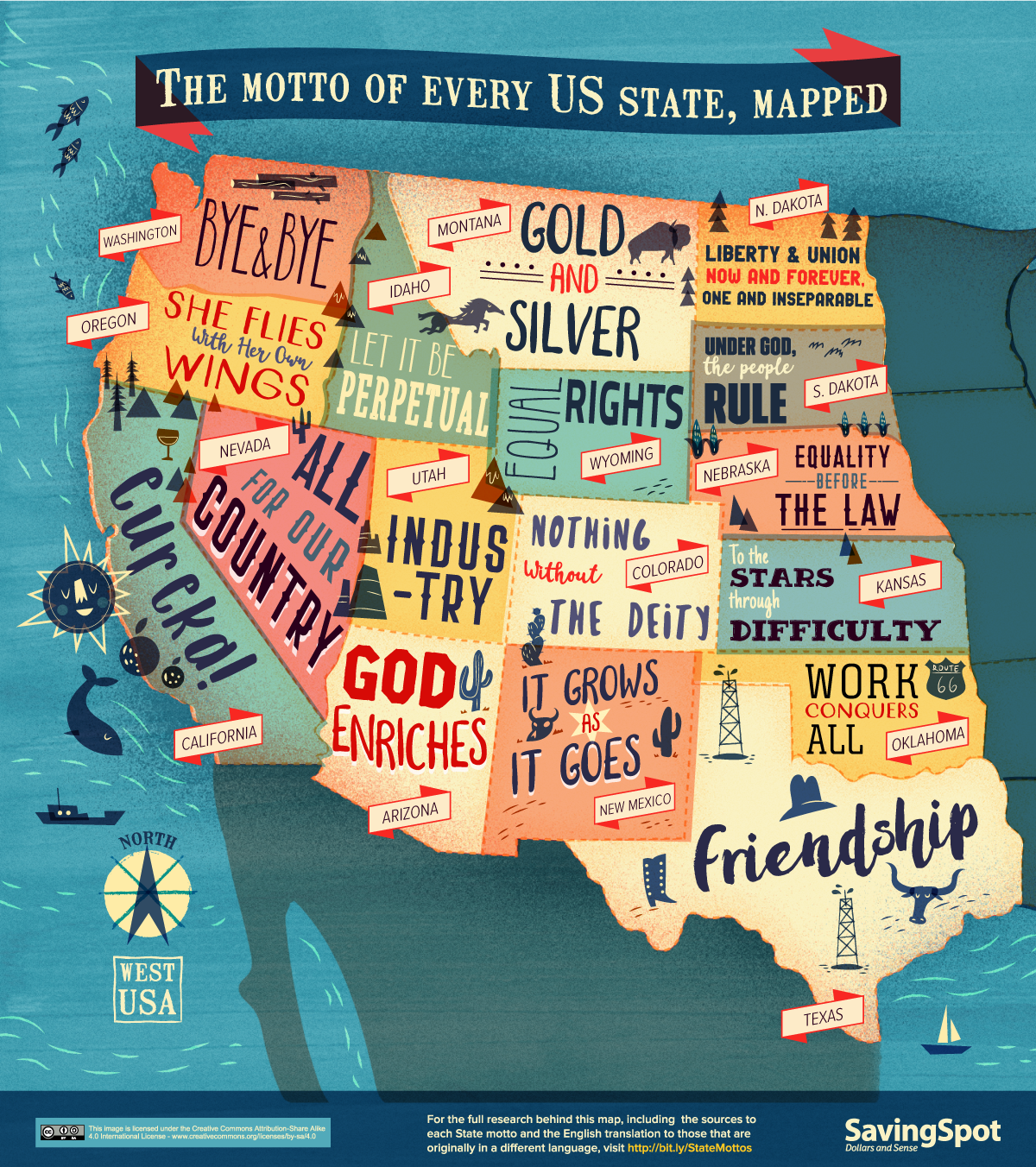 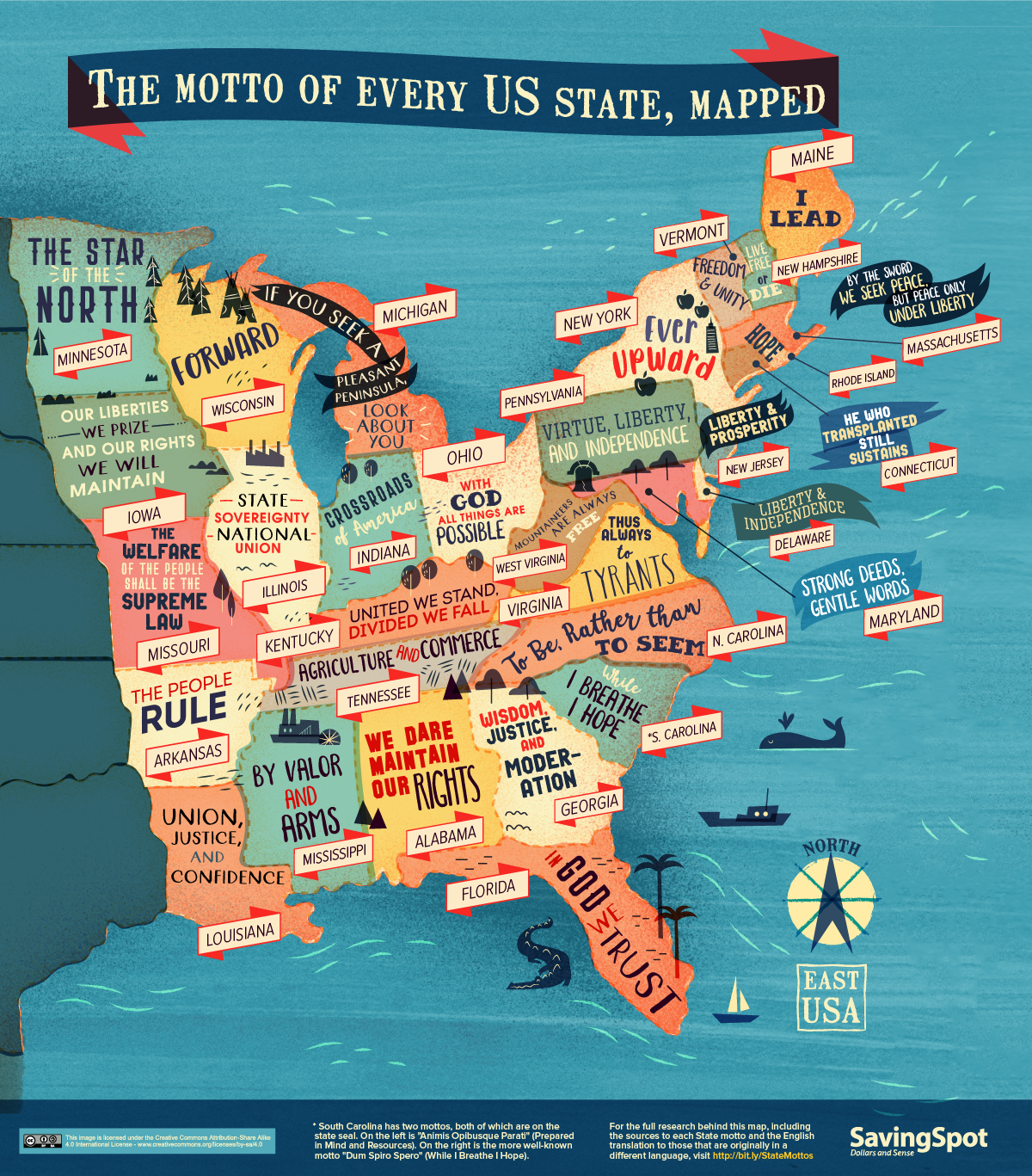 To verify the information in this map at least two sources for each motto were found, as well as two sources that confirmed the translations of the motto when not in English. In cases where a State has 2 mottos we have chosen the most popular or widely used.

For the full research behind this map, including the sources to each State motto and the English translation to those that are originally in a different language, visit bit.ly/StateMottos.