Home » The Cost of a Passport in Nearly Every Country 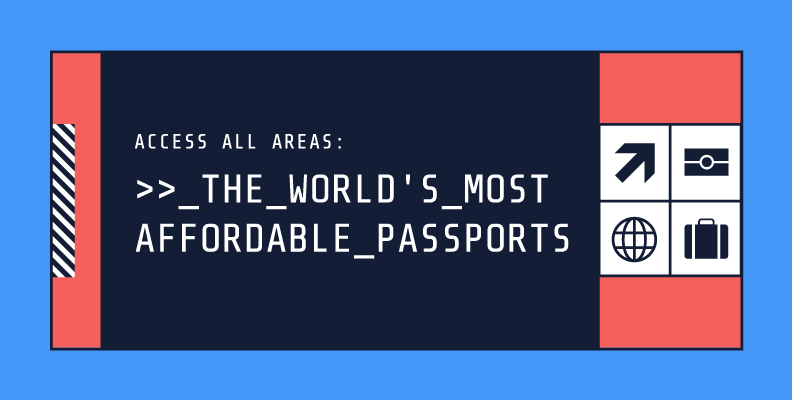 The Cost of a Passport in Nearly Every Country

The price of a passport differs from country to country. The cost is skewed even further if you take local wages into account. In some places, the average earner won’t think twice about ordering a replacement passport – while in others, a passport is an extravagance that needs careful consideration. CashNetUSA researched up-to-date passport prices and wages around the world to find out where passports are most expensive – and where they’re least affordable. 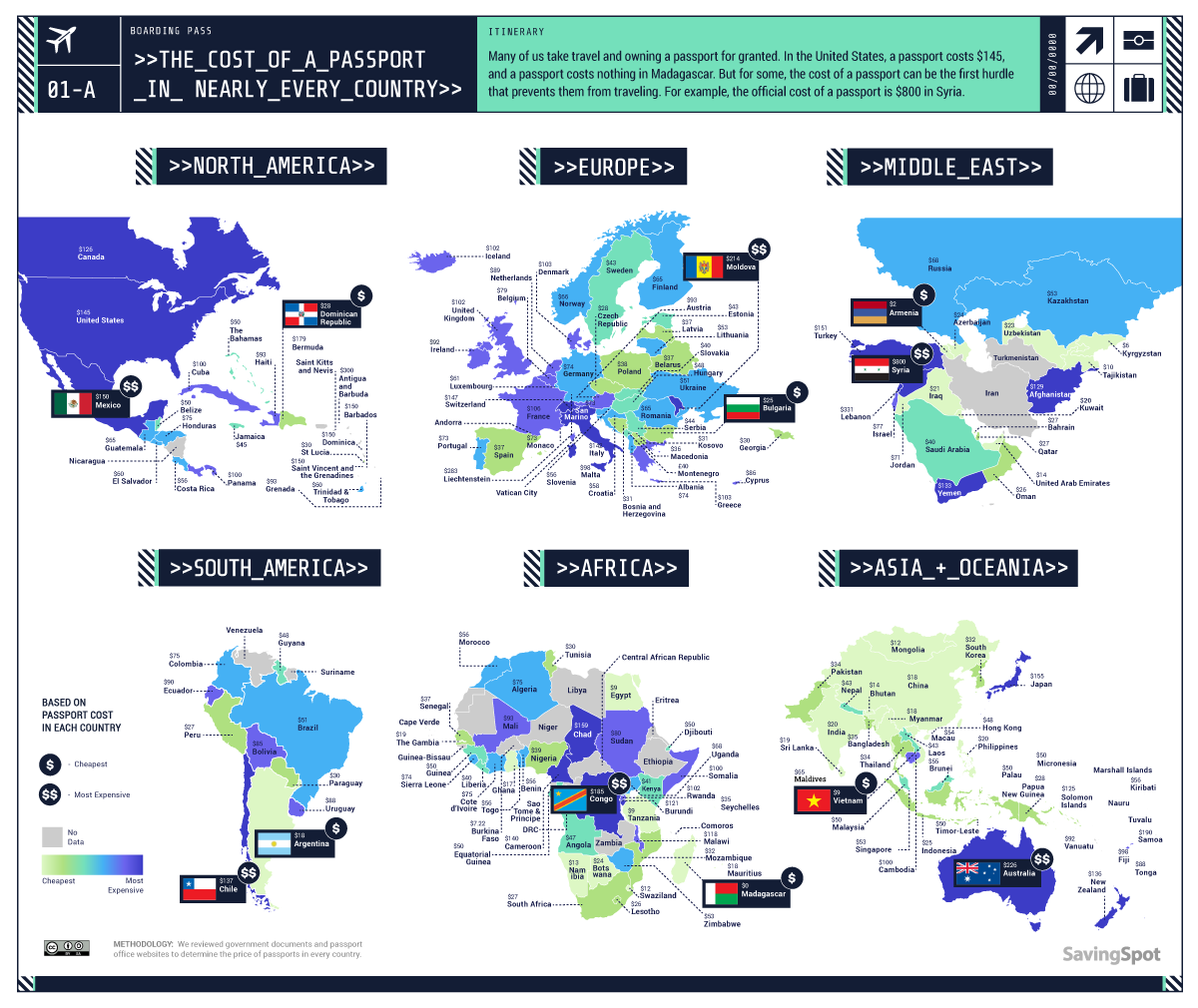 The most expensive passport in the world is that of the Syrian Arab Republic. Today, a Syrian passport costs $800 but, remarkably, it cost just nine bucks less than a decade ago. The complex political situation, corruption, the physical destruction of border crossings, and the western fear of refugees have all inflated the cost of traveling for ordinary Syrian people.

The cheapest and most affordable passport is in Madagascar. The next cheapest is Armenia’s two-dollar passport. The $145-dollar US passport is the 18th most expensive in the world.

The next chart lays out the world’s 10 most expensive passports. 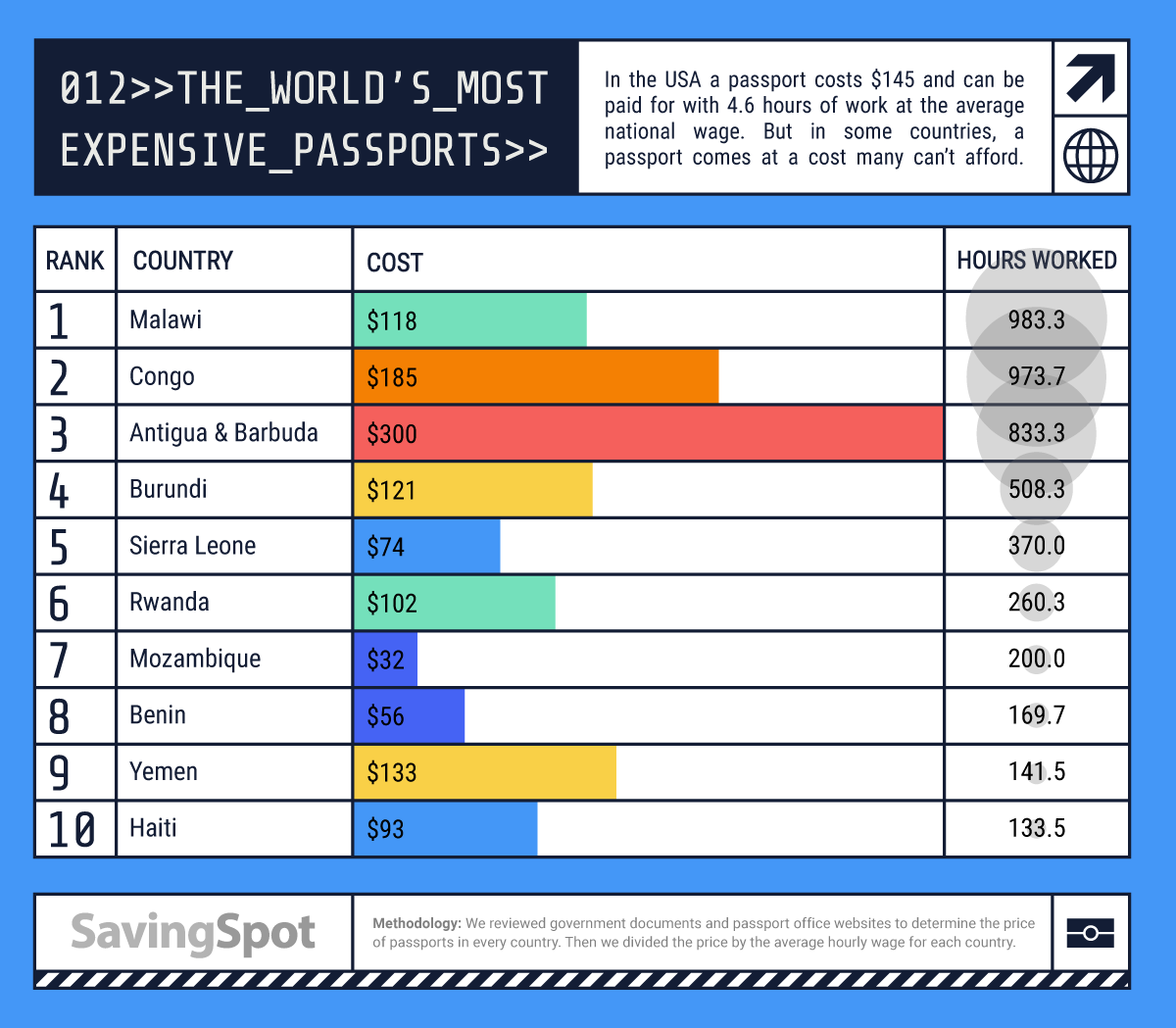 Click here to see the chart in full size

As the chart demonstrates, Syria’s passport is disproportionately more expensive than even second-placed Lebanon. But the chart also introduces the concept of affordability. It will actually take you longer to earn the money you need for a passport in Chad than in Lebanon.

And check out the disparity between Australia ($226/8.7 hours work) and Moldova ($214/90.4hrs) for an instant glimpse at how local wage levels affect freedom to travel. 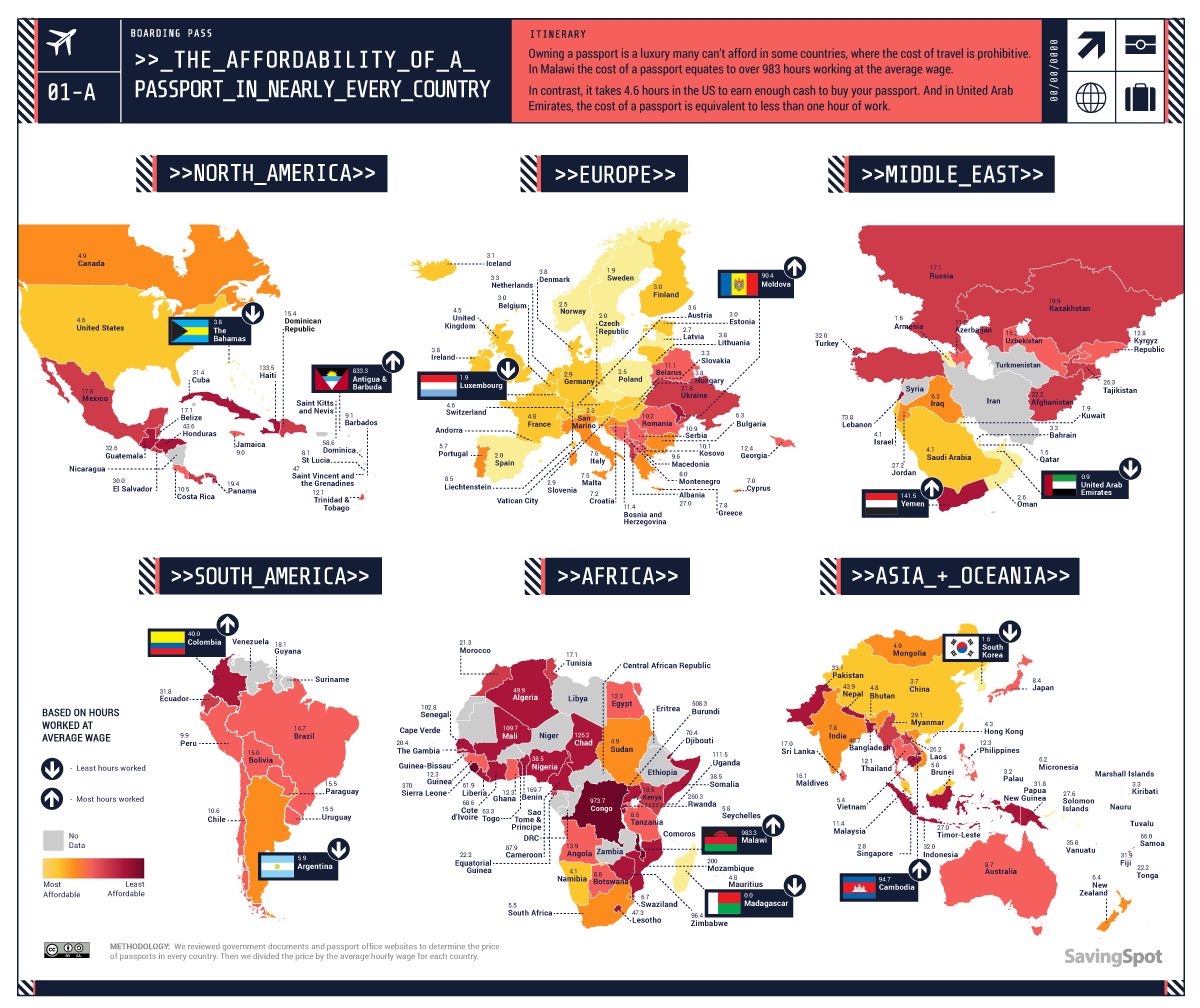 The Malagasy passport costs nothing; ergo, it takes zero hours work to afford one. The next most affordable is the United Arab Emirates passport, which locals can save for with just under an hour’s work on the average local wage.

Despite the relatively high cost of a US passport, the average American worker can afford a passport with an afternoon’s work. Whether they’ll use it is another question…

Cost vs. Affordability vs. Value

You can check out our full data country-by-country in this table, which is searchable and sortable. In addition to cost and affordability, the table shows how many countries each national passport gains access to – and the value this represents against the cost of purchase.

Aside from Syria, Lebanon shows the worst value for money. Your $331 passport offers a throughway to just 40 countries – or $8.28 per country. Armenia’s bargain $2 passport is the best value (aside from Madagascar), offering 63 countries at just 3¢ per border gate.

However, the $8 United Arab Emirates passport is more appealing: you could earn the necessary $14 in under an hour, gaining access to 170 countries at a rate of 8¢ each. By comparison, the American passport offers a further 15 open borders, but at a rate of 78¢ each. 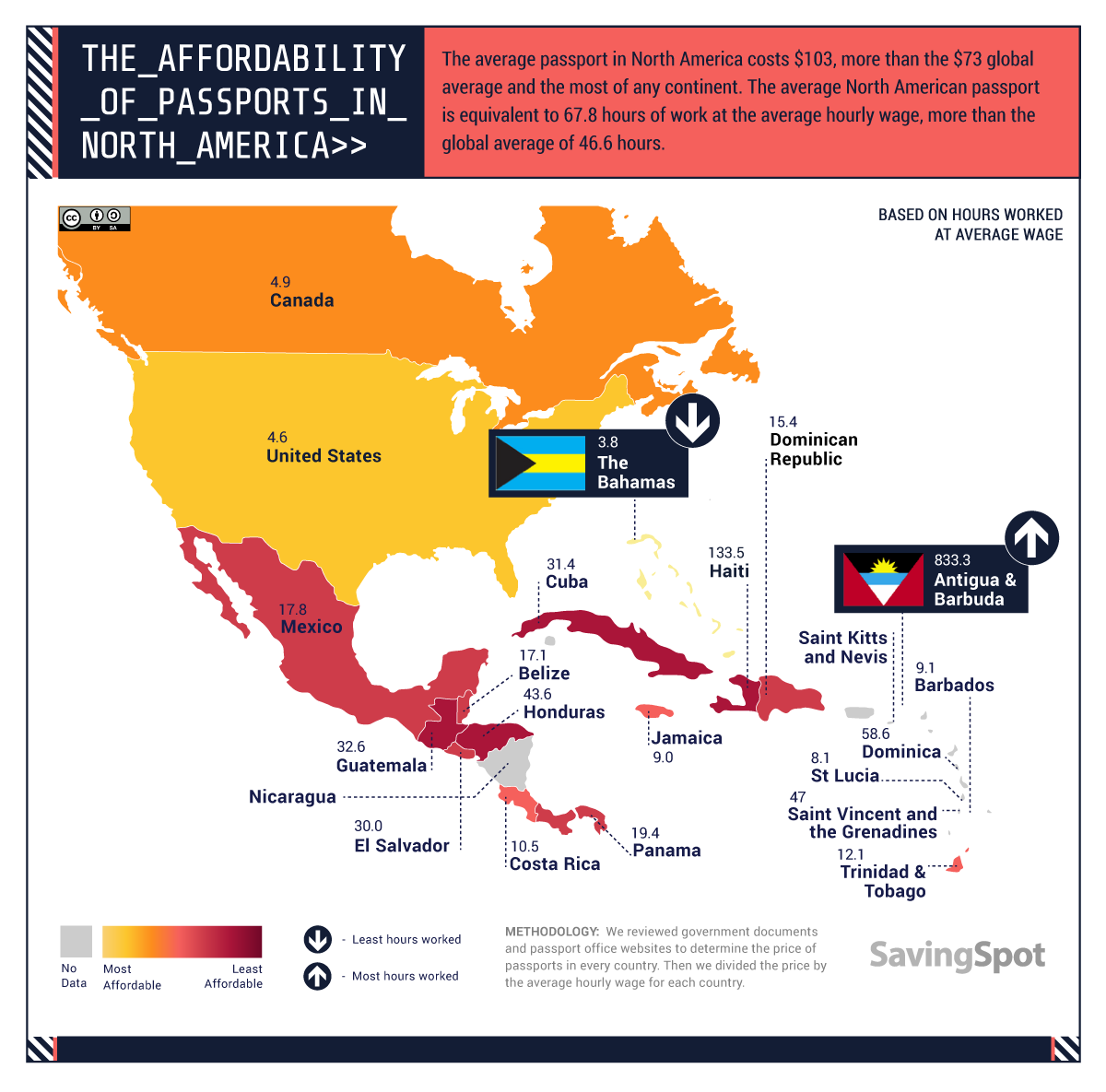 The average price of a passport in North America is higher than the global average. However, there is nowhere on the continent where you’d need to spend more than a week’s wages to pay for it. Bahamas, the States, and Canada each offer a passport you could afford after a single shift. St. Lucia’s $30 passport equates to around a day’s work and offers access to 146 countries.

Antigua and Barbuda, Haiti, and Dominica have the least affordable passports. In each case, the passport price is mid to high-range and becomes tough to afford when balanced against a low average income. Each passport gets access to more than 130 countries, apart from Haiti which only offers 49. 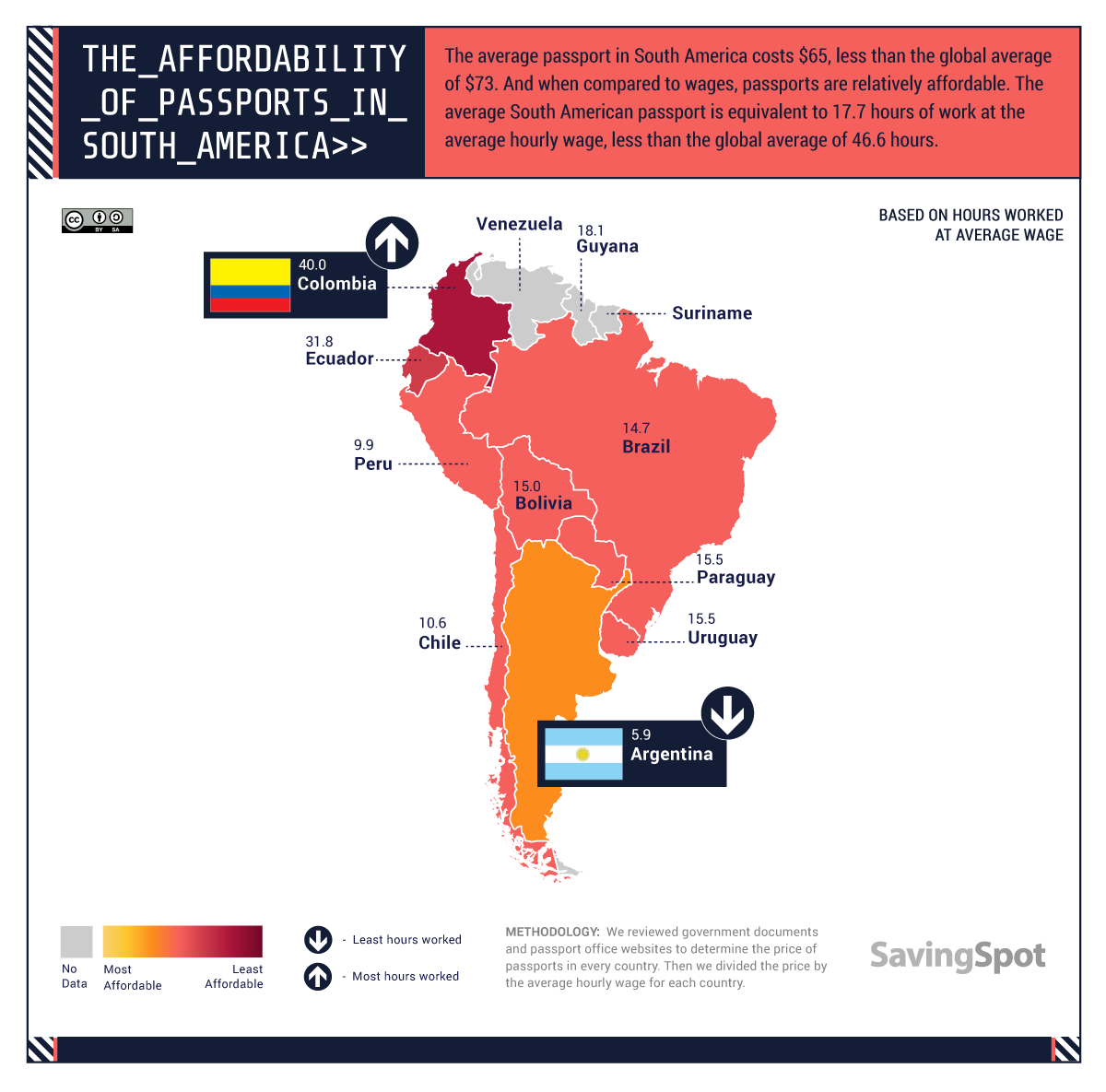 Colombia is the source of that angry red patch at the top of South America. Angry, perhaps, because it takes a full 40-hour week to earn the $75 required to buy a passport. Ecuador is not far behind, with similarly low wages against a mid-range passport.

The best value passport in this region is in Argentina. Despite an average annual salary of just $6,371, you can earn the money to buy a passport in just under six hours – since it costs a bargain $18. The Argentine passport also offers the best value, with access to 170 countries at an average 11¢ each. 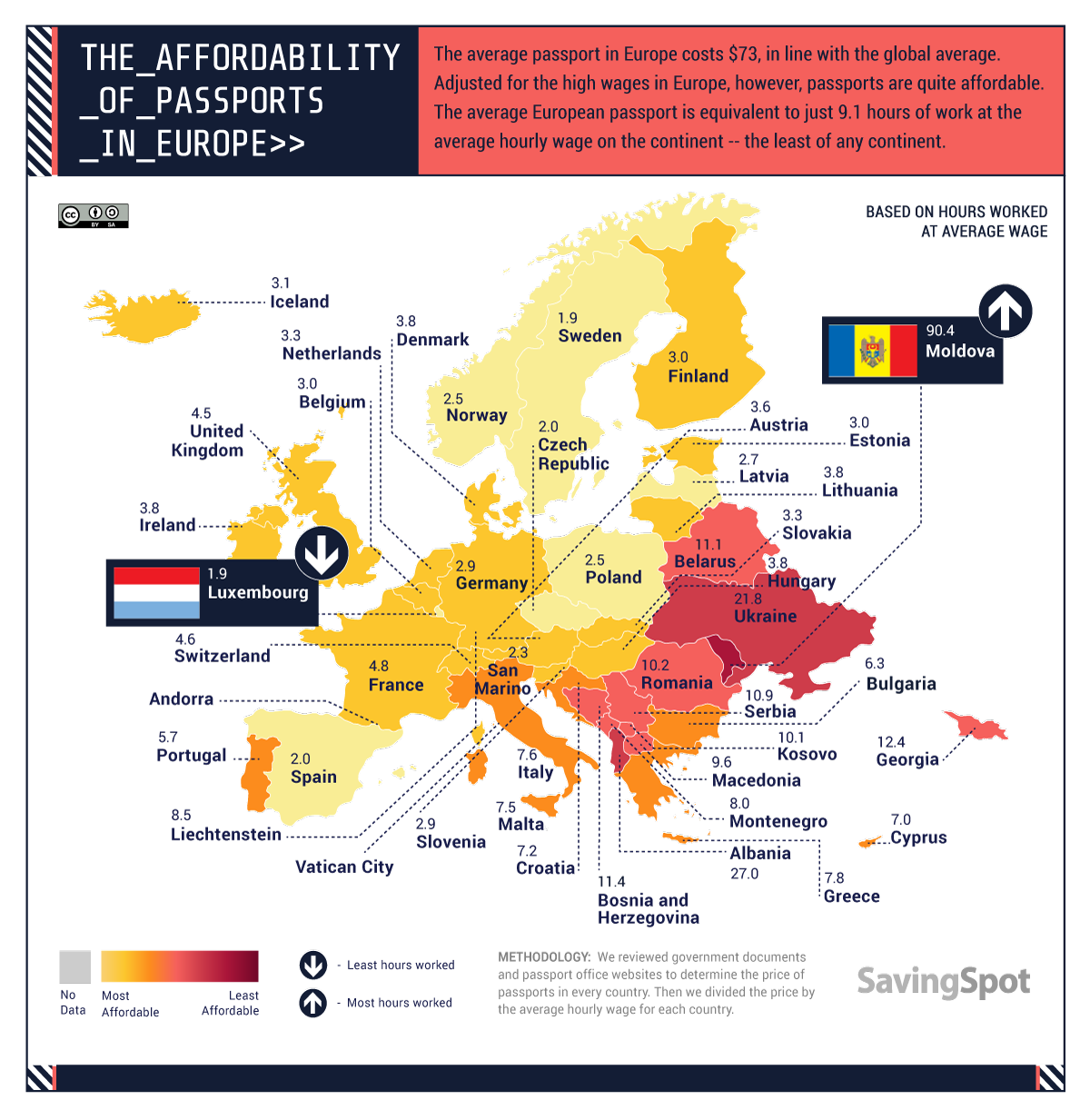 The Luxembourg passport is no cheapie at $61, but neither is it one of the most expensive. Set against an average salary of $68,681, it ties with Sweden’s passport to be the most affordable in Europe. Sweden’s passport costs just $43, but wages are considerably lower than in Luxembourg.

The Moldovan passport is the sixth most expensive in the world, at $214.

Factor in an hourly wage of $2.37 and it’ll take 90.4 hours to earn it. The UK passport has been in the headlines lately. Thanks to Brexit, it must be paired with a visa to access previously free-to-enter EU nations. Still, a Brit can earn one in just 4.5 hours, and even get it in a fetching shade of, uh, ‘freedom blue.’ 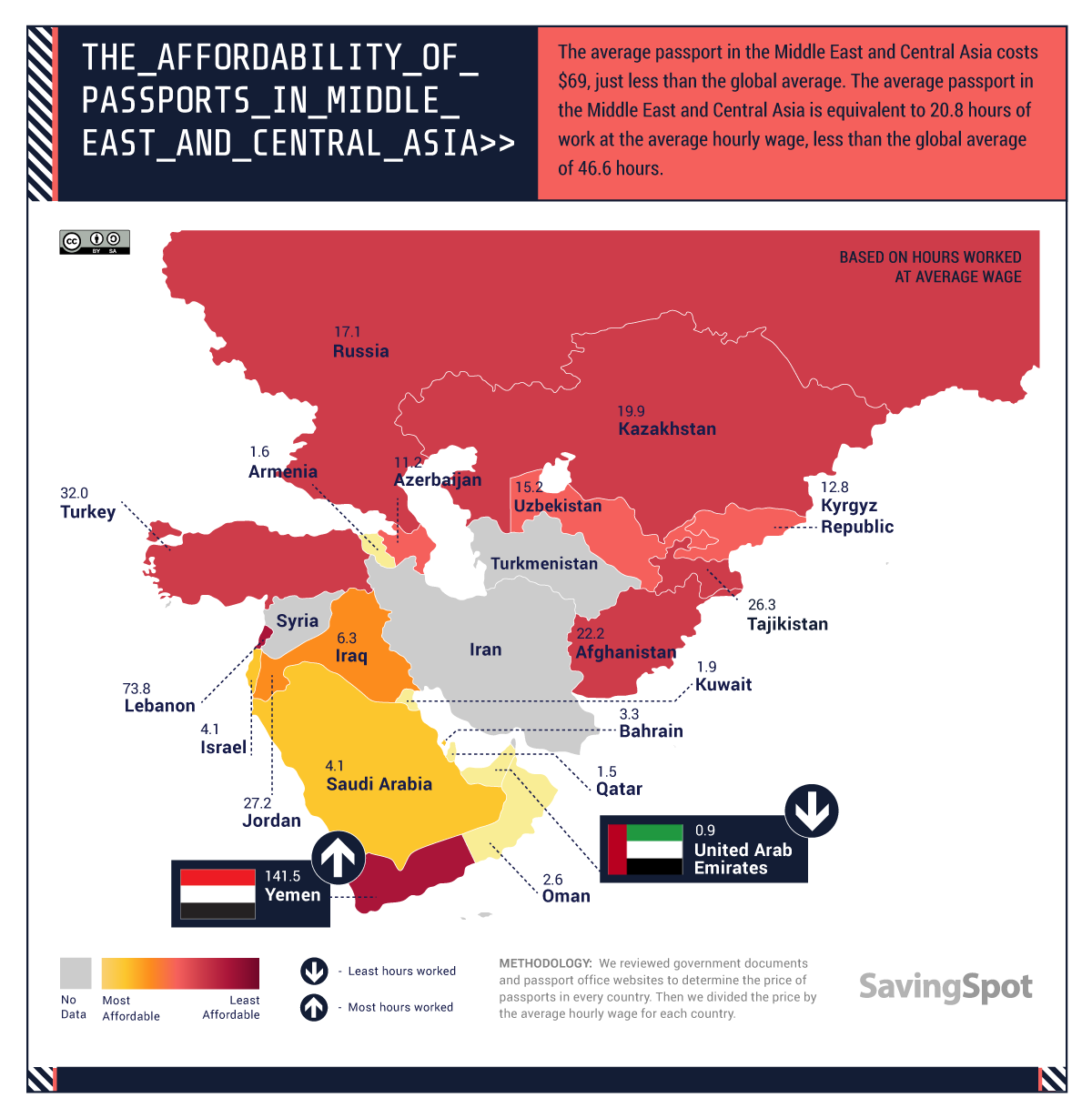 Conflict and political distrust have led to a gross disparity in passport cost and affordability in this region. Yemen and Lebanon are among the most expensive and least affordable passports in our study. Yet, the countries sandwiched between them geographically (Iraq, Israel, and Saudi Arabia) get a far better deal.

Passports in this region also tend to offer far more restrictive travel options. Qatar has the second most affordable passport in the region. However, the $27 passport offers access to only 95 countries.

Rest of Asia and Oceania 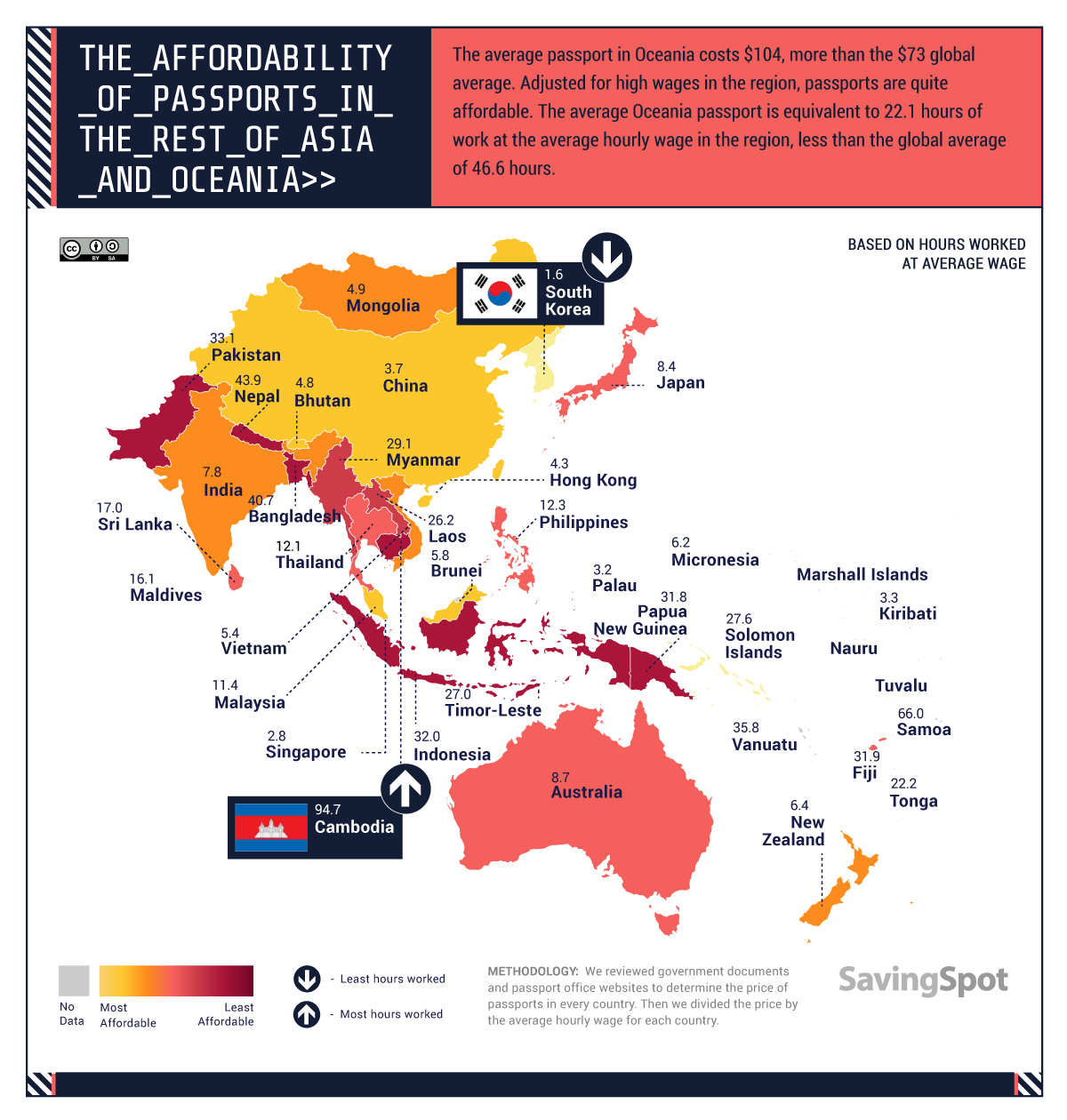 The South Korean passport is a real winner. At just $32, the average Korean can afford it after 1.6 hours work, gaining access to 189 countries. Japan and Singapore are the only countries in the world whose passports grant access to more destinations (191 and 190 respectively).

The Australian passport loses marks for a price tag that’ll make you think twice: $226. However, the average hourly wage in Oz is $26.07, so you can cover it with a full day’s work (if you skimp on lunch). Cambodia’s passport is the least affordable in this region. A hundred bucks gets you access to just 54 countries, and you’d need to work 24/7 for four long days to afford one. 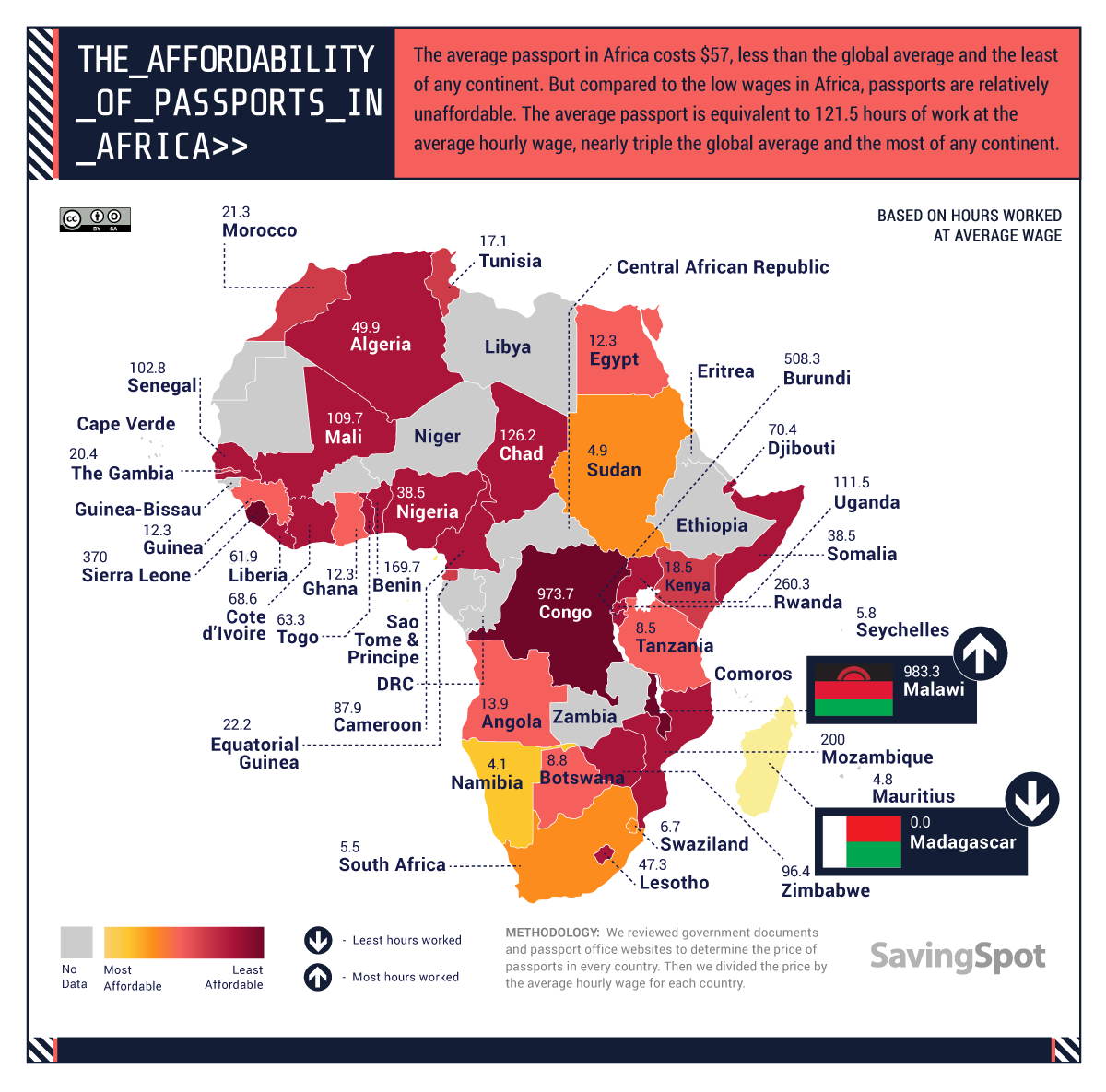 Africa entertains the extremes of passport affordability. The Madagascar passport is free, making it the best value and affordability in the world, although it offers access to only 55 countries. The next cheapest papers in the region are the $9 passports of Tanzania and Egypt. The Tanzania one just pips Egypt on both value (8.5hrs vs. 12.3hrs) and access (71 countries vs. 50).

Congo’s $185 passport is pricier than that of wealthy western countries such as the UK and France.

And with an average annual salary of under $500, you’d need to work more than 900 hours (over four months of regular working hours) to afford it.

Only three African passports offer access to more than 100 countries: those of South Africa, Mauritius, and Seychelles.

Do you have your passport in order? Whether your home nation offers a bargain passport or you had to work for days to earn it, your passport is something to value and make good use of. At least until borders are abolished and we can all live together as one people.

We reviewed government documents, websites, and other sources to determine the price of a passport in every country. We converted all foreign currencies to US dollars using market exchange rates as of January 2021. For countries that offered passports with various booklet length and expiration dates, we listed the price for the passport with the fewest pages and the furthest expiration date.

To determine the affordability of each passport, we divided the price of each passport by the average hourly wage for each country, yielding the number of hours an average citizen must work to afford a passport.