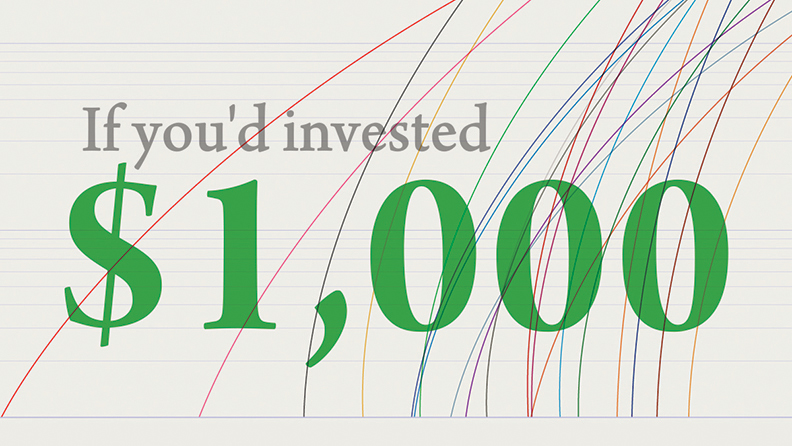 The initial public offering (IPO) of a company’s stock can be a risky investment.  IPOs tend to underperform compared to the average of the rest of the market. Even high-profile IPOs such as Uber, Lyft, and Peloton took dramatic plunges in value in their first days of trading. On the bright side, dramatic turnarounds like these offer investors a chance to earn huge returns on the IPOs of underperforming companies they believe to have a bright future.

In fact, some of the most astonishing comebacks over recent decades have grown at an average rate of more than 25% a year since their first day on the market. If you’d invested $1,000 in Amazon at the time of its 1997 IPO — when the e-commerce giant was still marketing itself as an online bookstore, and had yet to turn a quarterly profit — you could have more than $1 million worth of Amazon stock today.

We decided to look at the comeback stories of 47 well-known companies. We first calculated the value of a $1,000 IPO investment from the date of a company’s IPO or first appearance on a U.S. stock exchange to its value today. We charted what the return on investment for these companies would be, and created industry-specific charts to show how these big-name companies stack up against their competitors.

Some of these giants have had decades to appreciate in value. Disney, McDonald’s, and Johnson & Johnson, all first went public over 50 years ago, and boast some of the highest returns. Year-over-year, however, we show that the electronics, financial services, and travel sectors have produced some of the most valuable IPOs in recent history. The number one? Hilton stock has had the fastest average annual growth of any company in our analysis – while Amazon, Booking Holdings, and Netflix, weren’t far behind. 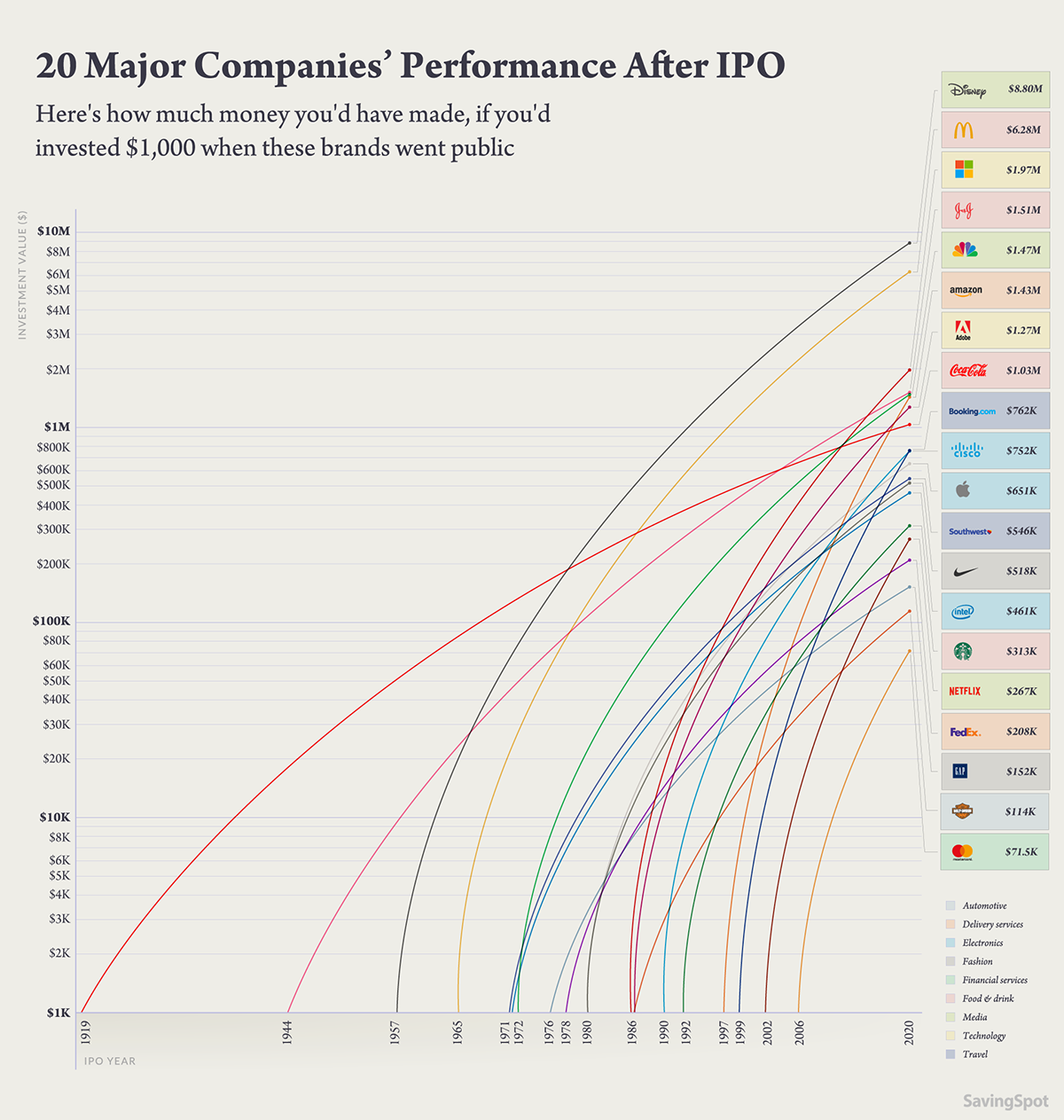 Growth in the automotive industry tends to be slow and steady, but there is one standout name in recent years. Tesla stock was first issued at $17 a share on June 29, 2010, and has since grown at an average rate of roughly 37% a year — the sixth most of any company in our analysis. At the time of its IPO, Tesla had yet to report a profitable quarter, with net losses of approximately $300 million. Still, demand for the stock was high, and Tesla shares finished trading at $23.89 on their first day. 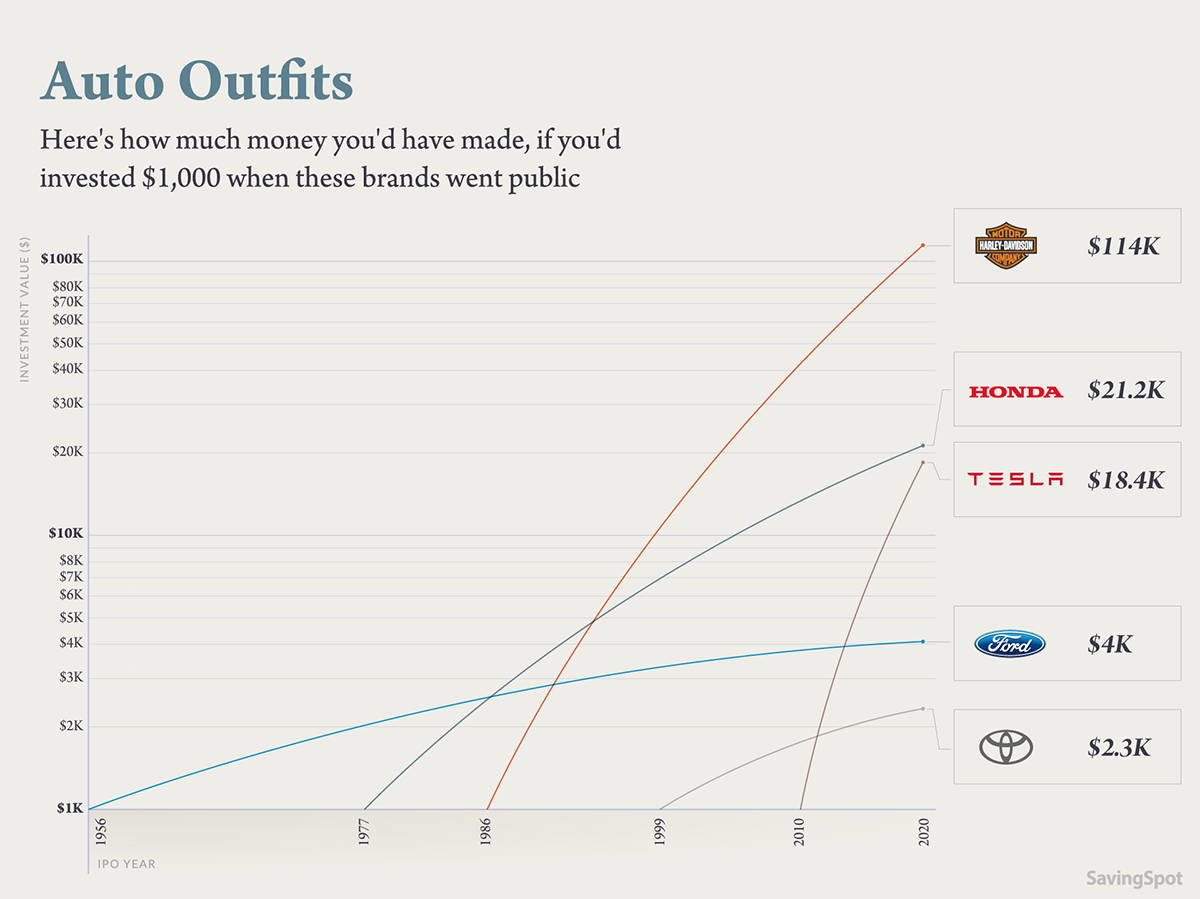 Often considered the original Silicon Valley startup, Hewlett-Packard was founded by two 26-year-old electrical engineers in a garage near Stanford University in 1939. The company hit its first major sale and big break, when Walt Disney Studios bought eight audio oscillators for use in the production of Fantasia, starting the company on a path of growth and innovation that continues today. While HP has had some dramatic upswings in value since its IPO, long-term investment in the stock has had relatively little payoff. HP stock has grown less than 1% annually since its 1957 IPO, nearly the slowest average annual growth of any company in our analysis. 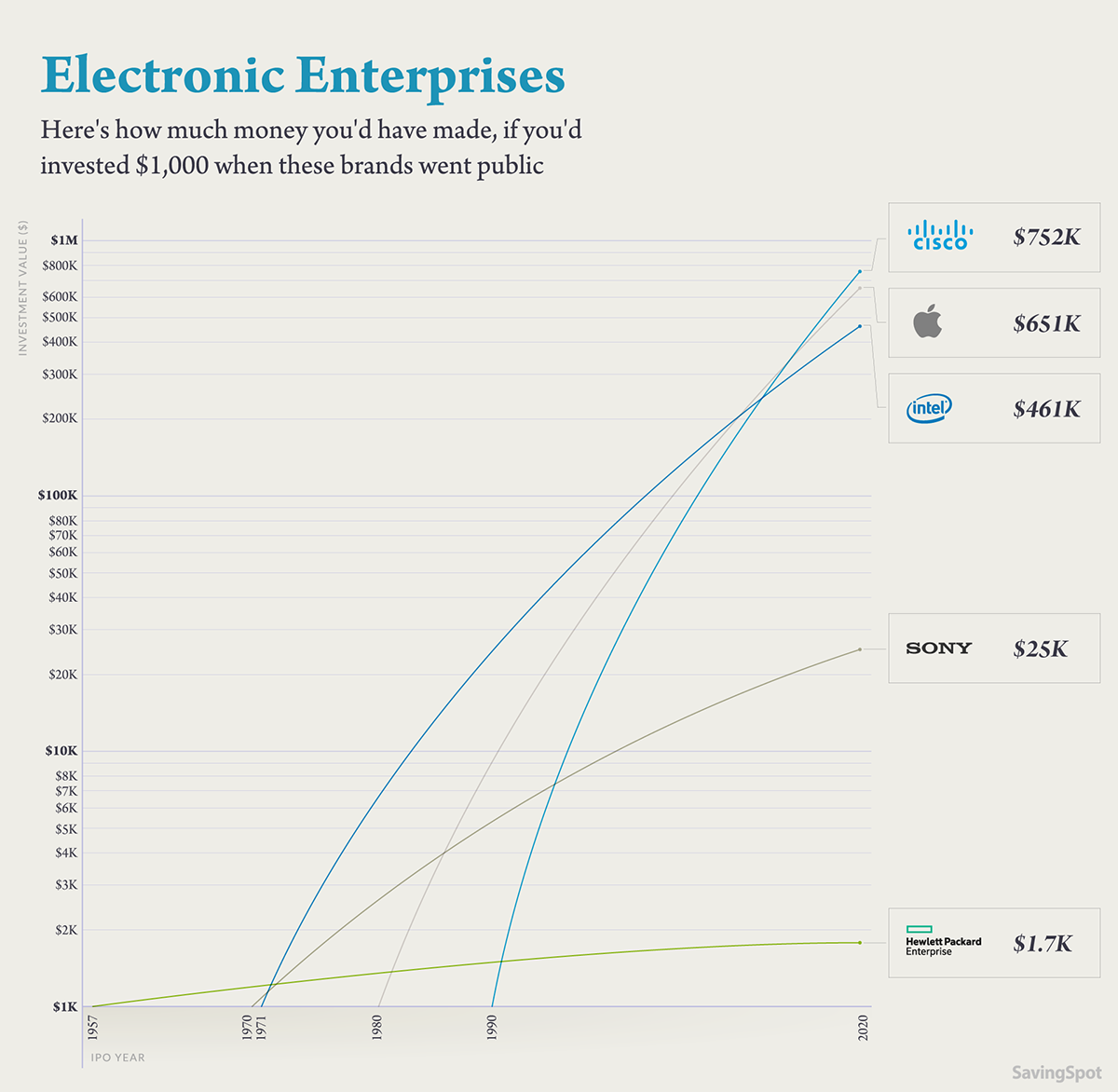 At the time of its 1997 IPO, Amazon was still marketing itself as the world’s largest bookstore and was still four years away from reporting its first quarterly profit. While initial demand for Amazon stock was high — shares closed at $23.50 on their first day of trading — nobody quite guessed what would happen next.

Amazon has grown faster than any large company over the past two decades, expanding from $15.7 million in sales in 1996 to $232.9 billion in 2018. The ‘largest bookstore’ is now the ‘everything store,’ and around 82% of American households today have Amazon Prime. Amazon stock has appreciated at an average annual rate of 38.2% since going public. That $1,000 investment you might have made in 1997? It would be worth $1.4 million today.

Amazon’s rapid growth has had consequences for other delivery companies. Amazon and FedEx once relied on one another for business and logistics support, but Amazon’s investment in its own delivery infrastructure has put the two companies head-to-head. FedEx recently ended a ground delivery contract it had with the e-commerce giant, with CEO Fred Smith publicly referring to Amazon as a FedEx competitor. FedEx stock price has been more volatile in the last 10 years than it was in its first 30 years on the market. But, overall, FedEx stock has yielded an average return of 13.7% since its 1978 IPO, better than the S&P average. 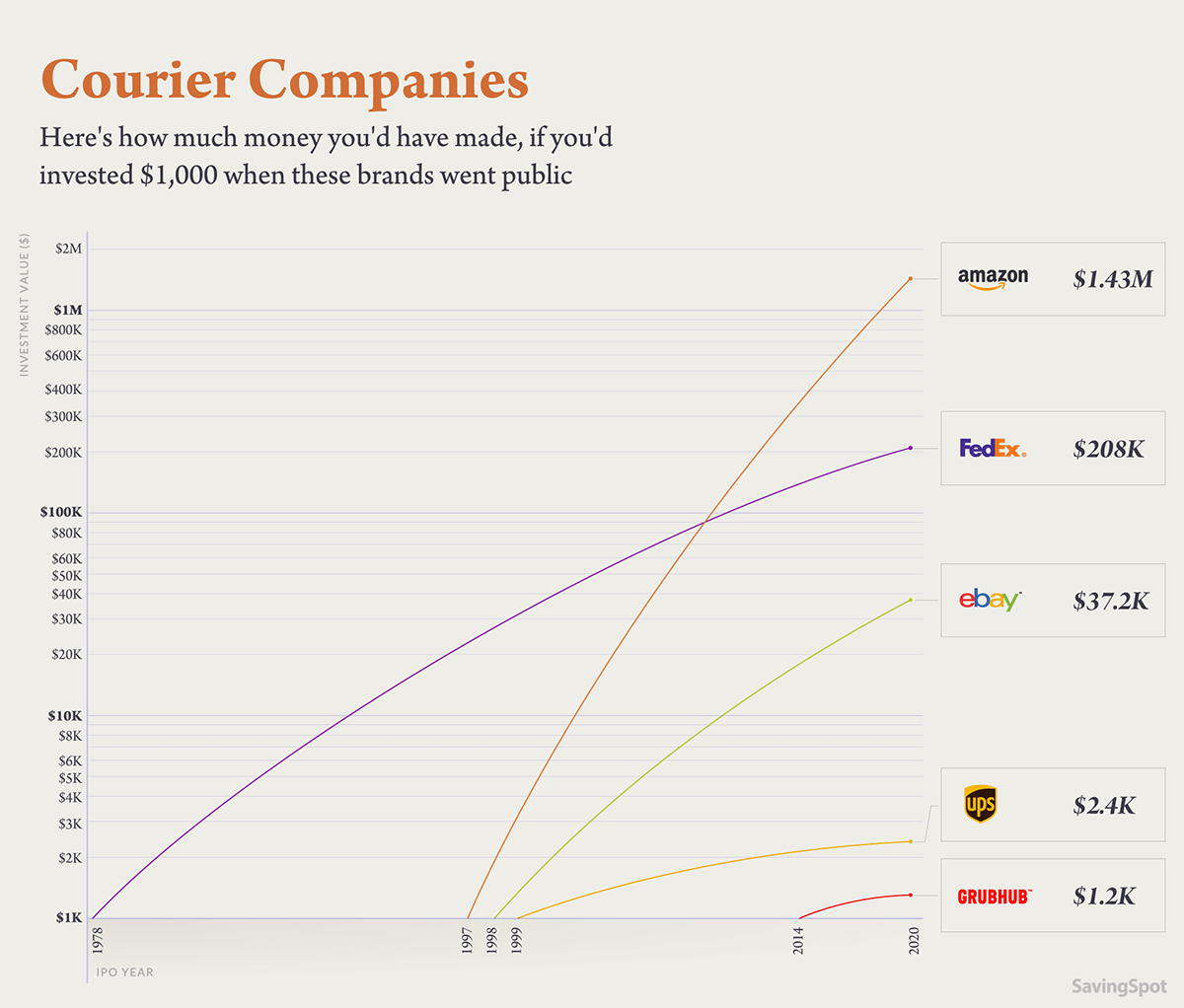 By far, the largest standout in our fashion segment is Nike. Nike first went public in 1980, 14 years after opening its first retail outlet, at a time when the company had a revenue of $270 million and boasted 50% of the athletic shoe market share. And they hit the ground running, signing Chicago Bulls rookie Michael Jordan to co-produce a line of Air Jordan apparel in 1984, hitting $1 billion in annual sales in 1986, and launching the iconic “Just Do It” campaign in 1988. 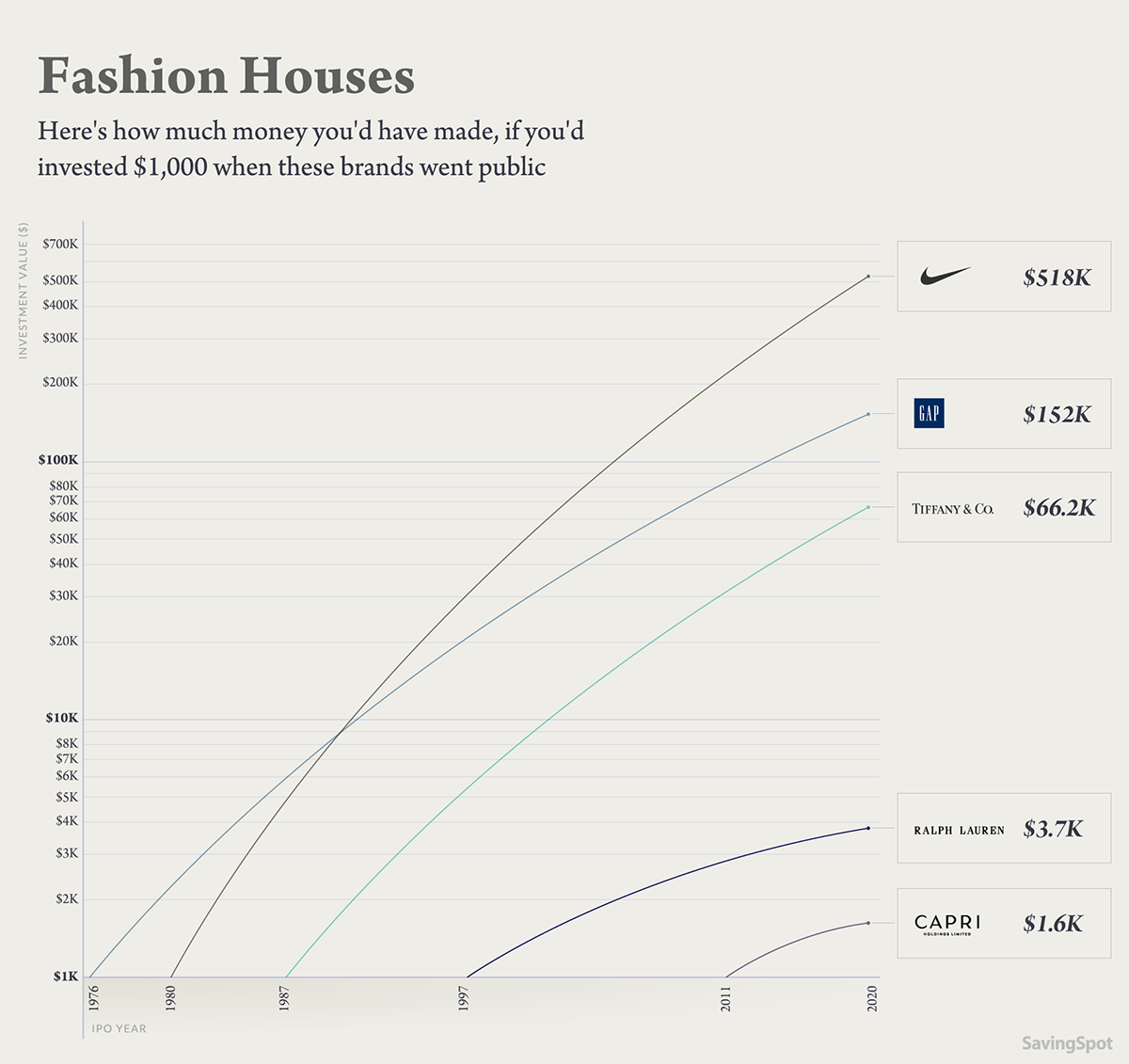 Our food and drink segment is largely comprised of older companies that quickly innovated their way into a dominant market position, and have since expanded and diversified as they became household names.

The Coca-Cola Company, founded in 1892, was the first to successfully market soft drinks to the mass market, and today its portfolio includes Sprite, Minute Maid, vitaminwater, and over a dozen other major brands. In 1906, The Kellogg Company became the first company to market toasted corn flakes as a breakfast food. Today, Kelloggs  operates a breakfast empire that includes the brands Special K, Frosted Mini-Wheats, Pop-Tarts, and Eggo.

Starbucks seems to have learned from McDonald’s example. Both companies moved quickly to put stores in high-traffic, high-visibility locations, and have instantly recognizable brands that promise ‘you know what you’re getting’ wherever you are in the world. Yet while Starbucks has approximately 6,000 fewer locations than McDonald’s, Starbucks’ 2018 annual revenue exceeded that of McDonald’s for the first time. Starbucks stock has enjoyed similar growth as the hamburger giant, yielding an average annual return of 23.4% since its IPO — compared to 17.4% for McDonald’s stock. 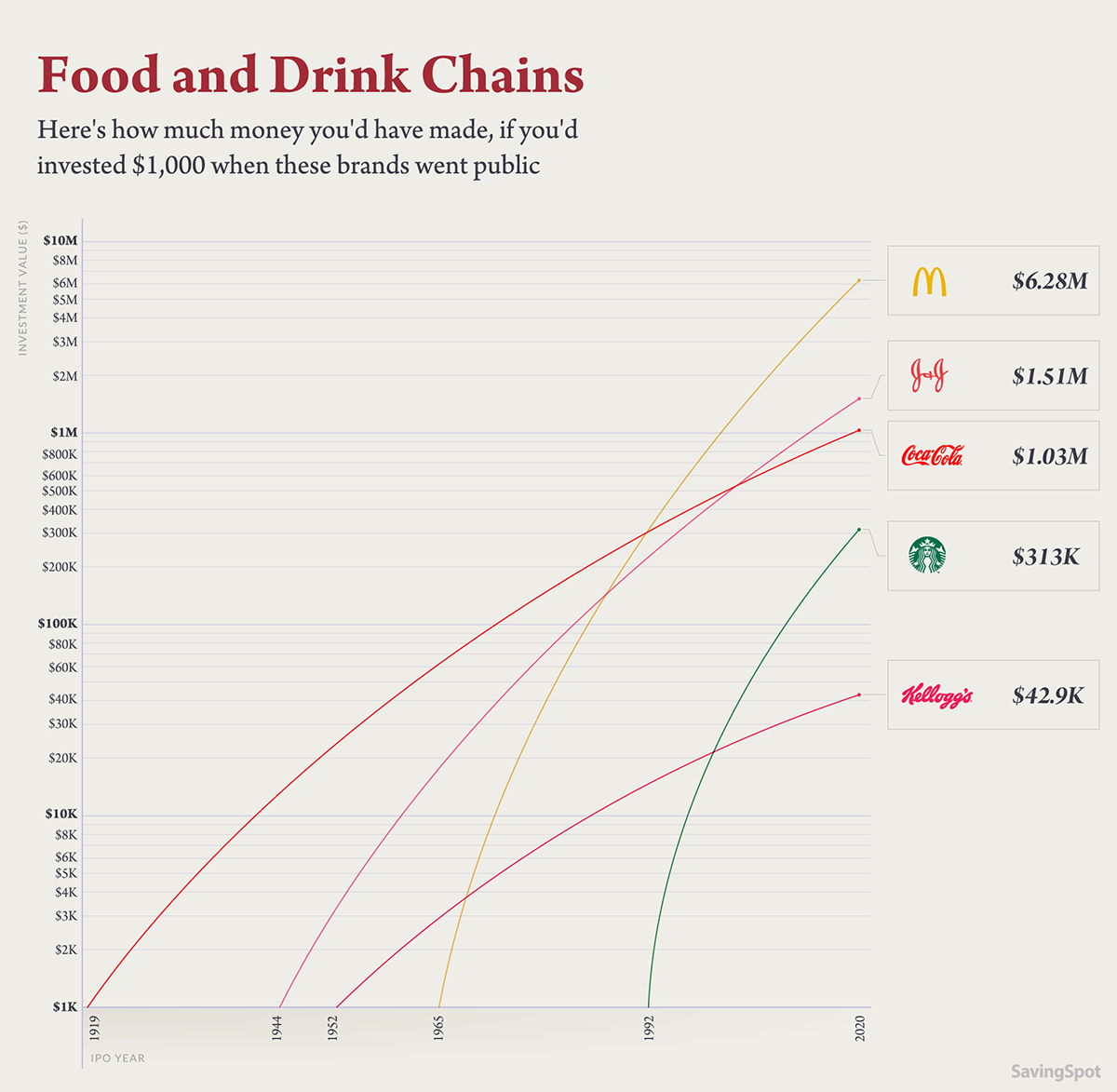 Two of the most successful IPOs of all time, Mastercard and Visa, went on the market within two years of one another. After 40 years as a private company, Mastercard debuted on the NYSE on May 25, 2006, at $39 a share. There were a number of reasons to pass on the stock at the time. Mastercard was facing increased competition from Discover, American Express, and PayPal. And a large share of the IPO proceeds were slated to go towards defending Mastercard in several lawsuits. Still, shares closed at $46 on their first day of trading. Since then, Mastercard stock has yielded an average annual return of 37.4%, the fifth most of any company in our universe.

Visa’s IPO enjoyed similar success. Visa stock first debuted on the NYSE on March 18, 2008, just two days after the collapse of Bear Stearns and in the atmosphere of a burgeoning credit crisis. However, Visa doesn’t make credit card loans, which limited the company’s exposure to default risk and late payments – making it an attractive IPO to investors. Visa stock closed at $56.50 on its first day of trading, up $11.50 from its $44 IPO price. Since then, the stock has had an average annual return of 27.2%, the eighth highest in our analysis. 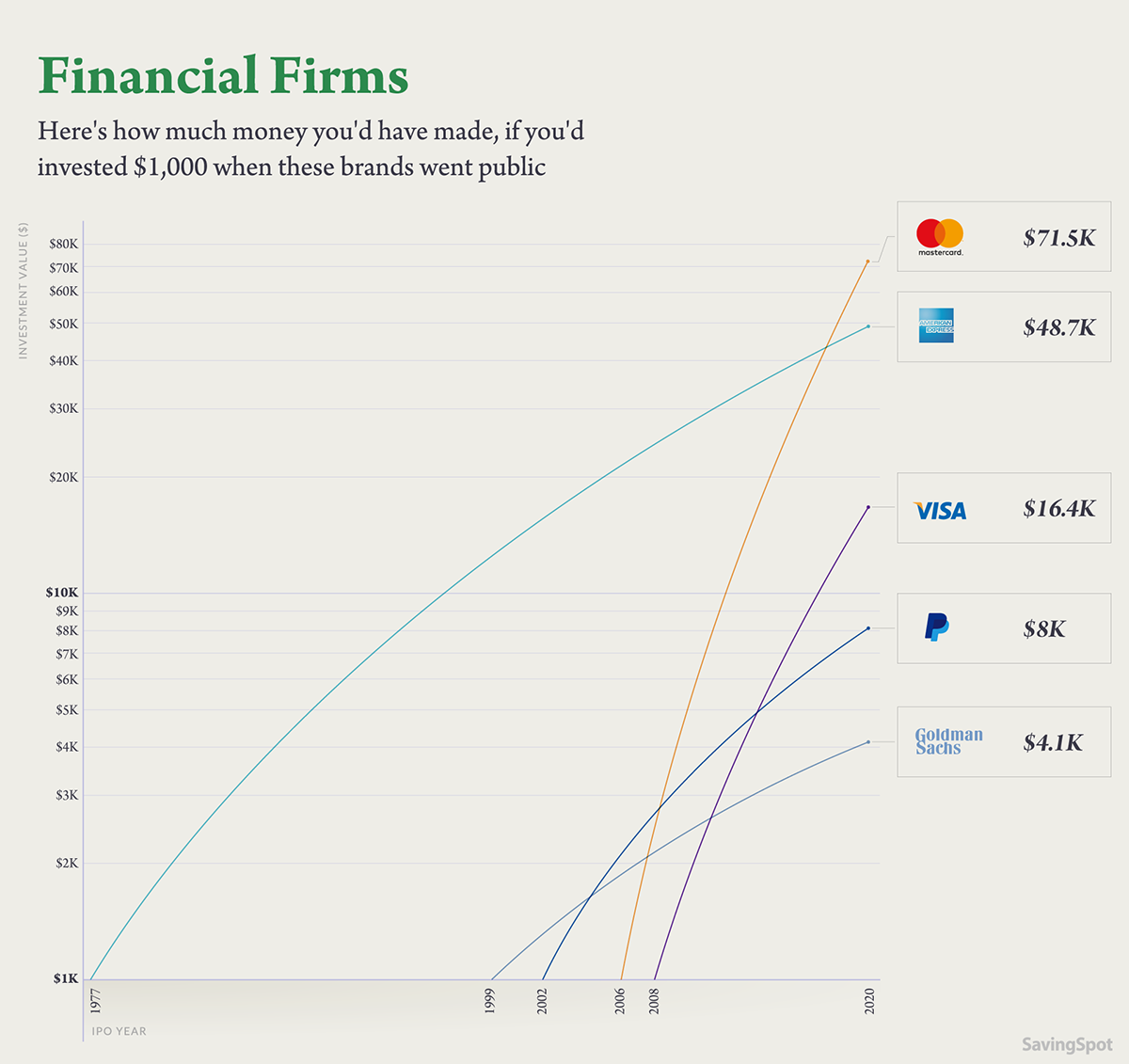 In 1957, the year of Disney’s IPO, Walt Disney drew a visual diagram representing the media giant’s business plan: a portfolio of studio films that, through a complex web of arrows representing value creation, give and receive value from tangential assets like Disneyland, music, and merchandise licensing. Today, Disney can figure Marvel Studios, 21st Century Fox’s film and TV assets, and ABC into that web. Due to the company’s rapid growth, a $1,000 investment in Disney’s 1957 IPO would be worth $8.8 million today — the most of any company on our list.

Netflix first went public in 2002 at $15 a share. Demand was high, and the stock closed at $16.50 on its first day of trading, but few predicted how valuable the DVD-by-mail company would become over the next 15 years. Streaming launched in 2007, original programming in 2013, and in 2018 Netflix invested $12 billion in original content. The result? Annual revenue has increased tenfold, growing from $152.8 million in 2002 to $15.8 billion in 2018. Netflix stock has yielded an average return of 37.8% a year since its IPO, the fourth most of any company in our analysis. 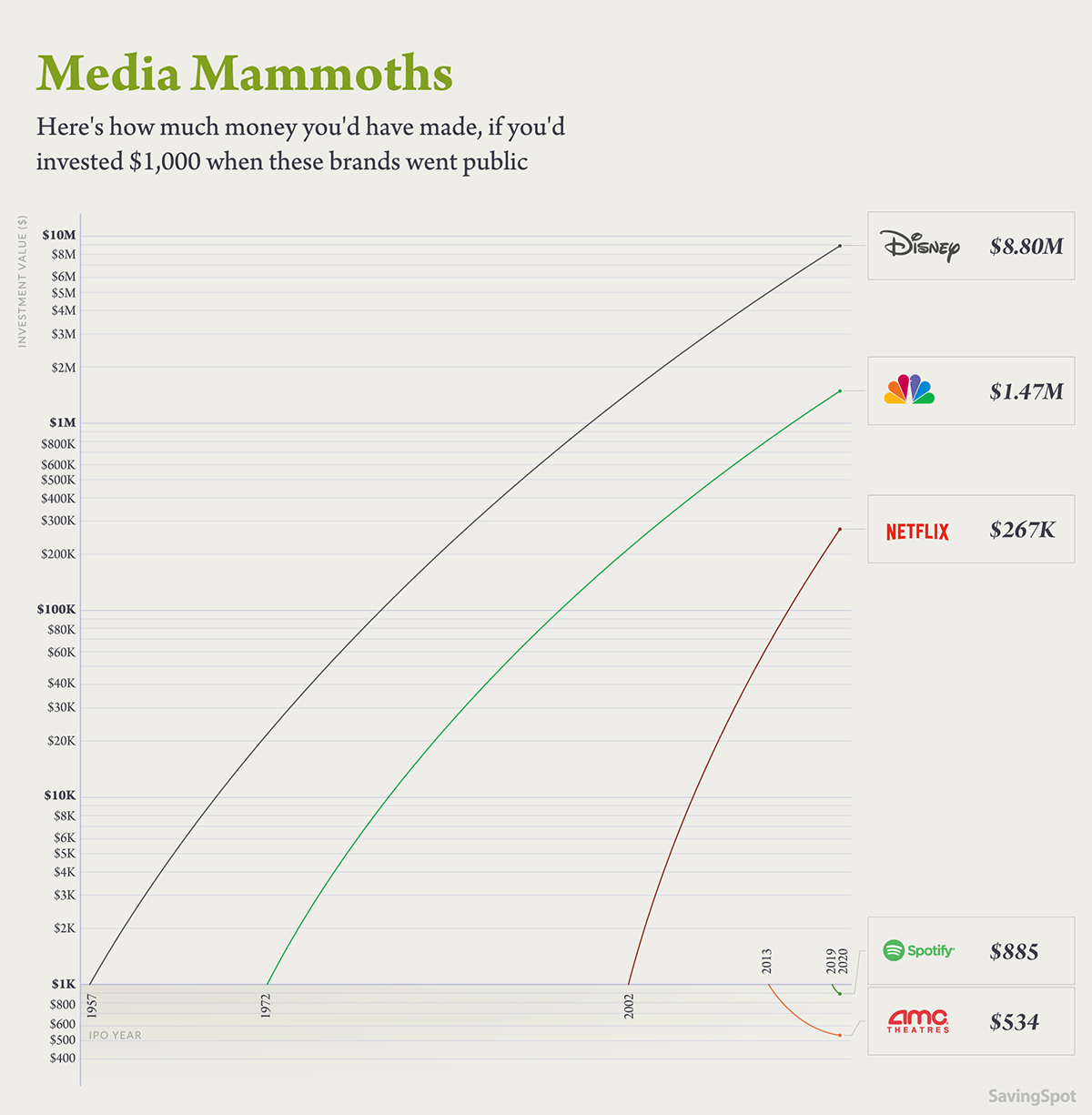 In an industry that has been home to some of the highest-profile – and most contentious – IPOs in recent history, Facebook stands out as one of the biggest IPO success stories of all time. At the time of its 2012 IPO, some 50% of Americans believed Facebook was a passing fad, and that the social network’s expected price was too high. Investors believed that Facebook was near the peak of its relevancy and user engagement and that the company had drastically overpaid for its $1 billion acquisition of Instagram.

The worst-performing IPO investment in our technology segment is Snap Inc. While Snap stock closed at $24.48 a share on its first day of trading — up from an IPO price of $17 — the stock soon plummeted as investors grew worried over issues of profitability and increased competition from Instagram and TikTok. Today Snap stock trades at around $15, making a $1,000 IPO investment in the company worth less than $650. 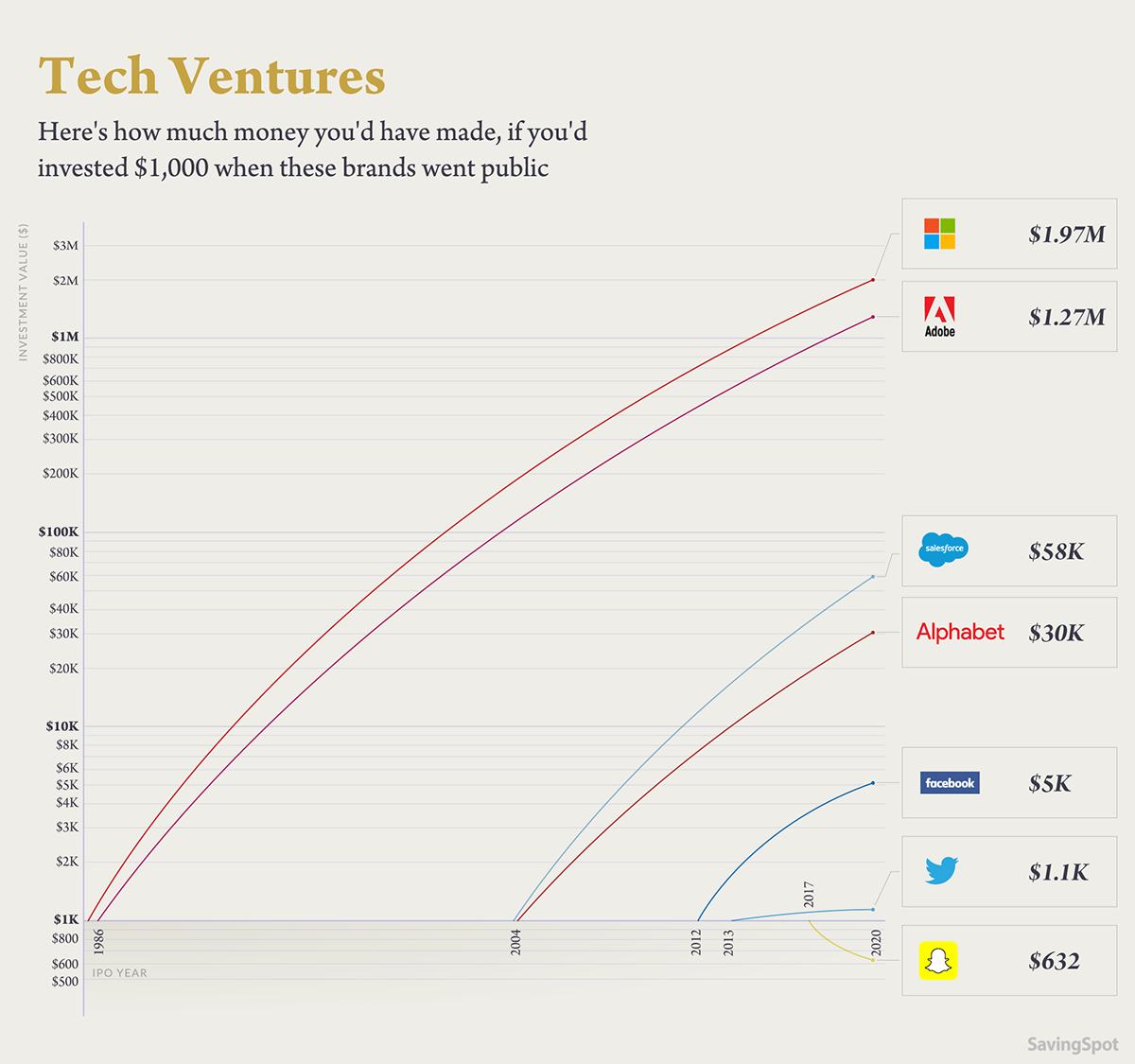 Travel industry investments grew the most of any industry in our analysis, at an average of 23.9% a year. Mostly this is down to Hilton and Booking Holdings. Hilton Hotels had been listed on the NYSE since 1947, but the company was bought out and made private in 2007. It went public again on December 11, 2013, with an IPO priced at $20 a share. Hilton Worldwide spun off its time-share business and many of its hotel properties into two separate companies in 2017, and since then demand for the hospitality stock has been sky high. The share price of Hilton Worldwide has grown at an average rate of 47.5% a year since its IPO, the largest increase of any company in our analysis.

Priceline changed its name to Booking Holdings in 2018, having held its IPO in in the midst of the dot-com bubble in 1999, two years after its founding. Shares soared on their first day of trading — closing at $69, up from a $16 IPO price. They continued to rise as Priceline acquired Booking.com in 2005, Kayak.com in 2013, OpenTable in 2014, and Momondo in 2017, as well as a number of smaller acquisitions in the intervening years. Booking Holdings stock has increased at an average annual rate of 38.0% since its IPO, making a $1,000 investment in Priceline’s IPO worth over $750,000 today. 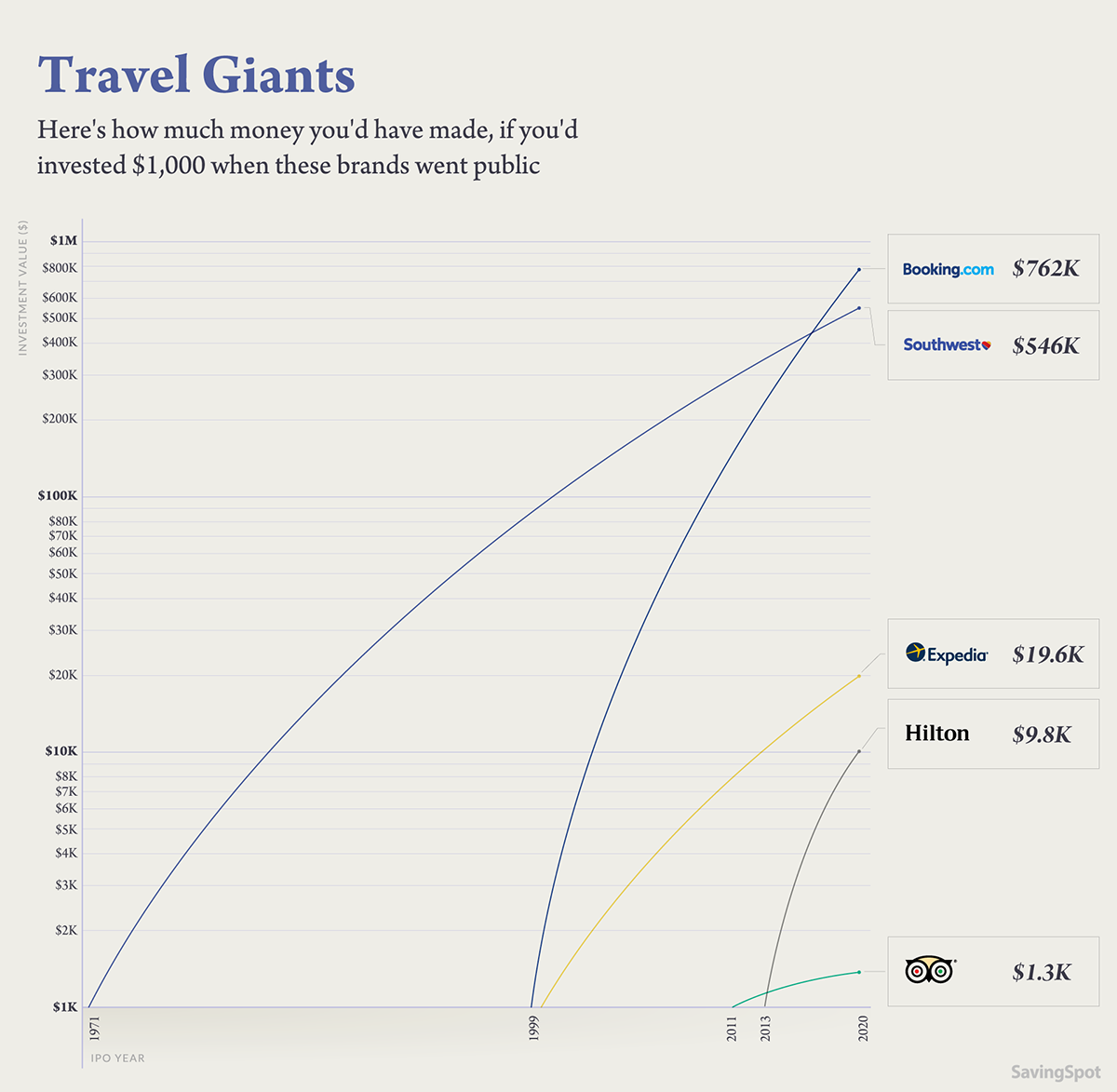 Companies such as Amazon and Netflix went public at a time when their core businesses were still books and DVDs-by-mail with annual sales less than one-tenth of what they are today. But some of the most highly anticipated IPOs of recent years are currently trading below their initial offering price.

While there were a number of high-profile unicorn IPOs that flopped this year, 2019 was a relatively good year for IPOs overall. Here are some of the best-performing IPOs of 2019:

Many analysts believe that 2020 will be an even bigger year for IPOs than 2019. Here are a few companies that investors speculate may have IPOs worth investing in in 2020:

As traders search for the next Amazon stock, it is important to remember that investing in the IPOs of even the most well-known companies can be unpredictable, and only time can tell what a $1,000 investment today will be worth tomorrow.

To see the research and sources behind this project visit – http://bit.ly/IfYouInvested1000