Home » How to Free Yourself From Your Smartphone 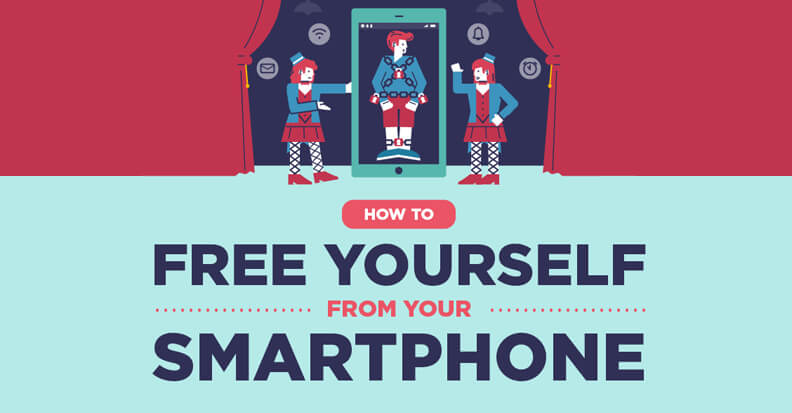 How to Free Yourself From Your Smartphone

Data gathered by research firm Dscout reveals that the average person spends 2.4 hours a day tapping, swiping and staring at their phone screen. And for a ‘heavy user,’ this number increases to 3.8 hours. But it can be difficult to determine whether you rely on your phone too much – especially when the devices themselves affect our brain power.

A study from Microsoft shows that since 2000, when smartphones started to gain popularity, the average attention span has dropped from 12 to 8 seconds. That’s one second less than a goldfish’s. And what do we do when nothing is occupying our attention? 77% of us reach for our phones.

One way to stop your phone from luring you in is to disable push notifications. Deep Work author Cal Newport says these pings can rewire our neural patterns. Because we’re so fixated on the next alert – and the feel-good dopamine it releases in our brains – we have trouble focusing on other tasks. If you want to start small, try turning off social media app notifications first.

There are other techniques that help prevent endless scrolling, too. Former Google ethicist Tristan Harris suggests scrambling your apps regularly so your thumb doesn’t get in the habit of reaching for the same ones. Try moving “bottomless bowl” apps like social media and games off your home screen.

And if you’re ready to remove your phone from the picture (at least sometimes), make sure you don’t use it as an alarm clock. A Time/Qualcomm poll found that 4 out of 10 adults check their smartphone throughout the night. To improve your sleep, get a real alarm clock and let your phone charge overnight in another room – on silent.

So, how dependent are you on your phone? Answer a few questions to find out – and then try implementing our science-backed tips to cut down on your screen time.

Winnick, M. (2016) Putting a Finger on Our Phone Obsession. blog.dscout.com
Barker, E. (2017) This Is How to Stop Checking Your Phone: Five Secrets From Research. observer.com
Yildirima, C. and Correiab, A.P. (2015) Exploring the dimensions of nomophobia: Development and validation of a self-reported questionnaire. sciencedirect.com
Turner, A. (2015) 5 Simple Tips to Spend Less Time on Your Phone. mashable.com
Kushner, D. (2017) Coping with Fear: Face It, Understand It, Overcome It. psychologytoday.com
Pappas, S. (2015) Oxytocin: Facts About the ‘Cuddle Hormone’. livescience.com
Pontefract, D. (2017) Push Notifications Have Become the Death of Thinking. forbes.com
Loh, K., and Kanai, R. (2014) Higher Media Multi-Tasking Activity Is Associated with Smaller Gray-Matter Density in the Anterior Cingulate Cortex. journals.plos.org
Duhigg, C. (2014) The Power of Habit: Why We Do What We Do in Life and Business. Random House Trade Paperbacks.
Gander. (2017) How To Quit Your Smartphone Addiction, According To A Google Ethicist. independent.co.uk
Hosie, R. (2017) The psychological reason you can’t stop checking your phone. independent.co.uk
Hough, A. (2011) Student ‘addiction’ to technology ‘similar to drug cravings’, study finds. telegraph.co.uk
Khazan, O. (2015) How Smartphones Hurt Sleep. theatlantic.com
Dillner, L. (2013) Should I keep my smartphone and tablet out of my bedroom? theguardian.com