Home » How Much Does It Cost to Produce an Episode of Your Favourite TV Show? 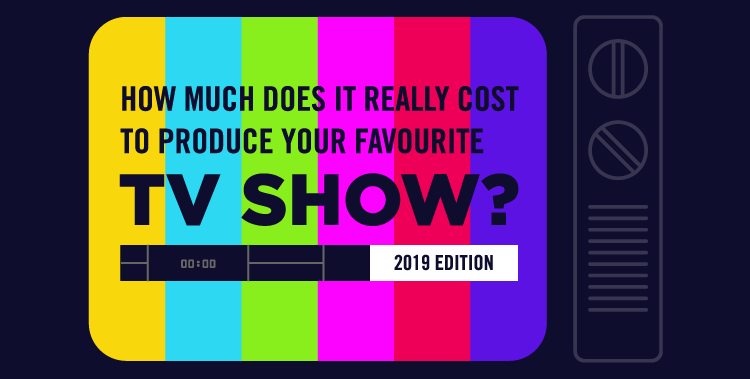 How Much Does It Cost to Produce an Episode of Your Favourite TV Show?

Television: always on hand to offer a fabulously aspirational or unimaginably grim alternative to the troubles of daily life this side of the screen.

But such hope and/or destruction doesn’t come cheap. Better and more ambitious shows from a growing roster of minted production companies have led to an out-and-out budget war. Far from the wobbly sets of yesteryear’s ‘television plays,’ today’s series rival the costs of Hollywood blockbusters.

Since we last looked at the costs of the top TV shows in 2015, the budget of Game of Thrones almost doubled to £11.8 million per episode – and the show has come to a bewildering end that left audiences asking if they’d got their money’s worth.

The final season is the worst rated on Rotten Tomatoes, scoring just 58% from the critics and 33% from audiences. All the same, the finale, which was the lowest-rated GoT episode ever with a mere 4.2/10 on IMDb, broke HBO’s viewership records regardless of its perceived shortcomings.

Pound for pound, however, it’s a British show that offers the best value for its producers’ money. Peaky Blinders costs around one-tenth of the Game of Thrones budget and rates at 8.8 on IMDb. “Reservoir Dogs with tweed waistcoats,” as the Telegraph’s TV critic put it, hinting at the gritty low-budget appeal, “gets better with each passing series.”

Our new guide to the cost of producing the best and worst rated shows on TV in 2019 reiterates this sense that it’s not always the size of your production budget that counts, but what you do with it. The costly robots of Westworld are rivalled in ratings by the non-union zombies of The Walking Dead for a third of the price; Lost In Space was just as mediocre as the decidedly more earthbound NCIS: New Orleans.

And in the short-term, with the complete series rating hovering around 9.5 on IMDb, Game of Thrones still manages to top our new table as both the highest rated and highest costing show. But when you consider the bitter taste on the tongues of millions of disappointed HBO subscribers, would a more thought-through finale have been a better investment than all that extra cash? Or are GoT fans just sour because (as experts suggest) they’re going through an end-of-show ‘break-up’?

We gathered our research primarily from production news sources such as Bloomberg, Variety, the BBC, and Reuters. We then supplemented these figures with progress reports released by the California, Louisiana and New York state film commissions. Finally, we corroborated the numbers by reviewing interviews featuring the show runners and producers discussing their budgets.

Berman, N. (2016). Why It Costs Some Animation Shows Up To $2 Million To Make A Single Episode. moneyinc.com

Collins, S. (2015). Empire and its phenomenal ratings a top priority for Fox. latimes.com

Lloyd, R. (2018). Netflix’s Decidedly 21st Century reboot is worth blasting off with. latimes.com

Reddit. (2019). So, this is the budget for season 9, can anyone confirm if it’s higher or lower than previous seasons?. reddit.com

(2016). The astronomical cost of making The Big Bang Theory. news.com.au