Home » How to Stop Saying “Like” All the Time 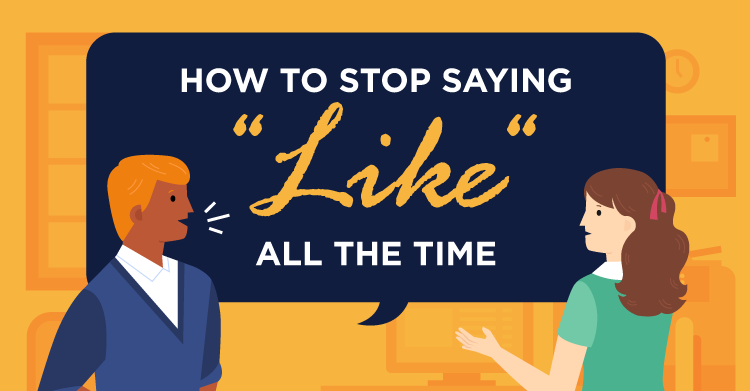 Are you, like, addicted to using verbal fillers or something? A verbal filler is a word like “like” that you drop into the middle of your sentences when you’re nervous or searching for the right word. Other fillers include “um…” and “you know,” but none has quite the bad reputation of “like.”

“Like”-users don’t entirely deserve the scorn that is poured upon them. Psychologists have described how people that dot their sentences with unnecessary “likes” are perceived as uninteresting, dishonest, or even lazy. But that’s just the perception. In fact, researchers have shown that overuse of filler words may indicate that the speaker is thoughtful and conscientious. They add modifying words because what they have to say is nuanced.

It’s a shame that this nuance goes over most listeners’ heads. Fortunately, rather than continue to be misunderstood, “like”-users can neaten up their speech patterns with practice, discipline, and rhetorical techniques.

Slowing down is a powerful way to add gravity to your speech and give you time to think of a better word. For example, some people use “like” to add emphasis: “he was, like, so scared.” But English is a very rich language, and you should be able to find a word that’s strong enough to carry the emphasis by itself: “he was terrified.”

You might also turn to the professionals for inspiration. Sports commentators talk for hours at a time and never come close to uttering a verbal filler. They know when to pause for thought, how to use their voice and vocabulary for emphasis, and how to talk their way out of a hole. Listen carefully and it’s almost like music – and there’s nothing to stop you learning how to play.

We’ve put together a “like”reducing guide to help you get started. Try using some of these alternative words and mindful techniques to squash that filler out of your speech.

There’s no crime in talking the way you naturally do, but having the courage to explore the full range of your verbal skills can help you to make a better impression on the people you meet.